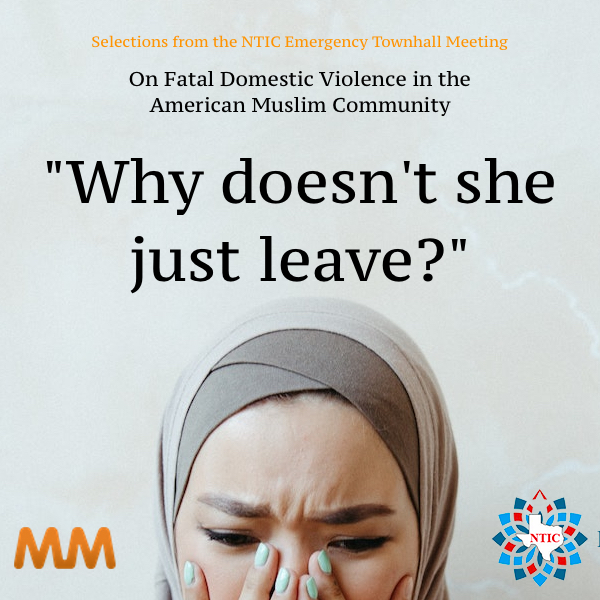 One of the things I hear as a mental health professional is “Why doesn’t she leave?” It’s important to remember that a woman will try at least seven times to exit an abusive relationship before she actually exits. There are a lot more of those depending on the financial situation and the dependencies involved. It is really hard.

We think that the hitting, or beating, or the violence happens in isolation, when it is embedded with a lot of love in between. It confuses a person so much and leaves the person kind of trapped. These are very, very important components that we need to understand about domestic violence abuse in a relationship.

There is a big psychological component of struggle when it comes to those relationships. And in family violence it’s not just marriages, it’s elder abuse, and child abuse as well.

I want to acknowledge the idea of a mother hitting her child. When you as a mom hit your child, you’re making it okay for your son to hit his wife. So, I want women to also take responsibility for the sons and daughters that we are raising. Yes, absolutely, the issue globally lies with male privilege and there’s a lot of work that needs to be done by men, but I don’t want to discount the fact that there are some of us that need to also work on ourselves.

I know that we’re not solving domestic violence today, we’re hoping to have a talk about it. When you talk about it, especially men, when you talk about it in our circles, please don’t be harsh in your language. You have to understand – and I know right now I’m telling you to empathize with a perpetrator- that if you’re strong and judgemental in your language, a person who is committing domestic violence will not open up, and they will shut down. So, being kind and understanding on both sides is important because the ultimate goal is for them to get help, for the woman to exit the situation, or for there to be mental health and other interventions.

So, as far as the overlying question “Why doesn’t she does she just leave,” the mental health component most relevant here is the after-effect of trauma and the bond that gets created in that cycle of abuse where abuse gets mistaken as love. The bond that’s created from resolving the abuse is what we call trauma bonding. So, bonding over the resolution of trauma.

In a healthy marriage, the husband and wife turn to one another when there’s any kind of conflict to resolve that conflict. In a healthy marriage, that’s what you hope will happen. Whether husband upsets wife, or wife upsets husband, they will come together and communicate through and resolve the conflict. In a relationship where there’s abuse happening, it doesn’t go the same way. There’s a power differential.

The person that is abusing has a higher degree of power and has disempowered the person they are abusing. The person who’s being abused, especially when they’re cut off from the rest of the community, is going to turn to the abuser to try and resolve that conflict, except that they’re coming at it from a much more disempowered position, and from a much less privileged position.

And so, the resolution of the conflict to try and overcome whatever abuse just happened gets conflated with love. Even in the cycle of abuse, there is an element of affection that happens from resolving a specific incident, and there’s almost like a prodrome before an incident of abuse happens. And then, that cycle repeats, and then, typically, that cycle gets shorter and shorter where there’s less and less of that affection piece.

So, much like mental health in our communities, divorce is also really stigmatized. Somebody going through a divorce is likely going to be very isolated, maybe made to kind of stay low, and keep low, and not have a lot of resources as far as emotional or moral support, let alone material or financial support.

It’s really hard to leave a marriage from a mental health perspective too. Even in an abusive marriage, there is still the grief that happens around losing a relationship, ending a marriage, and ending the dreams that one had when they entered the marriage. There’s a real grieving process that must be gone through to cope with that. And so, there is the impact too of the depression, and the despair that can come with divorce that’s not easy for anybody to go through.

The Myth of the Depression-Proof Muslim

There are a few different dimensions when it comes to that intersection of mental health and staying in an abusive marriage.They are related topics, and I think stigma is sort of an overlapping dimension as well.

There are also substance abuse disorders, like alcohol and drug addiction, and the obsessiveness, distortion of reality, and spousal neglect that can come with those. And then, conversely, those things can happen as a result of abuse.

So, there are a whole range of mental health conditions that can impact a marriage in any capacity. I think as we talk about domestic violence, mental health and divorce are corollary discussions.

Say, ˹O Prophet,˺ “If you ˹sincerely˺ love Allah, then follow me; Allah will love you and forgive your sins. For Allah is All-Forgiving, Most Merciful.”

Allah is talking to us, and if I was to ask you all, “Do you love Allah?” I’m sure that everyone in this room would say what? Of, course, yes.

Allah is saying that  if you really love Allah, prove it. How do you prove it? You prove it by following the Prophet Muhammad ﷺ,  and if you’re able to do that, Allah says that Allah will love you and forgive your sins.

The precedent of the Prophet Muhammad ﷺ – who understood, and implemented, and manifested the Quran and the Shariah (Islamic Law), and the religion of Allah Subhanahu Wa Ta’ala – is the one that we need to follow. Now, when we look at the Prophet ﷺ, his beloved wife Aisha, who got to see the most intimate parts of him, described him as being a walking Quran. Everything he did was a manifestation of the Quran. So, I just want to take this opportunity to share with you all a few teachings from our beloved the Prophet’s ﷺ life that Insha Allah I hope will inspire us to truly understand how beautiful our religion is.

There is a very foundational narration from the Prophet ﷺ where he said that there should be no harm nor reciprocating of harm – that we should not harm one another. The Prophet ﷺ also said that one of the definitions, or the characteristics, of a Muslim is the one from whose tongue and hand people are safe from.

Physically we should be safe from one another. Emotionally, the Prophet ﷺ also said that it was enough as an evil for a person to look down on another person. There are so many examples of love, mercy, and kindness, and we never once find an example of oppression or abuse.

“What will people say?” [Part 4] On Fatal Domestic Violence in The Muslim Community

“But that’s not abuse?” [Part 2] On Fatal Domestic Violence in The Muslim Community