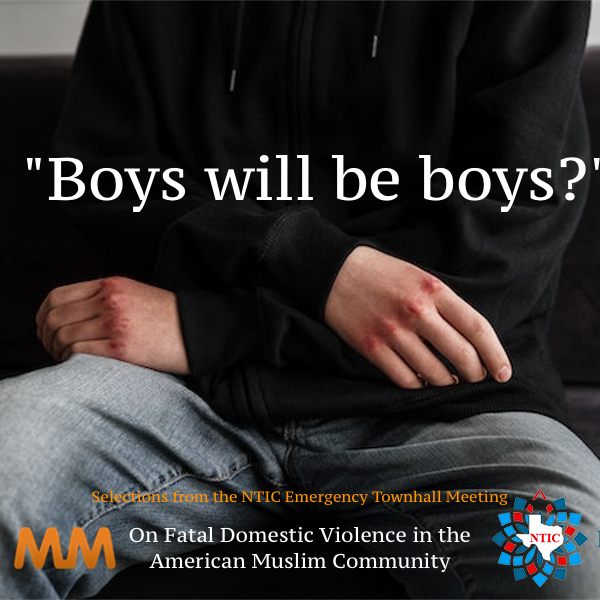 Muslim Matters is proud to have been the media sponsor for the North Texas Islamic Council’s emergency town hall, and we invite the community to see our complete list of resources on the topic here. The following excerpts from this event have been edited for brevity and clarity.

What we do know about domestic violence is that it has no gender, no religion, no inequity when it comes to its victims. However, in the context of this talk today, there is a gender inequity, and that’s the light that we want to shed for our future Insha Allah, and for the youth of the generation.

The World Health Organization does say that one in three women suffer from some form of domestic violence. That’s one in three, and the latest global statistic is of 2021, so we’re talking in less than a year.

What we see as therapists is that the cycle of abuse and violence starts with a feeling, it goes into a thought process, and then there’s a behavior activation. So, oftentimes the people who get dysregulated in their anger go on to actions of violent behavior.

Self-reflect. It starts with each of us individually first, and from there we come together collectively Insha Allah to erase, to eliminate this cycle, and provide resources for those that are suffering silently. My hope and my ask for all of you attending today is to please ensure that you take a moment for that self reflection, we don’t need to be complicit anymore. We have too many lives and too many generations that we can save, Insha Allah.

I grew up in a Muslim community, and I have experienced the same story that I hear from so many young girls who also heard the same thing. If there was any sort of occasion when a young girl would be in a situation where a male or young boy would be rough with her, or rude, would or aggressive, or belittle her, anytime that would happen the parent, or the adult, or the teacher, or whoever would give the same message, “Don’t take it seriously, they’re just boys. Don’t take it personally. You will be fine. You can handle it, just move on.” And 9 out of 10 times, they would never talk to the boys.

The boys would just go on. They might get a little nudge saying, “Hey, don’t do this anymore.” But that was it. It would always be, “Let’s pull the girls inside, let’s give these messages, and never have a conversation with the boys.”

And what’s the message here? The message is that boys have no accountability. There is no responsibility for their actions. There’s no weight in what they’re doing and it’s not taken seriously. So naturally, we start minimizing the behaviors of men, and behaviors of young boys no matter how negative or how little it is. And what’s interesting is the way this gets internalized.

Young girls grow into young women who start to – within themselves – minimize these behaviors. They’ll go and look at a male being aggressive with them, or violent, or rough, and try to minimize it because that’s what they’re told. They’re told that it’s not a big deal, it’s not that serious, it’s not that bad until it gets to the point of being too bad. And that’s what we notice with abuse, that it starts off small. It does not start off as a big thing.

It’s Just a Joke: Making Fun of Women in our Lives

We have the tendency to already minimize what abuse is and not take it as seriously, and I think that’s the biggest scary part of this. I’ve had – even though I’m just starting in the field of mental health and mentorship – way too many conversations with young girls and young women who had experiences of abuse, but don’t see it as abuse.

It’s such a difficult conversation when you’re looking in their eyes and having to actually identify that what they experienced was crossing the line. The thing that boggles my mind is even in those cases, they will try to minimize it, they will try to excuse that abuse or excuse those behaviors. And I think that’s one of the biggest takeaways that I want the adults in this room, the teachers, the Imams, and the leaders to understand- the weight of your words and how, especially with young kids, those messages gets internalized.

Your words become the foundation of how they believe and how they grow, and we need to start holding our boys accountable. We need to start actually having those conversations with them, and we need to stop telling our girls that it’s okay.  It isn’t okay and we don’t want them to believe that love and violence can be side by side in any sort of way.

I don’t see that domestic violence is more prevalent in the Muslim community than it is in others. 13% of families will experience violence of some kind regardless of religion, regardless of culture, so we’re not unique in that we have unfortunate incidents. Just being part of society, this is going to affect us.

The thing we’re doing, which may be different from how other people do things, is how we raise our kids.  Maybe we tend to resort to corporal punishment and believe that hitting will produce results, even for doing salah (prayers).

There are some people who when they make their kids pray  salah, they say, “We hit him or we threaten him to act.” That’s something we can do something about, because according to the social learning theory, it says that this behavior is learned. Some people argue that maybe it’s in-born, that it’s in your genes to be violent, but studies and research indicates otherwise.

It is a learned behavior to be violent or to resort to violence in an attempt to solve a problem. That’s what it is. If somebody gets frustrated and they don’t get their way, when they want to solve a problem they resort to hitting. It’s a shortcut instead of communicating or having good solutions for this problem.

Anger is a normal emotion. It’s something you’re born with. If you never get angry, if you have no ability to get angry, something’s wrong with you. Aggression is what you do with this anger, how you express this anger, and this is learned.

So, if you tend to flip the table, lash out verbally or physically at someone when you get upset, chances are you learned it from your family of origin. Your parents hit you or hit someone in front of you. And so, then you learned how to solve problems. Later on, when you get married, your wife does something you don’t like, shortcut; hit. Violence is not only killing, but violence is in many ways. It’s lashing out verbally, and sometimes, threatening to hit someone, that might fall under the category of aggression.

I say if you don’t want your kids to be violent, or to resort to violence, don’t hit them. I had a parent come to me, she said, “I have a problem, my seven-year-old hits the kids at school, so we need counseling.”

I said, “Okay. Now, when he does something wrong at home, what do you do?”

I said, “Okay. You are teaching him how to solve problems by hitting.” So, again, I would like for us to be educated about the difference between anger and aggression. Anger is a normal feeling, aggression is not. Aggression is learned. Chances are you learned from your family of origin. So, if you want to do something about it, try to help your kids learn to solve problems without resorting to violence.

I say this as a reminder to myself, most of all, and to my fellow brothers, that one day our Creator will ask us if we fulfilled our obligations to the women in our lives. If we upheld, protected, and honored our mothers, our sisters, our daughters, our wives.

Four Ways to Help a Muslim Victim of Domestic Abuse

So, what can we do realistically? Logistically? Well, you guys already did the first thing, we’re all here at the panel increasing our knowledge, trying to understand the issue better. And this, Insha Allah, in turn, this increase in knowledge will allow for more discussions at home. We can de-stigmatize this issue over time and have conversations with our loved ones.

One of the most popular questions asked is, “Why doesn’t she just leave?” But I’ll answer that with my own question, “If she wants to leave, where does she go?” because we clearly do not have nearly enough culturally sensitive domestic violence shelters in our city.

To the brothers that helped build the basketball gym in our masajid to try to get me to come more, I urge you all again to please allocate funds, allocate resources to these organizations so they can expand their shelters or build new ones even.

And as for the youth, Alhamdulillah, we have access to social media in which movements can just explode and spread like wildfire. Alhamdulillah, now that we’re increasing our knowledge and our understanding of these issues, we can take this information that we have, take it to our schools, or community centers, or universities, start clubs, and many more things. And of course, I’ll be sticking around here until MSA kicks me out, Insha Allah.

I feel very grateful that now that we’re starting to take more steps forward, I genuinely feel like we’re making bounds and leaps, and we are progressing Insha Allah towards the end of an issue that has no reason to exist in our society.

“But that’s not abuse?” [Part 2] On Fatal Domestic Violence in The Muslim Community

This Festival Is Not For You And Me: Talking To Young Muslim Children About Halloween