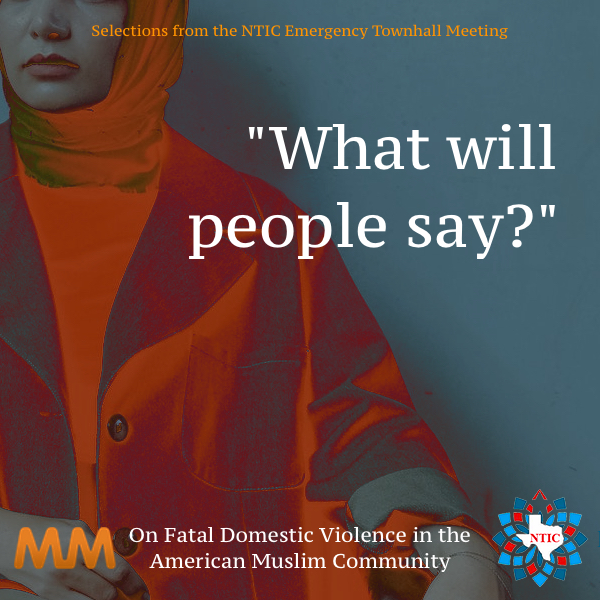 As a media professional, I am immersed in what the people say. I’m online, I’m on social media, I manage comments sections, and what we see in the big picture is that some of the factors that keep women from getting help and from leaving abusive marriages are what the people are saying.

What will her parents say? What do her friends say? What will the Imam say? Do the people say ‘Oh that’s not abuse’ or ‘You should be grateful’ or, ‘’He said sorry, so why are you being so selfish?’

‘Why do you have to leave?’

‘Can’t you think of the children?’

A litany of questions get posed to victims that prevent them from seeking help, from even seeing the situation as abuse, and from being able to access professionals in our community who could benefit them. They are overwhelmingly directed against those suffering from abuse, instead of questioning those who perpetuate it.

This is important, because the things we say to each other become the narrative of our community, regardless of whether they deserve to be or not. Instead of shaming abusers, we shame those seeking to escape them. Instead of asking abusers to answer for their actions, we ask their victims what they did to deserve it. We pretend that all marriages are a dream and every divorce is a nightmare. Through what the people say about women seeking divorce, we make it seem haram when Allah made it halal.

When we make divorce seem worse than death, then we make abuse seem better than the shame and isolation that divorced women can face in their own communities, and even from their own families. Some people would rather die than get divorced, and others would rather kill instead.

In May of this year, Sadia Manzoor was shot and killed by the husband against whom she had reported domestic violence. They were living apart when he showed up and shot Sadia, her mother, their four year old daughter, and then himself.

In July of this year, a Muslim man drove 11 hours to his ex-wife’s home where he first shot her in the head, and then himself. Sania Khan was only 29 years old.

Less than 20 hours later, Alwiya Mohamed was shot and killed by her husband, who then turned the gun on himself.  Their one-year-old son was home at the time.

We have to change the way that we talk about marriage, abuse, and divorce in our communities because regardless of what role we play, we are all a part of “what people say.”

We may not be the abusers themselves, but as bystanders, are we still going to tell victims to stay beaten, humiliated, and killed so that we don’t think less of them? Can we really allow Muslim women to be beaten and killed while we look the other way, or ask what she did to deserve it?

Torment And Tears: The Emotional Experience of Tawbah

On the Day of Judgment, when Allah gathers all of humanity to account for all its good and all of its evil, what excuse can we give for turning a blind eye to abuse? Can we say to Allah, “But I’m not the one who pulled the trigger,” when Allah asks why we looked the other way? Why – even when we knew she was being beaten and threatened – we chose to protect the honor of her abuser instead?

The answer is no. If your heart bleeds for Muslim women and Muslim children murdered by non-Muslims, then it should bleed twice for the Muslims murdered by other Muslims. Compelling women to stay in abusive, dangerous marriages doesn’t “preserve the marriage,” it destroys the entire community instead.

For too many of us, our culture is really our religion. We think we understand Islam, we think so MashaAllah, but really we have convoluted it. Sometimes when a sister, or whoever that comes forward, is seeking to talk about abuse, there is this concern. There is this burden they carry as if they’re committing a major sin by meeting, by talking about abuse, and that should never be the case.

“And if you sense ill-conduct from your women, advise them ˹first˺, ˹if they persist,˺ do not share their beds, ˹but if they still persist,˺ then discipline them ˹gently˺.2 But if they change their ways, do not be unjust to them. Surely Allah is Most High, All-Great.”

There is an ayah (verse) in Surah Al Nisaa that has unfortunately become infamous – that Walllahi Azza wa Jall –   should never have become infamous.  That is due to the abuse and misunderstanding about the steps in which conflict within marriages take place. The first step is that there should be this aspect of dialogue and speaking, and a resolution through communication. If that doesn’t work, the second step is to let there be something on the emotional side. Don’t sleep together in the same bed and let that be a sign to show that this is really serious now. And then, only after the first two steps, comes – وَٱضْرِبُوهُنَّ ۖ,

I had a person, a sister, call the masjid asking, “Is it true Allah in the Quran commands the husband to beat his wife? Because my husband beats me every single day and says Allah commands him to.”

I don’t know if we read the Quran or not but SubhanAllah, among the things that Allah SWT asks  is “وَمَنْ أَظْلَمُ مِمَّنِ ٱفْتَرَىٰ عَلَى ٱللَّهِ كَذِبًا ۚ”  Who is worse than the person that attributes lies to Allah?

Part of that cultural abuse is that we have issues that people want to sweep everything under the rug and make sure that whatever we’re doing of haram (forbidden) nobody knows. The impact of that is how it’s breaking up families, how it’s exacerbating mental illness, and how it’s causing our youth and our children to walk away from Allah.  Because they assume that, “Oh, my parents MashaAllah, my family, they are Muslims so this has to be Islam.

It’s hard to say this, but in the same way I talk to non-Muslims, I tell those youth that we need to disassociate Islam from Muslims. Wallahi as Muslims we have to be on the same level.  Islam is one thing, Muslims all too often are another.

And so, when we’re talking about this issue, it is a very difficult one. And as Muslims, we want to avoid things that are uncomfortable and things that are difficult. However at the core of it, the causes of abuse mean we have to look at ourselves and to change. All too often, we think that we are just fine the way that we are.

Honestly, we need to understand that the preventive perspective in Islam is golden, and so, premarital attention is where I think we really want to focus. All too often, we are caught up on the wedding – the Masha Allah of these physical things. But the substance of what the marriage is supposed to be, that is going to take the person and carry them through InshaAllah until the angel that death comes to take their soul, very little attention is given to that.

I wish that as Masajid, that we could establish a policy that says nobody gets married until they have successfully gone through some form of premarital counseling, and then those counselors communicate with us and say, “Yes, they have truly completed it.”

If someone says, “Why do we have to get feedback from them? Following such things is foolish.” I reply that we really need to have something to show that people are mature, that they have that depth of character and of understanding, Insha Allah, so that they will have a better chance of having what Allah meant marriage to be; A source of tranquility because of the two ingredients, love and of kindness.

I deal with women who come in searching for a divorce, searching for answers, or searching for a solution to their situation. Because of what people will say, many times they don’t have the right information on what happens in a divorce, or what happens if they’re seeking to separate from an abusive person. Their spouse will tell them, “Well, you’re never going to see our kids again. If you decide to divorce me, I’m going to take away your kids.” But that’s not true.

According to the law, both parents have rights to their children, and in the case of abuse, it’s the abuser actually who doesn’t have the rights. So, it’s important for women – because most of the time it is a woman – to understand that she will have rights to her children.

The other thing I deal with is the financial aspect. Women don’t want to leave abusive relationships because they don’t earn a living. People say, how will they take care of themselves and the children? So there is – according to law – spousal support. There is child support. That may not cover everything, but you’re not just going to be left on your own. Women don’t have information regarding the legal system that could otherwise ease that process, if they just knew. Many women are afraid of taking that step because of the lack of information.

I have women that come to me later in their lives, in their 50s or 60s who say, “I wish I had done this earlier. I wish my kids didn’t have to live through this trauma which they now carry to their children.”

Domestic Violence Is Killing Us. What Are You Doing To Help?

“Why doesn’t she just leave?” [Part 3] On Fatal Domestic Violence in The Muslim Community