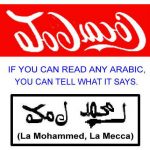 If you can read Arabic, you know the person who wrote this does not understand Arabic

There seems to be an obsession with conspiracy theories among young Muslims these days. For some strange reason, Muslims seem to look for secret messages in almost everything. From cartoons to people’s names, nothing is innocent and all seem to be part of a secret plot of some underworld organization.

From an Islamic perspective, it is not proper for Muslims to dwell on conspiracy theories. Islam teaches us to focus our efforts on Ilm-Naafi – knowledge that benefits us and not to get involved in Laghw – useless discussions. For the most part, conspiracy theories are useless discussions in which we cannot prove the conspiracy to be true or not, and even if you can, the information gained can seldom help you gain closeness to Allah or benefit you in anyway. Conspiracy theories in general fall into the category of Laghw and waste precious time that could be spent in more beneficial activities.

I have identified a few reasons why Muslims seem to be obsessed with conspiracy theories:

1. To find somebody else to blame for our mistakes:

Some Muslims don’t want to accept the fact that we are in the situation we are in because of our disobedience of Allah or deviation from the straight path. Such Muslims tend to look for a scapegoat to blame for their mistakes, and conspiracy theories provide enough of these. If you look at the people who tend to be obsessed with conspiracy theories, many of them are generally not knowledgable or practicing Muslims. It is not uncommon to find Muslims discussing how the Jews or Illuminati are the cause of all their problems and miss a salah due to the discussion.

Solution: The Qur’an does not teach us to blame others for our problems. It teaches us to strive to please Allah and then He will assist us in solving our problems. It would be better to utilize our time to watch Islamic lectures instead of a conspiracy documentary, and to pray and strive to implement our knowledge than to sit around discussing who was behind an earthquake or flood and how they caused it.

Many Muslims try to find ways to kill time, as if time needs killing. You’d think with all the problems in our lives, our own sins and weaknesses, we’d have a lot more important things to do than kill time. Sadly, many Muslims suffer from boredom and thus browse YouTube for something to kill time. It is during these moments in which they wanted to kill ten minutes that they discover a conspiracy theory video which ends up eating up hours and sometimes days of their lives as they watch, rewatch, discuss and obsess over it.

Solution: Utilize your time properly and wisely. There is so much that we need to do that we really should not have time to kill. If you are bored and decide to surf YouTube, then it would be better to spend your time watching Islamic lectures or if you need to relax, a nasheed video. Just don’t give Shaytaan a chance to trap you into an obsession that can waste hours of precious time.

3. Lack of understanding of the religion

Solution: Consult scholars and learn from them what constitutes beneficial knowledge. Oh, and make sure the Islamic DVDs you buy are really Islamic.

I am sure there are many other reasons why Muslims love conspiracy theories, maybe someone else can help me understand this obsession.

Some of these conspiracy theories can be very funny. Take a look at the following examples:

This one circulates a lot via email and it seems that many Muslims seem to believe it (why else would they forward the email), yet it is extremely illogical. Why would someone when naming a soft drink, try and decide what is ‘No Muhammad, No Makkah’ backwards with the backwards word being Arabic and the forward word being English? Furthermore, even if you squint and twist the letters, you still can’t see it. The closest you get is maybe ‘Lee Muhammad, Lee Makkah’, meaning ‘for Muhammad, For Makkah’, which makes me wonder why conspiracy theories are never pro-Muslim or positive?

Looking at words backwards to find secret messages can be very dangerous as then one can find hidden messages in good words like god and live. In fact, one can even deduce that Godzilla is a Muslim’s pet as Godzilla backwards is Alliz dog.

2. Zakumi is named after a tree in Hell

Before the World Cup occurred, I heard during a Jumu’ah lecture that one of the reasons the World Cup is haraam is because its mascot is named after a tree in Hellfire, Shajaratuz-Zaqqum. Firstly, Zaqqum and Zakumi are not the same word. Secondly, nobody names their mascot after a tree in Hell in any language; I doubt the people who named him even know Arabic or what Zaqqum is. Finally, Zakumi means SA2010, that is all it means, No hidden messages, no hidden agendas, except to sell more World Cup merchandise.

Firstly, Pokemon means pocket monsters. Secondly, what does poke Imaan mean? Is it a good thing or a bad thing? And finally, how do you poke Imaan if it does not have a Facebook account?

Can splitting a name really expose hidden messages? If thats the case, let us look at the word Wahhabi and I’ll show you how easy it is to invent a conspiracy theory and get caught up in it. Note the following is fictional humor:

Wahhabi is actually two words Wa and Hubby, Wa is the Arabic for ‘and’ while hubby is English slang for husband, so wahhabies actually means ‘and husbands’ this is because the Wahabbi movement is actually a cover for polygamous Muslim men wanting to take multiple wives. This also explains why many Westerners dislike wa-hubbies, because they are anti-polygamy!

So what do we learn from this? Lets not waste our lives looking at words backwards, or splitting names to find secret messages. Let us focus our brain power on learning, understanding and implementing Islam our lives. This will be more beneficial for us in this world and the Afterlife.

Yahya Ibrahim | Un-Dawah: Obscuring the Truth with a Repulsive Attitude