“Why did they put that on him? I don’t like it….Ugghh….Why?”, grumbled my collaborator during an academic meeting about our research project last week.

He was expressing his utter dissatisfaction with the black Qatari robe (a bisht) placed on Lionel Messi as he lifted the World Cup. The now infamous picture came up for discussion as it was on the presentation slides by the Argentinian members of our international team. They prefaced their research updates with an understandable explanation on why they had been a little distracted from work lately.

Of course, my Argentinian colleagues were overjoyed with their triumph at the 2022 World Cup. While I didn’t hear them complain of the black robe, I was struck by all controversy over this simple piece of cloth playing out in the media. What should have been an innocuous gesture of honoring the winners by the host nation ended up creating a major media firestorm which almost overshadowed the real story.

As is often the case, it is not the mere piece of cloth itself which creates controversy but what it represents in the eyes of the onlooker. It is the ‘Us vs Them’ mindset which stirs such extreme outrage over non-issues; a mindset that is deeply troubled by any gesture that could lead to the acceptance and normalization of another culture which it perceives to be foreign, backwards, and threatening.

Qatar has been the subject of criticism since the very beginning when it first won the bid to host the event back in 2010. This has related to the mistreatment of migrant works, LGBTQ rights, and restriction of civil liberties. When the sporting event started, criticism only intensified; protests were held and boycotts were called.

Piers Morgan summarized this issue best when he quipped, “Who amongst us is morally clean enough to host a World Cup?” The politicization of a global sporting event is nothing new. Last year, we highlighted the diplomatic boycott of the Beijing Winter Olympics led by the US against China for its treatment of Uyghur Muslims. While such a gesture would be welcome by human right activists, the self-interest and opportunism in the ban was evident. The US, for example, would not sanction Israeli entities involved in human rights abuses in Palestine, or Indian entities guilty of crimes perpetrated in Kashmir. These double standards serve only to validate that age-old pattern of EU and NATO foreign policy being driven by geopolitical interests, rather than bona fide concern for democracy or human rights.

The criticism and moral indignation from EU countries towards Qatar is in line with the standard approach of smearing any positivity and progress emerging from the Muslim world. This is entirely expected and should not surprise anyone. It is unlikely that the next World Cup being held in the US would generate any criticism or boycotts in light of the illegal wars waged by the country or the continued support for the illegal occupation of Palestine. Similarly, the criticism of Russia for its human rights record when it was host was comparatively mild in comparison to Qatar.

The Muslim Response: Amiss and Apologetic 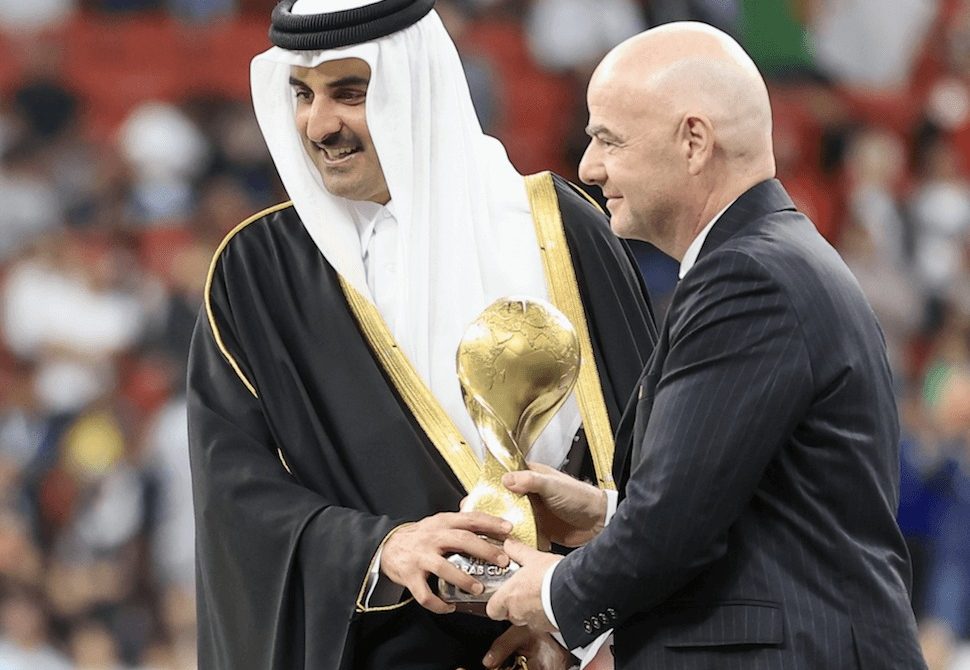 While the double-standards and hypocrisy in the media coverage is congruent with global power dynamics, what was perhaps more amiss was the response from the Muslim world, particularly over social media. Many jumped to defend Qatar and the standard answer to criticism was along the lines of: “Sure, Qatar mistreated migrant workers and restricts civil liberties – but nobody is perfect, and other countries abuse human rights too. If you criticize Qatar, it is only because you are Islamophobic. Look how well they are representing Islam and bringing people together!”

This defensive and apologetic response highlights an ethical fallacy emblematic of a victimhood mindset which is pervasive in much of our collective Muslim psyche. For starters, it sounds very much like the Muslim version of “If you criticize Israel, it is because you hate Jews and are antisemitic. Look at all the horrific things other countries are doing, why focus on Israel?” Just like criticism of Israel can be driven by antisemitism instead of a genuine concern of human rights, criticism of Qatar or any Muslim country can be driven by Islamophobia. However, it is impossible to know the intent of the critic and we cannot be resorting to the same self-serving faulty logic when defending a part of the Muslim world.

Furthermore, it should be evident that the modern nation state is entirely interested and driven by its own socioeconomic interests. Qatar is no different, and it hosted the World Cup to advance its own economic and geopolitical influence in the region. The country obviously was not spending billions on this event solely for the “Ummah’s sake.” While the effort by Qatari authorities to represent the Islam in a positive light is welcome, this should not be a reason for putting the country beyond reproach.

Many have also tried to label the hosting of a World Cup by a Muslim-majority country as a crowning achievement and sign of great progress. However, the same event has been hosted numerous times by much poorer countries with far lesser resources. It was hosted by Latin American countries like Uruguay, Brazil, Chile and Mexico over 50 years ago. So, the ability to host a sporting event as a benchmark for progress is not a great strategy. The surprising thing should be that it has taken this long for a Muslim country to host such an event.

Additionally, one has to wonder about the astronomical cost at which all this came: over $200 billion spent over the last 10 years. With such a massive amount of wealth, Gulf countries have a responsibility to see how their resources can help improve the state of the Ummah as a whole. This kind of money could solve the on-going debt crises in countries like Lebanon, Afghanistan, Egypt, Pakistan and Sri Lanka. It can revive the crippling economies in much of the Muslim world and help bring millions out of poverty. It is enough money to end the famines in Somalia and Yemen. Alas, the money was instead spent on building stadiums for a month-long sporting event.

However, whichever way one looks at this World Cup, there is no denying that Qatar pulled an incredible feat for a small nation. It delivered a fantastic show, proved the naysayers wrong, and has placed itself on the world map. It helped highlight sports talent in the Arab world, and the success of teams like Morocco can in part be attributed to the “home advantage” the country has offered. Despite all the attempts to malign the event by media outlets, the conversation inevitably shifted back to the sport by the end of it. The country has positioned itself as a cultural powerhouse and has helped improve the image of the Middle East; a part of the world which is been associated with instability and darkness for much of this century. These are no small accomplishments and Qataris have much to be proud of.