After tying with Croatia then beating Belgium, Canada, Spain, and Portugal, Morocco reached the semi-finals stage at the 2022 FIFA World Cup in Qatar.

No one expected them to make it this far. But they did. And they made history.

Morocco’s historic performance brought Muslims together in an unprecedented way. Muslims’ support for the Moroccan team transcended national borders, languages, ethnic backgrounds, and other divisions within the community.

Fatima Zaidouni, who grew up in Morocco then moved to the U.S. for college and graduate school, attended Morocco’s first game against Croatia in Qatar’s Al Bayt Stadium. She said it was an “absolutely amazing experience.”

“Most of the audience was Moroccan,” she said. “It just felt like they were playing in Casablanca or something.” She added that it felt special to see so many Moroccans in a country that is not Morocco.

“You feel like you’re there for the same reason and you love your country and you love your players and you want them to win,” she said. “There’s just this atmosphere of a lot of warmth and love and cheerfulness.”

Zaidouni, who is a PhD student at MIT, organized a 150-person watch party in the Boston area after returning from Qatar. She described it as an “out of body experience,” as she had never felt connected with so many Moroccans since she left Morocco. She said there were “tears and joy and screaming” during and after the penalty kicks in the game against Spain.

She said she didn’t realize how significant this World Cup was going to be for the history of her country and for her personally, and how important it was for Muslim and Arab representation.

Shedding Light on Representation and Western Media Coverage of Muslims

Morocco’s successes triggered conversations around the importance of Muslim representation and how it ties into accurate media coverage.

Nasser Al-Rayess, an Arab-American comedian and content creator living in the Bay Area, said he “felt seen” amidst all the celebrations and positivity on social media in support of the Moroccan team. 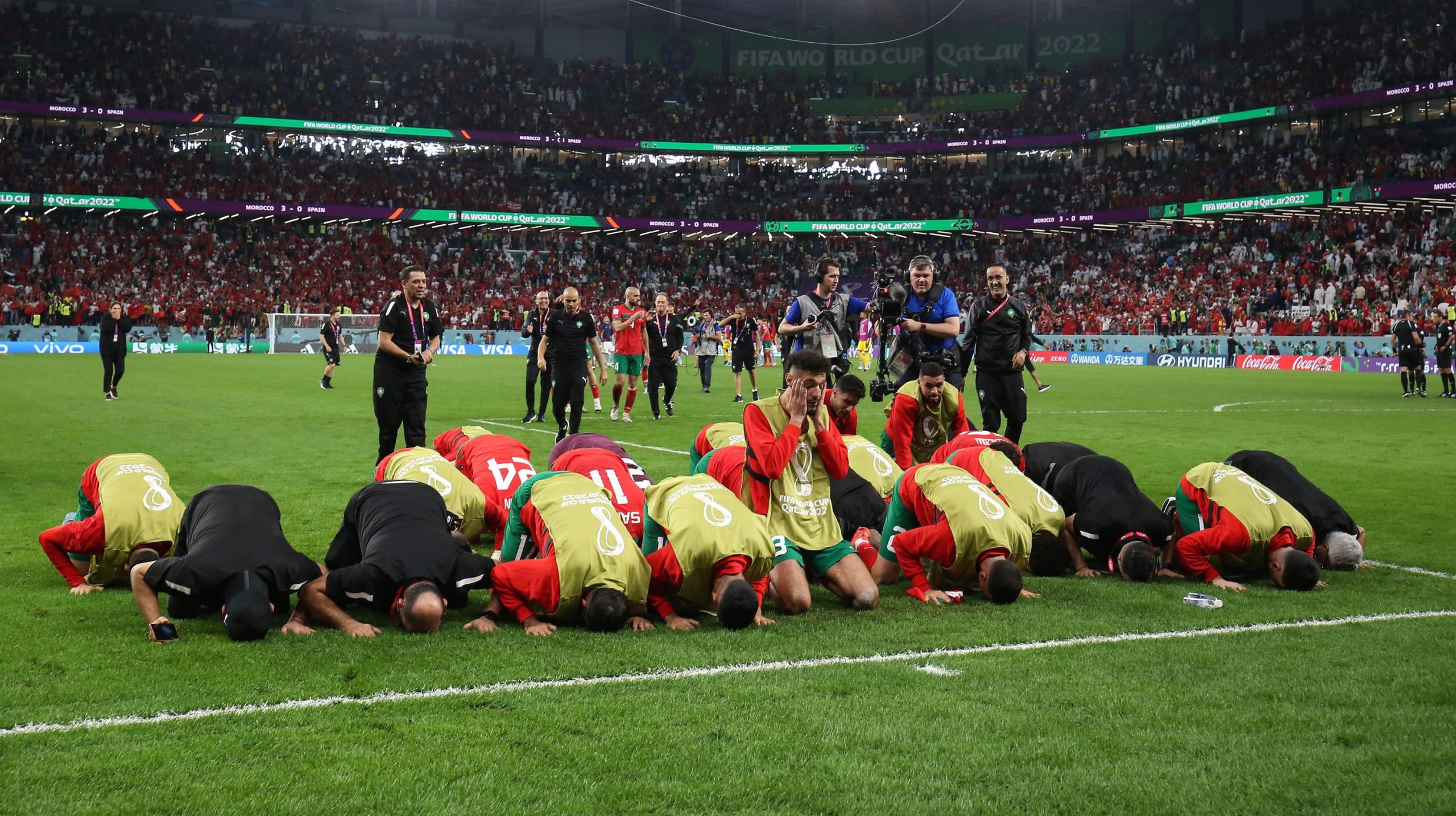 As a Muslim growing up in post-9/11 America, he said it was hard to find positive media coverage of Muslims, and he hopes this moment will help change that for younger generations.

“I think of the younger kids that have trouble embracing their identity. And what that means to see people see their own people celebrated,” he added.

The Moroccan team also collectively went into sujood, or prostration, as means of expressing gratitude to Allah

after every game. Many Muslims said it felt really meaningful to see sujood normalized on international television at a sports event watched by over five billion people.

“People need to be able to see what we do, for it to be more normalized,” he said.

When you see the players “prostrating after a goal or raising the Palestinian flag or going to their moms and you see their moms, they look just like your mom and my mom,” Zaidouni said, “you can’t help but feel very represented.”

Several mainstream media outlets, including ESPN and the New York Times, inaccurately referred to the Moroccan team’s prostration as them “bowing to thank their fans.” Those errors were corrected after a wave of online criticism of the error.

This incident brought attention to the importance of increasing positive representation and accurate portrayal of Muslims and Muslim religious practices in the media. Some argued that even though this coverage was inaccurate and problematic, it was still important because it sparked a conversation and brought greater attention to the importance of informed reporting.

Implications for Discourse on Colonial Histories

But Morocco’s historic performance was not just significant for Muslims in the west – it also resonated in Muslim-majority countries and had implications for discourse on colonial histories.

Deandra Raryarasmi, a foreign affairs professional from Indonesia, said many people in Indonesia supported Morocco, especially after winning against Spain. She said they proved they can get far “with hard work and perseverance and of course blessing from Allah

“It’s not in every World Cup you see a Muslim majority country’s soccer team get that far,” she said. “This bond between fellow believers transcends country borders.”

Raryarasmi also noted that performing sujood is common in Indonesia’s national soccer team, but it was still significant to see on an international level.

Al-Rayess, Zaidouni, and Raryarasmi all agreed Morocco gained such widespread support in part because it was the underdog, and people like underdog stories.

“Soccer fans tend to support European teams,” Raryarasmi said. “With Morocco winning, they proved everyone wrong. They proved that they could do it.”

She also added that Asian and African teams are typically underrepresented in the World Cup, and the discourse around formerly colonized countries winning against their colonizers makes this a “win for countries who used to be colonized everywhere.”

Morocco’s victories sparked conversations not just about underdog stories but also about formerly colonized countries “rising up” against their former colonizers. As Raryarasmi suggested, Morocco proved that formerly colonized countries can “break free of the set path.” This discourse also demonstrated the deeply intertwined relationship between politics, sports, and history.

A Win for Muslims Everywhere

Al-Rayess said many people keep repeating the phrase “representation matters,” and “you don’t truly know why that saying has weight to it until you actually feel it yourself.”

“And seeing what Morocco did, I felt it,” he said.

“It made me really, really happy to see a whole country being cheerful like that, because we don’t always get those things that we are going to be collectively cheerful about,” Zaidouni said. “I wanted it for my people and I felt like we deserved it.”

Taking Ownership Of Your Choices

Nada is an Egyptian-American writer based in New Jersey, with bylines in Business Insider, Times Union, Boston Political Review, and other outlets. She was previously a Research Fellow at the Harvard Kennedy School, where she works on projects on racial discrimination in the criminal legal system. She graduated from Boston University in May 2021 with a B.A. in economics and minors in public policy analysis and computer science. Nada previously worked as a Research Assistant at the Wilson Center in Washington, D.C., where she conducted foreign policy and international affairs research focusing on the Middle East. She has also been a Policy Fellow at the Council on American-Islamic Relations (CAIR) and Policy and Communications Intern at the Abdul Latif Jameel Poverty Action Lab (J-PAL). Nada is a recipient of the Boston University Departmental Prize in Economics, awarded annually to the most distinguished graduating seniors in the Economics Department.