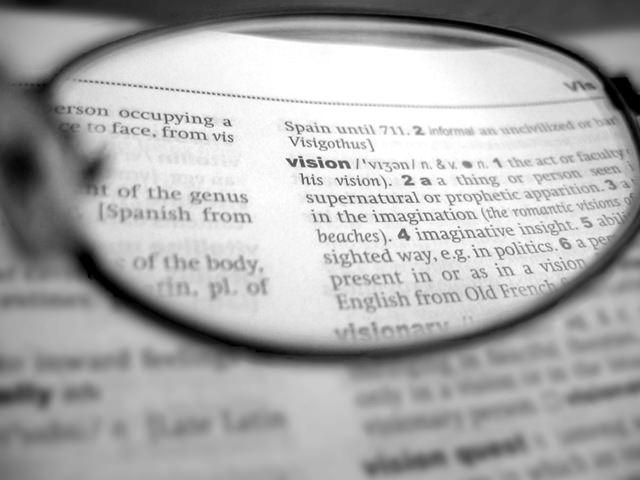 Suleman Ahmer is MM newest specialist. He will be sharing articles on productivity and time management  for our readers. As founder of Timelenders, a productivity and time management consulting firm, Ahmer has taught these skills to thousands of people around the globe from CEOs to students.  He trains people on the Islamic framework of developing long term visions. He is the author of Embattled Innocence, a collection of short stories based on his work as a Muslim relief worker who has traveled to 25 countries to aid Muslims, including Afghanistan, Tajikistan, Bosnia, Azerbaijan and Chechnya.  His articles on geopolitics and history have appeared in prestigious publications in the US such as The Washington Post for Middle East Affairs. He has spoken on these topics at over 40 US universities including the Harvard University, MIT, Emory, the University of Pennsylvania and Rutgers.

A vision gives us the ability to fight adversity. How? This happens basically in two ways. First, a vision gives us motivation. The more powerful the vision is, the more motivated we shall be. The motivational impact of a vision can be summarized as:

I define ‘Nobility’ as the degree, to which your vision touches lives other than yourself for a greater good. In the example of expanding the company, the scale is growing but not the nobility, whereas in the second example of educating children, both the scale and nobility are growing.

Even if scale, nobility and loftiness levels are not high, just having a vision gives us motivation, as opposed to having no clear vision at all. Thus, a motivated person is better able to handle adversity than someone, who is de-motivated or dejected.

For describing the second way, in which a vision helps us fight adversity, let me share with you a simple story. When I was in the eighth grade, a friend drew a line on a piece of paper and asked me to shorten it without erasing it. I was perplexed. After giving thought to it for a few hours, I gave up and told my friend that it cannot be done. To this he responded with a ‘aha’, drew a much longer line next to the previous one and said, “See, it is smaller now!”

Except for a few matters, most of the things in this world are relative. Some people are rich, while others are poor; some are beautiful – others not that much; some are more intelligent, while others less.

Suppose two people set out for a journey in a car. The first one’s destination is five hours away, while for the other it is a ten days journey. After five hours of driving, who do you think will feel more tired? Of course, the one, who has come to the end of the journey. The one, who has ten days of driving ahead of him, will not feel tired; rather, if asked, he would respond by saying, “I have just started.”

Adversities are a fact of life. Let us accept it. All of us will be tested one way or the other. I have noticed an interesting aspect of being a human: whenever we face an adversity, we subconsciously compare it to our visions in life. This process just happens automatically. The greater and more powerful the visions are, the less the adversity appears to us, and the more petty visions we have, the bigger the adversity appears. You will find people, who are pushed to depression or despair, just because they are not able to afford an expensive car or are not able to pay for a vacation trip in the summer.

Close to three decades of imprisonment of Nelson Mandela failed to break his will and spirit. He had a vision—to take his people out of slavery—that far superseded the adversities he had to bear.

I would like to share with you an essay published in Express News, by Mr. Jawed Chaudhary, a columnist in Pakistan, about a young man by the name of Jawad Bhatti. The essay was in Urdu and I am indebted to Ms. Saba Nadeem, one of my students at the Lahore University of Management Sciences (LUMS), for translating it and Ms. Laila Brence for editing it. So here is the true story of Jawad:

“Mohammad Jawad Bhatti is an extraordinary gift, and his story, in my opinion, is more inspiring than the works of such top notch writers as Stephen Hawking and Jeans Dominique Bouby. Jawad is 24 years old. He is an extremely courageous and fearless person. Every Pakistani, who gives in to the petty problems of life, should look at Jawad as an example: in spite of his immense disability, he has never been disappointed in life; instead, he has defeated his physical and mental impairments.

Jawad used to live in Shujabaad, a town 40 km from Multan. He was impaired during his childhood. An illness he underwent around the age of three left him permanently physically impaired – he could not stand upright because of deformed leg bones. For about seven years, he was completely bedridden, after which he decided he wanted to go to school. Inside the house, he could only crawl using his hands to move around, as his father could not afford any treatment. The height of Jawad’s determination can be seen by the fact that although the school was two kilometers from his house, he still decided to pursue his education.

His father dropped Jawad to school on his bicycle, and his friends helped him get to the class. He used to study till evening, when one of his friends would carry him back home on his shoulders. He went to the same school till the eighth grade. In 2002, Jawad transferred to GovernmentHigh School in Shujabaad. The school was three kilometers from his house, but the distance did not discourage Jawad. He kept on going to school, with his father, friends and relatives aiding in his commuting. In 2004, he finished his matriculation examination with 658 marks, which was an immense success, considering his disability.

Jawad wanted to become a doctor. The roots of this desire sprung from his childhood, when he had visited different clinics and observed doctors treating patients. Jawad deduced that being a doctor was a great job. After matriculation, it was nearly impossible to continue his education, because the college was very far, and most of his friends had moved to Multan for continuing their education. Also, Jawad’s parents could not afford to fund his education. However, his friends returned and took him along to Multan for attending the college.

In Multan, Jawad stayed at a hostel and would crawl to his classes. In 2006, he cleared his intermediate exams with 830 marks, which was the first step towards acquiring his dream. He took the entry test at a medical college and conveniently passed. However, the medical board committee refused to take Jawad in, because he could not stand up straight. Although disappointed, Jawad did not lose hope. Soon, a great opportunity came around: a doctor called Jawad to his office and told him that if he would agree to be operated five to six times, he could stand up on his feet. Jawad agreed, went for surgeries and subsequently was bedridden for six months.

After six months, he once again took the medical college entry test, with his legs still plastered. He managed to pass it once again. This time, when he was called upon by the medical committee, they were astonished to see him standing with the help of crutches under both his arms.  Just when it seemed that Jawad Bhatti had finally won the battle against adversity, he was presented with another challenge. Now, the committee seemed to object on the fact that if Jawad was using both of his hands to hold the crutches, he would not be able to examine the patients. In response to this concern, Jawad asked, “What am I supposed to do now?” The committee replied: “If you show that you can walk with only one crutch, we will admit you.”

Jawad, as determined as he was, requested the committee to give him a period of six months. Returning home, he started to practice walking with a stick. Learning to walk with a stick might seem easy to those, who have walked on their feet throughout their lives. However, the intense difficulty of Jawad’s situation can only be understood by a person, who after twenty years of crawling, would have only recently learned to stand with the help of crutches under both arms. What set Jawad apart was the fact that he always took such hurdles as opportunities – he knew that his dreams were just difficult, not impossible.

When after six more months Jawad was once again standing in front of the committee, the members had no option but to accept this promising individual. Finally, Jawad saw his efforts pay off, as he was admitted in AllamaIqbalMedicalCollege.

Currently, Jawad is in the process of becoming Pakistan’s finest doctor. He is in the third year of MBBS, and his education is being funded by “Karavan-e-Ilm Foundation”, a charitable organization, which provides educational resources to the underprivileged individuals in Pakistan.

Jawad Bhatti is the real heir of this crippled Pakistan that I live in today. Through his determination, Jawad is trying to communicate to the disabled leaders of today’s Pakistan that if a person’s resolve is strong enough, he can crawl his way even to the top of Mount Everest. From an economic and political perspective, a crawling country like mine needs such individuals as Jawad Bhatti, who can once again make it stand on its own feet.”

She’s Not Damaged Goods – We Have Damaged Standards

Know Your Soul, Know Yourself