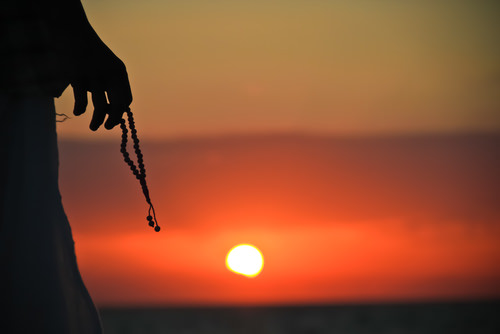 Many passages in the Qurʾān extol the significance of the soul or nafs. In one celebrated passage, it says:

By the soul and Him that formed it, then inspired it with its wickedness and God-fearingness. He is truly successful who purifies it, and he is indeed ruined who corrupts it. [Surah Ash-Shams, 7-10]

The Qur’ān also offers this glad-tiding:

But those who feared the standing before their Lord and curbed their soul’s desires, the Garden is their abode. [Surah An-Nazi’aat, 40-41]

The idea of curbing the soul’s passions and of seeking to purify it is reiterated in the following hadith: ‘There are three acts that, whoever does them will experience the sweetness of faith: one who worships God alone, for there is no true god but Him; one who pays his yearly zakat on his wealth with an agreeable soul – not giving a weak, decrepit nor diseased animal, but giving from his middle wealth, for God does not ask for the best of your wealth and nor orders to give the worst of it; and one who purifies his soul.’ A man inquired: What is purification of the soul (tazkiyat al-nafs)? He replied: ‘To know that God is with him wherever he may be.’1

The Qurʾān describes the human soul (nafs) as possessing three potentials or degrees which are present within it simultaneously.2

The first and the lowest degree is al-nafs al-ammarah bi’l-su’ – “the soul that constantly incites to evil”. The Qurʾān says:

…The soul does indeed incite to evil… [Surah Yusuf, 53]

This untamed, unweaned soul is the abode of a multitude of incessant cravings and passions: be it for wealth, fame, power, physical gratification, exploiting others – that is, anything which deflects one away from God and to the lower possibilities of the human condition. Al-Jurjani (d.816H/1413CE) defined the nafs al-ammarah as: ‘It is that which inclines to the bodily nature, ordering [the pursuit of] physical pleasures and carnal appetites, pulling the heart to debasement. It is the abode of evil, giving birth to all reprehensible traits.’3 So, this nafs, equivalent to the English word “ego”, refers to the reprehensible aspects of our actions and character – actions in respect to our sins of omission or commission; character in terms of pride, envy, vanity, greed, impatience, ostentation, and the like.

As the believer strives to purge his soul of blameworthy traits (radha’il) and labours to replace them by their praiseworthy opposites (fada’il), the nafs al-ammarah is gradually weaned away from heedlessness and disobedience to God, and thus begins to give way to al-nafs al-lawwamah – “the reproachful soul.” The Qurʾān declares:

No! I swear by the reproachful soul. [Surah Al-Qiyamah, 2]

This soul is man’s active conscience that is afflicted with regret, remorse and self-reproach whenever the Divine Will is disobeyed and elements of the lower, evil-inciting soul resurface. Al-Jurjani writes of the nafs al-lawwamah: ‘It is that which is illumined with the light of the heart, according to the measure of how much it has become awakened from habitual heedlessness. As soon as it commits a sin due to its natural oppressive disposition, it takes to blaming itself and repenting from it.’4

After much inward striving and discipline, the nafs al-lawwamah is further purified of any opposition to God’s will or shari‘ah, and is ever receptive to heavenly outpourings. Here the nafs al-mutma’innah – “the soul at peace” or “the tranquil soul” then begins to predominate. It is this soul that is most worthy of divine assistance and acceptance. It is about this that the Qurʾān says:

O tranquil soul! Return to your Lord, pleased and well-pleasing. Enter among My servants. Enter My Paradise. [Surah Al-Fajr, 27-30]

Having established His obedience and internalized it, it is intimate with God, at peace with God’s decree (rida bi’l-qada’), tasting the sweetness of faith. Al-Jurjani defines the nafs al-mutma’innah in the following manner: ‘It is that whose illumination is completed by the heart’s light, such that is has been purged of its blameworthy traits and adorned with praiseworthy ones.’5

In all of this, four factors are crucial and have a significant bearing in purification of the soul: (i) one’s inborn nature; (ii) his upbringing; (iii) spiritual striving (mujahadah) and self-discipline (riyadah) in adulthood; and, of course, (iv) God’s tawfiq or enabling grace.

, said: al-mujahid man jahada nafsahu fi ta‘ati’Llah – ‘The warrior is the one who strives against his lower soul in obedience to God.’6

So let us roll-up our sleeves and let the work begin.

Our Lord! Grant piety to our souls and purify them.

You are the Best of those who purify;

You are their Guardian

A Deeper Look at Emaan