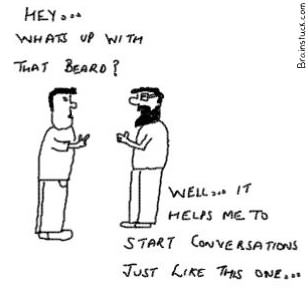 In recent years, a Muslim’s outward appearance has drawn much public scrutiny. This trend is most readily apparent in the banning of ḥijābs/niqābs to varying degrees across Western Europe. More insidiously, it is evident in the not-infrequent hate crimes against Sikhs and Hindus who vaguely resemble Orientalist depictions of what Muslims “should” look like. Similarly stereotypical notions no doubt buoyed Juan Williams’ now infamous comment on “Muslim garb” and continue to hold sway among many Americans and Europeans.

As my time in Egypt has taught me, however, Muslims themselves aren’t immune to pigeonholing others – ESPECIALLY other Muslims – based on looks.

The cultural baggage that comes with having a beard in Egypt, recent headlines notwithstanding, is not a contemporary phenomenon but one many decades in the making.

For one thing, no high ranking public figure in Egypt for more than a century has had anything beyond a neatly trimmed mustache (until, of course, this past week). Over the years, this grooming trait came to represent masculinity itself; one need only watch a random selection of films from Egypt’s golden age of cinema for confirmation. To this day the proportion of mustachioed Egyptian men (particularly over the age of 40) is likely far above the global mean.

There have also been far more nefarious obstacles to the spread of sunnah beards on Egyptian soil. Indeed, it was common practice in many of the country’s top private companies to dismiss bearded job applicants off hand. This “unofficial” policy spanned beyond the industries that immediately come to mind, such as hospitality and tourism, and created a glass ceiling – if not a fully opaque barrier – across much of the for-profit sphere. Since the uprising that toppled Hosni Mubarak, there has been some push back against this discriminatory behavior, but by and large the status quo remains intact.

While private enterprises at least made an effort to conceal their discrimination, public sector institutions openly flaunted their anti-stubble statutes. What’s more, these restrictions applied not only to employees and enlisted men, but many government offices during the Mubarak era even forbade civilians with long beards from entering their premises. Granted, when compared to other countries’ law enforcement and military practices, the internal portion of these policies are pretty much par for the course. Even then, how many of those countries have a contingent within their public service ranks actively flouting such regulations?

All these factors have collectively created a fertile atmosphere for irrational reactions to male facial hair.

Beards tend to solicit highly illogical, sometimes visceral responses on the streets of Egypt. If you’re a young and bearded Cairene, the following scenarios are all too familiar:

1) Shaykh yourself before you wreck yourself

You walk into a smaller size masjid/mussallah and the muezzin gives the iqāmah. You stand in line like normal, but then notice everyone’s eyes looking toward you. There’s a gentle nudge on your back…then another. “Yalla ya shaykh, itfaddal,” a brother next to you insists, giving voice to the collective sentiment in the room. You politely decline – not out of humility, but out of sincere belief that you are surely not the most qualified to lead the prayer. It matters not, for your brothers are starting to get annoyed by your “modesty.” To move past the mounting fitnah – and the increasingly aggressive “gentle” nudges – you play the role of imām.

The summers in North Africa are not for the faint of heart. You have to do what you can to stay cool, which includes wearing weather-appropriate clothing. On a particularly scorching afternoon, I ventured out in my shorts (below the knee), a polo shirt, sandals, a baseball cap and, because I had a lot of errands to run, a backpack. This combination was apparently too much for one observant brother (OB) to bear. He caught up to me on the streets of Cairo and offered some unsolicited advice:

“Akhi, a respectable person shouldn’t dress this way,” the OB said, motioning to my beard and then to my clothes.

“Pardon me?” I replied, perplexed.

The OB went on to quote me the hadith of not resembling the kuffar. I proceeded to discuss the nuances of that hadith. He wasn’t having it.

Irony is not dead.

3) Does this beard make my head look big?

You step into one of the innumerable cabs that plug Cairo’s roadways. If, like me, you’re allergic to cigarette smoke, you politely ask the cab driver to put out his Marlboro. He begrudgingly complies. Upon further investigation of your appearance, he decides to abruptly shift discursive gears: “So do you think growing a beard is mandatory?” A perplexed look is all you can muster. “Do you think I’m doing something haram by not having a beard like you?” Before you can answer that you are simply trying to do your best to follow a sunnah and in no way feel it makes you a better Muslim than someone who is clean shaven, the driver starts rattling off names: “Amr Khaled, Moaz Massud, that guy who does tajwīd on Dream 2…are they all sinning?!?”

Fuel to the Fire

On top of the socio-religious connotations that permeate beard perception in Egypt, recent historic events have added a new layer of politically motivated prejudices.

Fist length beard? Must be Brotherhood. Oh, you shaved off the mustache? You’re totally Salafi. Neatly trimmed all around? Guess you’re one of those Abol Futooh moderate types.

With Egypt in such a dynamic state – both politically and culturally – it’s entirely likely that these facile stereotypes will fall by the wayside or get imbued with more constructive meaning. If, for example, Mohammed Morsi, Egypt’s newly elected and fabulously bearded president, exceeds expectations, male facial hair could become a broadly accepted sign of national pride – something akin to the out-of-nowhere trend across the NBA this past year, or the de facto grooming style on the streets of South Philly.

At any rate, and in the meantime, it’s best to prepare yourself for the inevitable follies that come with flaunting the fruits of your facial follicles on the streets of Cairo.

Gearing Up for Ramadan