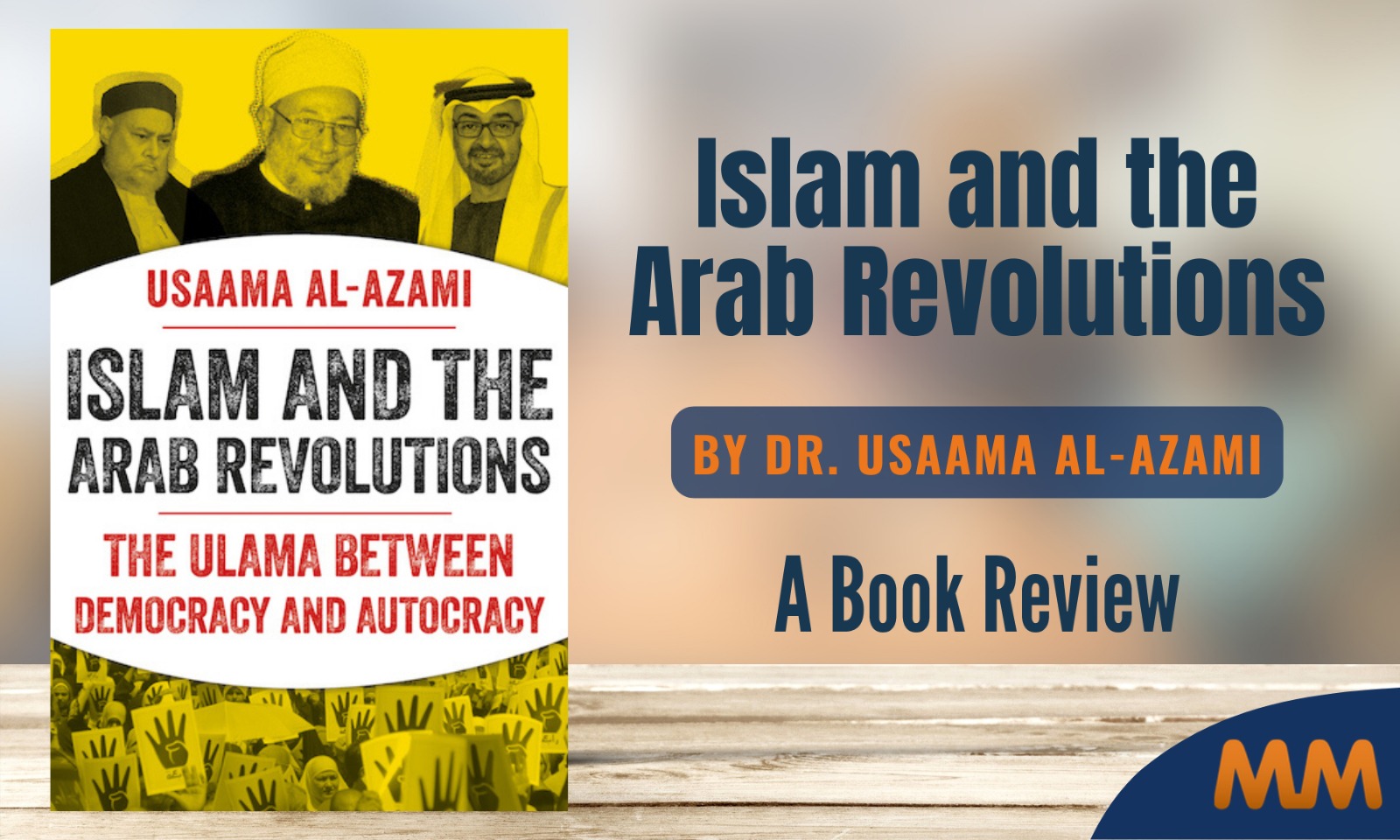 Zainab bint Younus writes a book review of Dr. Usaama al-Azami’s “Islam and the Arab Revolutions: The Ulama Between Democracy and Autocracy,” which examines the role of Arab scholars during the Arab Spring.

Dr. Usaama al-Azami’s “Islam and the Arab Revolutions: The Ulama Between Democracy and Autocracy“ is an impressive work that examines the role of Arab scholars in both, supporting and actively campaigning against the Arab Spring; with particular focus on the Egyptian revolution and, subsequently, the Rabaa massacre of 2013. This book is not merely an academic exercise, but an intense look at the very real ways in which religious discourse is used to justify -or reject- political revolutions and their consequences… such as the massacre of innocents.

Focused primarily on Egypt, the majority of Dr. Al-Azami’s book looks at several prominent scholars and their positions on revolution: Shaykh Yusuf Qaradawi, Ali Gomaa, Ahmad al-Tayyib, Ali al-Jifri, Hamza Yusuf, and Abdullah Bin Bayyah. From the beginning, Dr. Al-Azami is transparent about his own positionality and relationship to these scholars; both personally (as a student of some of them), and from an Islamic academic perspective (as he is trained both in academia and in Islamic studies). His balanced take is admirable, in that he calmly holds himself responsible for presenting his own arguments and stances, without falling into the harsh polemics that many would expect on such a contentious topic and with such controversial figures.

For the uninitiated reader (such as myself), he provides detailed background on each individual, tracing their scholarly training and experience, highlighting their political allegiances, and their overall worldviews.

I particularly appreciated his shedding of light on figures such as the oft-adored Ali Jifri, whose father is a Yemeni politician with Saudi citizenship. Dr. Al-Azami politely says, “It is possible that the younger Jifri’s political heritage had a bearing on his political orientation… Ali al-Fifri would consistently make religious arguments in the post-Arab revolutionary public sphere that were in the interest of the UAE-Saudi counter-revolutionary, anti-democratic alliance and hostile the Qatari-Islamist pro-revolutionary alliance of the period.” [pg. 84]

For the less polite amongst us, it is obvious that Ali Jifri is little more than yet another political stooge whose popularity amongst the masses -especially given his position as one of the most famous “neo-Traditionalist” scholars- is blatantly used to promote tyrannical Arab regimes on one hand, even as he spews fluffy spiritual wisdoms on the other.

Dr. Usaama deftly identifies and deconstructs Jifri’s hostility towards Shaykh Yusuf al-Qaradawi, specifically with regards to the issue of supporting revolutions within the Arab world. He spends a significant amount of time detailing Shaykh Qaradawi’s own position in support of democracy, his fatawah in support of protests, and his perspectives on the various Arab revolutions. It is clear that Dr. Usaama is sympathetic to Qaradawi, but he is also careful to identify and recognize Qaradawi’s own political positionality vis-a-vis the state of Qatar. Even so, any reader would feel inclined towards favoring Shaykh Qaradawi, after what we go on to read about the anti-revolutionary scholars and their roles in the Arab Spring.

The author carefully examines others, such as Ahmad al-Tayyib -the current Shaykh al-Azhar-, as he was during the Arab Spring in Egypt. One could expect nothing more from him than predictably parroting the Mubarak government’s demands. Of course, with equally laughable predictability, once Mubarak was ousted, he quickly played the game of political expediency and made a point of making himself (and by extension, the institution of al-Azhar) seem as though he supported the revolutionaries all along. “The post-revolutionary Tayyib… bore little resemblance to the Mubarak-era ‘alim who had expressed confidence in a dictator’s ability to rule…” [pg. 76]

In a far more respectful a manner that I could ever conceive, Dr. Usaama brings forth receipts to highlight Ali Gomaa’s position during the Egyptian revolution and counter-revolution: blatant support of Hosni Mubarak and Abdel-Fattah Sissi, explicit criticism of the protestors -and indeed, manipulation of religious texts (and use of invented texts!) to demonize them as khawaarij-, and finally, sickening justification (and indeed, encouragement) of the Rabaa massacre. Dr. Usaama cites television appearances, public speeches, interviews, and a particularly horrific private recording for Egyptian security forces that told them it was their religious duty to murder anti-Sissi protestors in Rabaa.

Dr. Usaama doesn’t stop there: he pulls out all his (rhetorical literary) guns and examines Hamza Yusuf and Abdullah Bin Bayyah as well, highlighting their own complicity in supporting tyrannical Arab regimes (in particular, the monarchies paying their bills and in other words, the rulers of the UAE). Given Hamza Yusuf and Bin Bayyah’s political positions with respect to the UAE, one should not be particularly surprised at their positions (God forbid they lose the significant political influence they hold, let alone the financial perks that they undoubtedly enjoy).

My disgust was particularly piqued by Hamza Yusuf’s praise of Ali Gomaa as an “honorable and pious man,” his laughable statement that “Egypt had ‘the freest press in the Muslim world’” (thankfully fact-checked immediately by Dr. Usaama), and his bizarre belief that “kings are incorruptible” [pg. 103] and that monarchs should hold unlimited power.

As if that weren’t enough, Yusuf believes that people should simply accept, and indeed embrace, political powerlessness and humiliation for some kind of spiritual benefit. In his words: “Most of the Muslim world is now experiencing a state of powerlessness, and therein lies a great opportunity…. It may be the end of political Islam, but it surely portends the resurgence of spiritual Islam.” [pg. 105]

While I’m sure many adoring fans of Hamza Yusuf will scramble to make excuses, or even deny all of the above, the evidence is unrelenting; and Dr. Usaama provides it all in scrupulous detail. He manages to do all this without once referring to them as corrupt scholars for dollars, scumbags, or any more colorful terminology (which is admirable, because I had some very unsavory words for these people). Dr. Usaama goes on to provide further analysis of the major figures’ arguments for and against the revolutions and counter-revolutions. He has a full chapter on both “Azharis Opposed to the Coup and Counter Revolutions” and “The Reactions of Anti-Coup Ulama to the Rabaa Massacre.” Both of these chapters were illuminating.

Autocracy, Quietism, and the Legitimation of Usurpers

However, the most valuable part of the book -to me- was his segment on the uniqueness of modern-day Islamic discourse on political revolution vs traditional historical perspectives. He examines, with academic rigor, the concepts of authoritarianism and quietism in pre-modern Sunnism; highlighting particular nuances in the discussion that I would never have even considered (which isn’t saying much, considering I’m a complete non-expert and non-academic). In particular, there is a very thoughtful look at how classical scholars dealt with the issue of “legitimation of usurpers,” and how there was a greater concern for the overall well-being of societal functioning – which, in the past, was less impacted by the change of hands of state power. Dr. Usaama includes a fascinating subsection titled “On Sufism, al-Ghazzali, and tyranny” [pgs. 229-231], dismantling the idea that al-Ghazzali would have ever supported the types of tyrannical regimes that exist today in the Muslim world.

To be honest, I read this book as a non-academic, non-expert layperson with a passing interest and vague background knowledge of the entire topic. As someone who is most definitely not the target audience, it was a compelling read, tying together politics, religion, academic analysis; most importantly, it recognizes the difference between genuine spiritual morality vs the use of religious leaders to textually legitimize political violence. Those with far more knowledge will undoubtedly have greater valuable insights on this book, and produce significantly better commentary. Readers may also be interested in his video podcast with Ismail Royer here and here.
For myself, I can only aspire to be as unfailingly polite while completely smacking down distasteful individuals who continue to be propped up uncritically by their adoring fans in the name of “traditional Islam.”

Rethinking Work-Life Balance Through The Lens Of Amaanah

A Ramadan Without Community, And Isolation The Whole Year Round