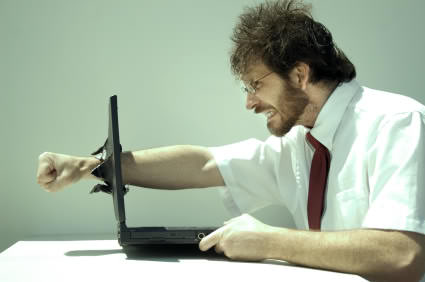 Times were much simpler a couple of decades ago, weren’t they? Back when you’d collect hundreds of those free AOL trial CDs and pop them in, listen to the ear-grating internet dial tone for half an hour, and then wait eons for a simple website to load while making sincere du‘ā’ that your family members don’t pick up the phone. Back then the internet was something new and exciting- Muslims had yet to discover its near endless virtual pastures, and as such, we actually had a lot more time to ourselves. 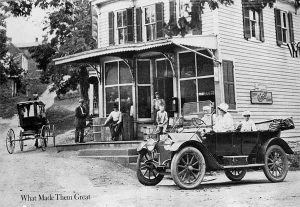 What kids nowadays think Muslim life was like before the internet existed.

Yes kids, its true! Life for Muslims somehow miraculously existed before Al Gore “invented” the internet. We had to painstakingly look stuff up in things called “books” and get our daily news from archaic scriptures known as “newspapers.” Oh and the debate over whether music was permissible or not? Trust me, you’d declare music a crime against the Ummah too if you ever saw someone walking around wearing this laughable ancient device:

If you actually know what this is, then you’re old.

With the advent of the internet, you and I can now summon thousands of links and resources to a near bottomless trove of sites in a matter of seconds, and then share that information with hundreds of others in just a few minutes. Communication between us is lightning fast, and people can reach one another in ways that we didn’t even think was possible a decade ago.

But the age-old rule still stands true- that wherever there are Muslims hanging around, there are bound to be Muslims arguing over ridiculous things. Not surprisingly, the internet is now the boxing ring for our new generation of Shaykh Googles and Mufti Wikipedias to profess their scholarly expertise and argue with one another with far more advanced tools of divisiveness, or as they say nowadays according to modern cyber tajwīd: “trolling.” 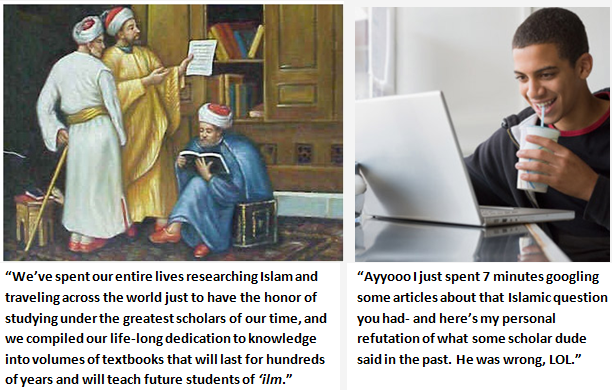 You don’t have to look far to find young internet scholars debating over beard lengths, or berating “less practicing” or “less educated” brothers and sisters over eating nacho cheese Doritos or watching TV shows, or even finding Muslims spending hours viciously arguing back and forth over trivial things.

It’s a shame that such incredible tools of spreading knowledge and building enlightening discussions such as Islamic Forums, Message Boards, group E-mail threads, Twitter feeds, and YouTube comment threads instead descend into embarrassing hotbeds of heated fights and countless hours of wasted time. And of all these online mediums, the biggest culprit of all is Facebook.

So how does it all go down, you ask? Surprisingly, it’s quite predictable: 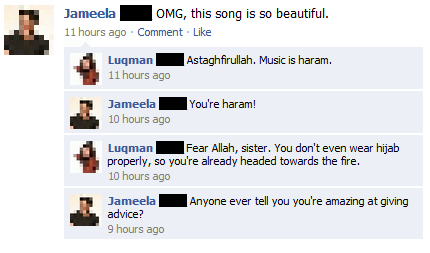 You know you’ve seen that. And you know it doesn’t end well. But boy, is it entertaining to watch.

Most Facebook arguments usually begin over something innocuous, like posting up a status about your favorite food and having the conversation continue until someone unknowingly posts something about eating pop-tarts, and out comes a fiery Muslim with a quick mouse-click trigger prowling the internet looking for a good opportunity to stroke the mighty beard of morality. 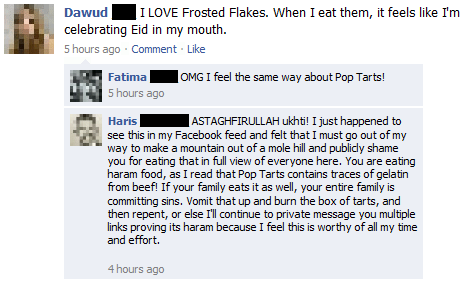 But who are the characters behind these arguments? Haha, that’s a great question, and I’m glad I asked it of myself. Take out a pen and notepad, my friends, and keep a sharp eye out for these tell-tale signs of a good old Muslim verbal tussle: 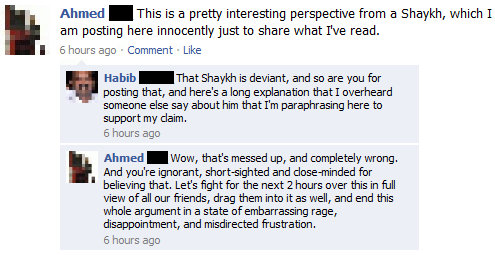 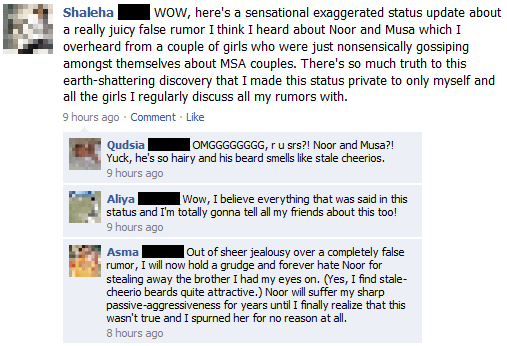 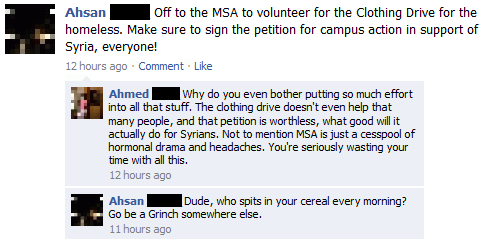 THAT ONE JUDGMENTAL GUY 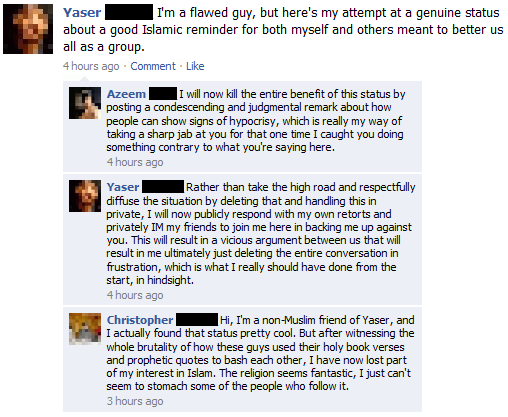 Spotting trouble online early on and avoiding it, diffusing it, or negating it is only part of the solution, but it doesn’t completely solve the disease we have as judgmental, gossipy, and argumentative folk. Espousing proper Islamic manners of disagreement, etiquette of mutual respect and understanding, and patience with those we don’t see eye to eye with is a prophetic legacy that applies even to our online lives, just as much as it does to our dealings in person.

The internet may have completely revolutionized the way we interact with one another, but it certainly didn’t change the way we’re taught to conduct ourselves as Muslims. And above all else, it’s always best to ask yourself if the hours you spend arguing with other people online is truly worth giving up your house in the wondrous Eternal Gardens of our Lord.