Friday, January 14th will remain as a historic day for Tunisia. A day oppressed Tunisians were only dreaming about, a day when the unthinkable happened. After 23 years of a iron-fisted rule on the country, the president Zine Al-Abidine Ben Ali left the country and his power behind him. 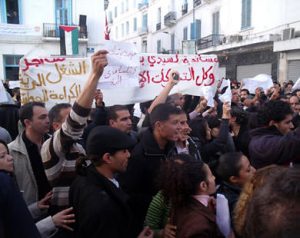 It all started on December 19, 2010 in Sidi Bouzid, a city 150 miles south of the capital Tunis, where the police opened fire on civilians protesting against unemployment. A week earlier, Mohammed Bouazizi, an unemployed young graduate set himself on fire and later died. He was protesting against the confiscation by the authorities of fruit and vegetables that he was selling in the street without a license. Since then, several thousand Tunisians have decided that it was time to show how angry they are about unemployment, corruption, lack of freedom and rising prices of food and fuel. After violent marches all over the country, the protests finally reached Tunis where an emergency curfew was put in place. In few days, security forces killed between 20 and 50 people and as a result, the government sacked the interior minister and said it would investigate allegations police used excessive force. U.N. High Commissioner for Human Rights Navi Pillay said the deaths were “a result of some excessive measures used, such as snipers (and) the indiscriminate killing of peaceful protesters.” Despite the promise to not to seek a sixth term in office 2014, thousands of people continued to take the streets of Tunis to demand the immediate resignation of the president. Ben Ali, the once mighty president had to face the reality that he couldn’t regain control of the country and decided to flee. Recent reports attest that he found refuge in Saudi Arabia after France refused to welcome its once former protégé on its own soil.

Some analysts have described the speed and the success of the uprising as a result of a tacit agreement amongst different spheres of the society, from the opposition groups, the Islamists to the Communists, as well as by the labour unions, that it was time to turn the page on this brutal regime. They were the instrumental forces who helped spread the protests to all major parts of the country, including the influential north.

Few weeks before the first incident, the Guardian released a classified cable obtained by Wikileaks where the American ambassador explained what the problem in Tunisia seems to be: “President Ben Ali is aging, his regime is sclerotic and there is no clear successor. Many Tunisians are frustrated by the lack of political freedom and angered by First Family corruption, high unemployment and regional inequities.” The cables show how Ben Ali’s family entourage is seen as a “quasi Mafia” because of its “organized corruption.” As an example, they quote the example of the hated president’s wife, Leila Ben Ali who was given a parcel of land for free. The land was developed, a school was built by the state, and later sold to private investors, reaping nothing but pure profit for Laila Ben Ali. The son-in-law of the president bought a 17% stake in a bank prior to its privatization and sold his share later pocketing a generous profit. Another son-in-law expropriated land from the state to build a mansion, officially for the benefit of a state water company.

Despite all these widely known facts, Western democracies have turned a blind eye and shown little or no interest at all to help the oppressed population. On the contrary, they have portrayed the police state regime as a model to be followed, where liberties were evolving and as true ally in fight against terrorism (understand against Islamists).

When Habib Bourguiba took power in 1957 after gaining independence from France, the president followed the steps of Ataturk in Turkey and tried as hard as he could to secularize the country. He reformed the laws and education system and incorporated Western principles wherever it was possible. He went as far as banning the headscarf for women. As John Esposito, a professor of International Affairs and Islamic Studies at Georgetown University puts it: “For Bourguiba, Islam represented the past; the west was Tunisia’s only hope for a modern future.”

His successor, Ben Ali, who took over from Bourguiba after a coup d’état in 1987, continued the policy of secularism so dear to Western nations. The Tunisian government restricted the wearing of headscarves (hijab) in government offices and discouraged women from wearing them on public streets and public gatherings, and decried hijab as a “garment of foreign origin having a partisan connotation.” There also frequent reports that police sometimes harassed or detained men with beards whom the government suspected because of their “Islamic” appearance and sometimes compelled them to shave off their beards. In 2006, the Tunisian president declared that he would “fight” the hijab, which he referred to as “ethnic clothing.”

Now that the dictator has been ousted, people are excited and hopeful for better times. I still remember a very popular Tunisian imam in France who once told me with tears in his eyes that he hasn’t seen his mother for more than 20 years. He will frequently call her but could not go back because of the fear of being arrested and tortured, just like so many others who have disappeared and who have paid a heavy price for just being Muslim or seeking justice. The Prophet (sal Allahu ‘alaihi wa sallam) said: “Be afraid of the curse of an oppressed person as there is no screen between his invocation and Allah.” (reported by Bukhari) Let’s pray that Tunisia will now find a just ruler who will take the country towards an enlightened era of peace, freedom and justice.

Part I | Tunisia, the Undoing of a Dictatorship?