October 30, 2010 was to be a day like any other, a day with no known cultural, historical or religious significance.  But thanks to the comedic minds behind the Daily Show and the Colbert report, it would be a day when hundreds of thousands of people would gather on the National Mall to unite as Americans who are tired of being represented by those whose voices shout out hatred, bigotry and racism in one form or another.  Although the true cause may have been misunderstood by some as a political rally, the Rally to Restore Sanity and/or Fear was successful in showing that many more of us Americans long for civility and cordial discourse than those who choose to hate and fear-monger. 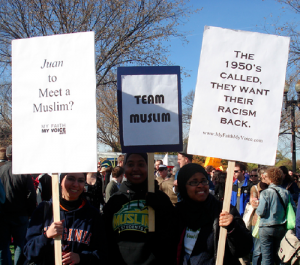 The day started out as my brother, friend and I arrived at the Greenbelt station a little before 10:00 am to find a string of people that stretched to the middle of the large parking lot, all waiting in line for the metro.  Thankfully, my brother investigated and discovered that the line was only to buy tickets and we bypassed having to wait in line for the next train.  After a small delay, we were on our way to the National Mall to restore some sanity (and/or fear).

Throughout our train ride and as we walked towards the rally location, there was a general feeling of friendliness and unity. People of all demographics had come, bringing along family and friends from near and far, booking hotels and plane tickets, sacrificing sleep and packing themselves like sardines into modes of public transportation, all to support the cause of the rally and be a part of history in the making.  Some brought chairs and snacks for comfort and held signs to state their own opinions or just to provide some humor.

As I waited for the program to start, I initiated a tea party of my own by offering my fellow rally goers (as per my sign) tea, cookies and pleasant conversation.  My intention was to have a REAL tea party.  Some accepted the tea, others the cookies and some pleasant conversation.  As the timer counted down towards the beginning of the program, people stood, excited for the event that they had planned, waited, and traveled for, to begin.

In order to see the stage happenings, depending on one’s height, one had to stretch one’s neck and/or stand one one’s tiptoe to view one of several giant screens placed around in several locations.  People’s heads, signs and distance were some hinderances towards getting a proper view.  But, those who watched the rally from the comfort of their own home (who could see and hear everything) would most likely attest that it was not about the program itself but about being there.  Indeed, there was a feeling that being there was being a part of something special.

Having no real interest in it, I sat through the entire beginning of the event, which consisted of musical guests whom I did not know.  After the musical entertainment, the hosts of Mythbusters came to experiment on the audience.  Those of us in the back could not hear as well, but still followed the cues as best we could.  Many requests were sent by waves of people chanting “louder, louder” for the hosts to speak a bit louder, but to no avail.

Finally, after the national anthem was sung (and quite beautifully I must say), Jon Stewart joined the stage to commence the comedic portion.  The Daily Show news team and Stephen Colbert added to the humor, each playing their own role in the planned program.  The guest appearance by Yusuf Islam, who sang “Peace Train,” was met with excitement by many.  Refusing to “get on that train,” Stephen Colbert interrupted Yusuf Islam’s message of peace with the conductor of another “train” – the “Crazy Train” sung by Ozzy Osbourne.  The played out tug-of-war between the two masterminds of the Rally, Jon Stewart and Stephen Colbert, as to which train would lead ended with a mutual agreement on the “Love Train”.

The“tug-of-war” between restoring sanity and keeping fear alive continued throughout the rally as Jon and Stephen came up with reasons why each should prevail. In the end, Colbert’s fear mongering was thwarted and Stewart “won”.  In a moment of sincerity, Jon Stewart offered words of wisdom of how we, as Americans (not as Democrats, Republicans, Tea Partiers, etc), can and DO work together every day despite our different political views.  His point was to show that if we can put these differences aside in our day to day life, then surely we can do so to revolve the problems afflicting America.

If you haven’t seen the rally’s program, I would highly recommend watching at least the latter half in which Stewart and Colbert “duke out” why each of them is right.  At one point, Stephen is convinced that not all Muslims are evil when Jon brings out Kareem Abdul Jabbar.  Likewise, robots’ names are cleared when R2D2 comes on the stage.  The satire and tongue-in-cheek performances were not only funny, but also helped lighten up serious topics that have been filling the media in recent times.

After the rally, everyone went back to their lives as usual.  People headed home, went out to eat together or continue touring the district. The Metro was so overwhelmed with rally goers that they stopped charging thoroughfare.  The excitement continued as pictures were posted, Facebook and Twitter statuses were updated and stories were shared.  But, as they say, what comes up must come down.  Mentioning of the rally still occurs until today, but not to the extent it did in the few days that followed.  Certainly, those of us who went were happy to show that we supported rationalism…and our lives must go on.  My hope is that with each day, all the rally goers (and those who could not make it), work to make the world a little saner, hopefully without having to carry around big signs.

Should American Muslims Work Through The American Political Process To Try To Change American Foreign Policy Towards The Muslim World?