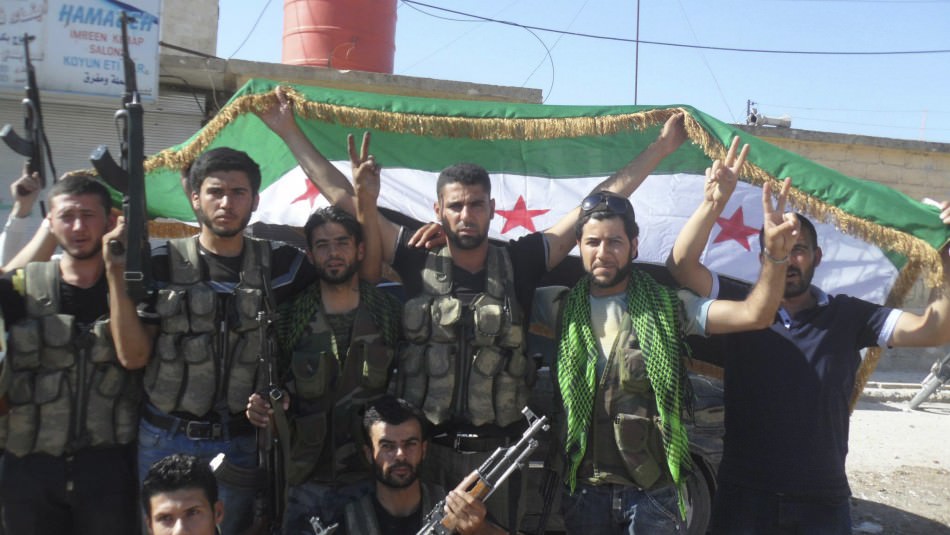 By now you have probably already heard of the harem of Tunisian sex-warrior slaves heading to Syria in order to give up their young bodies to the appetites of deprived rebels to fulfill jihad al-Nikkah — “Sexual Jihad” — and are coming back to the country with bellies full of Jihadi babies. Unfortunately for what seems to be that blind spot people have when it comes to stories on Muslims and sex, there doesn’t seem to be any evidence of Tunisian female warriors going to fight a holy sex war.

Despite the lack of clear evidence of a sex war pandemic, this hasn’t stopped news media outlets all over the world from grabbing, expanding, and running with this story.

In December, Lebanese news channel Al Jadeed reported that hardline and popular Salafi scholar Shaykh Mohamad Al Arefe, a loud and inciting opponent of the Syrian regime, had issued a fatwa (a non-binding religious opinion) allowing the gang rape of non-Sunni Syrian women by rebels. Not only did the scholar vehemently deny expressing any such opinion, on Twitter and in later sermons (both links in Arabic), but the story was debunked by the Electronic Intifada’s Ali Abunimah.

On March 27, 2012, the Pan-Arab news site Al Hayat, published a piece discussing the apparent crisis of young Tunisian girls and what was being referred to as “Sexual Jihad.” It claimed that the impetus behind this was another fatwa from Al Arefe, in which he urged young women to go in engage in the so-called sexual Jihad by offering themselves to the rebels. There was, however, no proof of this fatwa and those close to Al Arefe also thoroughly denied the cleric had ever made such a ridiculous statement.

According to the report, 13 young Tunisian girls had gone missing, believed to be in Syria engaging in the sexual Jihad. The story gained traction in Arabic social media circles when in a video, parents of one of the girls claimed that their 17-year old daughter, who had since returned home, had been brainwashed by friends with Salafi Jihadi leanings who told her to go to Syria to temporarily marry and have sex with rebels. Iranian news station Al-Alam also released a video claiming to be interviewing one such girl (Arabic).

While Tunisia’s Minister of Religious Affairs Noureddine El-Khadimi condemned such religious opinions, there seemed to be no actual evidence of anyone — Al Arefe or any other scholar— issuing such a decree.

Sexual Jihad, however, didn’t go viral until last week when AFP and Al Arabiya were amongst the first to report that that in an address to the National Assembly last Thursday, Tunisian Interior Minister Lotfi ben Jouddou mentioned how young Tunisian women were being lured into a sexual Jihad in Syria, having sex with “20, 30, 100” rebels and were returning to Tunisia pregnant.

The story, like any story involving Muslims and sexy time, quickly caught on fire in the American press. The Atlantic (“Tunisian Teens Are Helping Out Syrian Rebels with ‘Sexual Jihad’”), TIME(“Tunisian Women Go On ‘Sex Jihad’ to Syria, Minister Says”), Business Insider (“Tunisian Girls are Coming Home Pregnant After Performing ‘Sexual Jihad’ in Syria”), The Global Post(“Tunisian Women on ‘Sexual Jihad’ Return Home Pregnant’: Minister”), Jezebel (“Tunisian Minister Warns of Women Going to Syria on ‘Sex Jihad’”), Huffington Post (“‘Sexual Jihad’ in Syria Cause Rise in Pregnancy among Tunisian Women”) and The Daily Beast (“Syria’s ‘Sex Jihad’”) are amongst just few of the names of the media outlets that covered the story with great zeal and over-played images that would make the late great Edward Said convulse from horror and despair in his grave.

Despite the story having gained traction of the viral variety, and despite the concerns and facts expressed by Tunisian officials, there seems to be actually very little evidence to suggest that the so-called sexual Jihad is actually a thing (and Jihad al-Nikkah is not a thing in Islamic jurisprudence).

The story of Tunisian women returning from waging sex on holy warriors (thanks RT) in Syria impregnated with future warrior babies itself is, at best, just incredibly questionable and many, from the onset of the story’s break into the English press, expressed deep skepticism. In a civil war that has had many ideological fronts, the most pernicious in is salience has perhaps been that of information. Syria has been a cluster of misinformation, misattribution and propaganda. O’Bagygate and Mint Press-gate are two of the most recent headlines to highlight the problems in not only reporting on the conflict but also how easily questionable, untrue, unverified information is gobbled up to serve ideological biases and wishful thinking.

Lauren Wolfe, director of Women Under Siege, emphasized in an email exchange that WUS, while unable to investigate on the ground, had looked into the rumors of a ‘Sexual Jihad’ sporadically over the past year and found “no hard proof of anything.”

“We’ve seen all kinds of horrors in this war though, so who’s to say whether this is happening too. Then again, we’ve also seen massive amounts of propaganda tainting both sides in this conflict. So who’s to say this isn’t more of that?”

Ruth Michaelson, a freelance reporter who spent time in Syria in September 2012 and has written extensively about the role of sexual exploitation in the conflict, not only expressed concern, in an email, over the veracity and strangeness of the story, but also the several long-standing racist Orientalist tropes being pulled together into the story:

“The first thought that struck me on this is that now that Western media has exhausted the vein of “female refugees being…exploitatively married to men from the Gulf”-type stories, this is the new wave. It seems like there has to be a story in the Western media that plays into the dynamic of sexually rampant Arab men and submissive women, and this is the 2.0 version.

As with the 1.0 version it’s not to say that there is not a problem. In the case of sexual exploitation of women in refugee camps, there are definitely problems happening, but the framing of the issues in the media made it sound like a pandemic of uncontrollable sexual violence. This was actively unhelpful- it made the…occurring problems more difficult to locate and discuss sensitively [and] it also was framed in the media in a way that directly disenfranchised and silenced Syrian women, portraying them as unending numbers of mute and stupid victims of sexually voracious men… “

The sex Jihad story playfully weaves together a history of fatwa misreporting (like the famousfaux phallic fatwa), haphazard research and knee-jerk reactions (the Queendom of Saudi Arabia debacle, the Yemeni child bride hoax and the guy too handsome for, again, Saudi Arabia) and a weird, uneasy obsession with Muslims and sex. It especially feeds on the trope of Muslim women’s bodies as disposable for the unquenchable appetites of Muslim men. This in turn also obscures the agency of Muslim women in sexual relations — as ones to only ever serve males.

“Why would women coming into Syria prioritise sexual favours when there is a large body of evidence showing that there are female fighters on the ground?”

So what then can we make of the Interior Minister’s statements? Dismissing them is not an option, yet questioning them certainly is as ultimately we don’t have enough details about the story from the source itself, Ben Jeddou, whose information more than likely came from within the intelligence service in his ministry and not (hopefully) from online gossip sites. How did these young girls, some allegedly as young as thirteen, get out of Tunisia, into Syria, out of Syria (pregnant) and back into Tunisia with what seems to be ease? Why are only Tunisian women being sent to wage this sex war? Why not Pakistani? Chechen? Libyan? Who is escorting these women? Or are they traveling alone and if so how and where are they getting across the borders into Syria?

What we do know is that, according to the Tunisian government, at least thirteen Tunisian girls are missing, several hundred Tunisian men have allegedly gone to join Syrian rebels, several thousand have been stopped from going to Syria and we know that sex (especially in terms of sexual violence and exploitation) is an inseparable part of any conflict and war. Yet the near exclusiveness of only Tunisian young girls being groomed for a holy sex war brigade (perhaps unwittingly building on the stereotype of North African women amongst Gulf/Levantine Arabs), the lack of evidence and corroborating reports from journalists, aid workers and activists on the ground in Syria, false fatwas and the history of delegitimizing groups, ideas and movements through accusations (whether these are true or not is irrelevant) of ‘sexual deviance’ (i.e. Here, here and here) call into question how this story is being used by the Tunisian government itself. After all, it has a strong interest in countering the growth of Salafist ideas and sympathies within its own borders.

When it comes to stories that involve Muslims and sex, international news media are quick to publish and gloat about the varying ways in which Muslims (by extension generally any and all brown folks) are so incredibly sexually repressed that they resort to sexual deviance, which is always at the expense of their women. The words sex and Jihad are two SEO-happy terms that elicit strong emotional responses and outrage as well as clicks and news-makers are well aware of this. Instead of putting in some time to verify information or, at the very least, offer cautionary language most, if not all, American news media reported the sexual Jihad story as the hard (no pun intended), cold, exploitative truth. As I’ve written elsewhere:

“Predisposed ideas and conceptions of Muslims and of gender relations in the Muslim world and Muslim countries make it easy for sloppy and reactionary journalism to gain momentum. They love to publish it, and we love to read it. There’s something wrong with this equation, but we still continue to gobble it up every time it’s thrown in our collectively gawking face.”