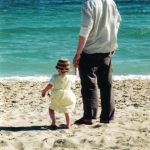 Amongst the many family dynamics issues that the Muslim community is beginning to address, one of the least-discussed subjects remains that of father-daughter relationships.

In the Muslim community especially, this is an issue which has been overlooked, ignored, and generally treated with a sense of discomfort. Particularly amongst immigrant families, the relationship between a father and his daughter(s) is often a distant one; girls are encouraged to spend the majority of their time with their mothers and other womenfolk.

A girl might be “Daddy’s Little Princess” as a baby, a toddler, a child, but as she grows closer to puberty she will often find herself left at home instead of taken to the masjid, attention deflected from her and turned towards her brothers instead (if she has any).
Unfortunately, this is a practice which has extremely negative repercussions… for the fathers, the daughters, and indeed the Ummah at large.

Psychologists refer to father-daughter relationships as having an importance too often overlooked, despite the incredible impact that it has on both parties. Indeed, much of the time the effect of this relationship isn’t even noticed until much later in life, when patterns have already been set and are unlikely to change.

The role of a father in his daughter’s life is pivotal: he is the first man in her life; the one who teaches her what he, a male, thinks of her, a female; and thus shapes her sense of self-worth in the eyes of other men; the one whose behaviour and mannerisms will influence her mental image of “the perfect man” and her choice of life partner (i.e. husband).

In Islam as well as in psychology, the father is meant to be the daughter’s guardian, protecting her from harm, teaching her life skills and strong values. Yet despite all this, far too many fathers play a distant, secondary role in their daughter’s lives. There is a misconception that a father is merely the breadwinner, the supporter of the household, that his role is primarily that of financial provider rather than nurturer. After all, isn’t it the mother’s job to raise the children? Isn’t it the mother’s job to teach her daughters what it is to be a girl, a woman?

Yes, it is – but the mother is not a child’s only parent. She is equally the man’s progeny. His genes are present in her DNA, his flesh and blood are hers. When she looks at him, he is seeing a part of himself; in her behaviour is a reflection of his own attitude and mannerisms.
How then can any father willingly minimize his role in his daughter’s life?

The greatest, most perfect example of father-daughter relationships can be found in the history of Islam. Has there ever been a father more devoted, a daughter more adoring, than our beloved Messenger (sallallaahu ‘alayhi wa sallam) and Sayyidah Faatimah az-Zahraa’ (radhiAllahu anha)?

We all know the stories:

Young Faatimah, scarcely ten years old, wiping filth off of her father’s back and furiously berating the leaders of Quraysh for their behaviour.

Faatimah, who used to weep at the sight of dust that was thrown upon her father’s head, and would be comforted with the words “Do not cry, my daughter, for Allah shall protect your father!”

Faatimah, the apple of her father’s eye, of whom he said: “Whoever pleased Fatimah has indeed pleased God and whoever has caused her to be angry has indeed angered God. Fatimah is a part of me. Whatever pleases her pleases me and whatever angers her angers me.” (Narrated by al-Bukhaari, 3437; Muslim, 4483)

Noble Faatimah, one of the four greatest women in the world: “The best women in all the world are four: the Virgin Mary, Aasiyaa the wife of Pharoah, Khadijah Mother of the Believers, and Fatimah, daughter of Muhammad.”

Faatimah, of whom A’isha (radhiAllahu anha) commented, “I have not seen any one of God’s creation resemble the Messenger of God more in speech, conversation and manner of sitting than Fatimah, may God be pleased with her. When the Prophet saw her approaching, he would welcome her, stand up and kiss her, take her by the hand and sit her down in the place where he was sitting.”

The entire Muslim Ummah has benefited directly from this unique father-daughter relationship. How many lessons have been derived from the Seerah, from incidents pertaining to this father and to this daughter?! How much knowledge, how much wisdom, was transmitted from father to daughter, and from that daughter to her own sons, al-Hassan and al-Hussein (radhiAllahu anhum)?! Yaa subhanAllah! How can we ever belittle, neglect, forget the importance of such a bond?

O Muslim fathers, will you follow in the footsteps of the Messenger of Allah (sallallaahu ‘alayi wa sallam)? Will you do what you can to help your daughter become the Faatimah az-Zahraa’ of today?

Or will you keep ignoring her, neglecting her, passing her off to ‘womanly influences’? And in the process, compromise, minimize, and even destroy the potential of someone who could become the next Maryam, Aasiyah, Khadijah, or Faatimah?

O Muslim men… be men! Be fathers. Be fathers of the greatest Muslim women this Ummah has ever known!