Before I go on, let’s pray for the sister’s akhira, her 2 children (4 and 6) stripped of their mother [source]. May Allah grant patience to her family and all those who have become the indirect victims of this crime. Ameen. 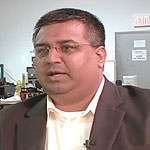 Update: Muzzammil’s ex-wife’s cousin, Zerqa Abid tells us more about Muzzammil’s past, who was married twice before, and had changed his name to Mo Steve Hassan.  Far from being a Muslim “honor-killing”, this brutal beheading seems more of a man with a violent past, who eventually couldn’t control the demons inside him.

We heard the news yesterday that the Bridges TV Founder, Muzzammil Hassan, has been arrested on charges of beheading his wife, Aasiya Z. Hassan. A story elsewhere from a less reliable source (this website has axe to grind so I am not sourcing it) mentions that Hassan “admitted that he murdered his wife earlier in the afternoon”. So, until more facts are released, the crime is only alleged, and Hassan is innocent until proven guilty. We do know that he “came to the police station at 6:20 p.m. [Thursday] and told us [the police] that she [his wife] was dead”, at which point he was arrested. Thus, it does not take a rocket-science to make a reasonable connection at this point.

So, our intention was to ignore the story initially, because it really had nothing to do with Islam per say. Rather, this was a case of an alleged domestic violence of the most horrific form. According to the CDC, 32 million Americans are victims of serious domestic violence. In 2000, 1,247 women and 440 men were killed by an intimate partner [source: American Bar Association Commission on Domestic Violence]. More information on domestic violence can be found here. 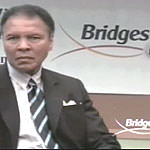 However, the fact that Muzzammil was a founder of a Muslim network, the the goal of which was “connecting people through understanding”, and improving the image of Islam [see this story from Nov 2006 around the time of the founding of the network], then as the editor of “Moderate Voice-MV” blog states:

The post on the MV blog also links to many Islamophobic vultures (the right-wing neocons and associates) who are having a field-day around the blogosphere at the expense of this dead mother of 2 children, violently killed by her husband (allegedly). These people have no shame: to give pause for some time, to consider the victim, to give her family some respite, rather they are wasting no time in abusing this horrible event for their own ulterior purposes. But we couldn’t expect any less from them.

The response to these bigots is actually quite simple. If indeed, such decapitations were “normal”, “run-of-the-mill” things that Muslim men do to their wives, then when is the last time you heard of it? At least, I don’t remember another Muslim man involved in killing his wife this way. But I think most of us do remember the throat-slitting by the American football hero, don’t we?  Was Christianity responsible for that? Or his race? Neither. Only he was responsible for it. And if M. Hassan was indeed culpable for the brutal murder of his wife, then only M. Hassan is responsible for it, and we hope that he gets the punishment and justice he deserves for it.

I do understand that the Islamophobic vultures are not willing to look at the clear evidences against their angle of the story, because their only goal is to malign our great religion. So, all we can do is to present the facts to the people who are neither here nor there, such that they are not confused by the lies. In this light, we are retreading the post on domestic violence by Sr. Asma Hanif:

Peace is the absence of violence. In order to make peace with others, one must first have peace within themselves.

Domestic violence is an affliction disruptive to the peaceful co-existence of husband and wife. Such disruptive states infringe not only on the immediate family, but also the Islamic family community at large.

Domestic violence does exist within the Muslim community. One may consider this existence an imperfection within a perfect way of life, or a paradox in which imperfect humans behave imperfectly. However it is viewed, it’s presence cannot be denied.