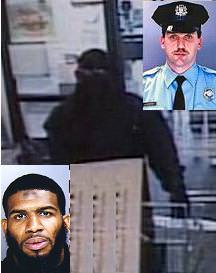 More updates: I have adjusted the post a bit to give credit where credit’s due, and because it is being wrongly perceived by some.

Important Update via Tariq (a message from Philly mayor Mike Nutter– he deserves our props for this, you can send a thank you on his MySpace account):

As you know, a Philadelphia Police Officer has been shot in the line of duty. It has been widely reported that the assailants were wearing “muslim garb” as a disguise during the attack.

I want to make it clear that I do not think that this crime was an act of violence directed from or against the Muslim community. The assailants merely chose Muslim-like dress as a way to alter their appearances.

I hope the Muslim community, and all other communities across Philadelphia, can work together as we deal with this horrible act of violence. This City needs every one of all faiths, races, and ethnicities to come together in peace. I am calling on the religious community to recognize tomorrow as a day of peace and to pray for Sergeant Liczbinski and his family..

This story is not new anymore. I have been hearing about it on NPR for the whole week. Tariq talked about it here. Fortunately, NPR hasn’t made it a point to tell us about the “Muslim connection” in the story. I don’t doubt that other news stations are making the point. Two of the thugs, at least one of whom was a Muslim, dressed up in jilbaabs, abaya, niqaab, gloves— the whole 9-yards, and used this sacred Muslim ensemble to rob a bank, and later killed a police officer, Sgt. Stephen Liczbinski. Sgt. Liczbinski’s funeral is today in Philadelphia. A young Sgt. Liczbinski (age 40) leaves behind a wife and three children, as well as an extended family of nine siblings.

The story sickens me. It sickens me for all the sisters that have to go through such great pains in order to dress up in a way that they believe pleases Allah. This is not a question about the fiqh of niqaab. Those who wear it are not doing it to make a statement. They are doing it to please Allah, in what they believe is the correct Sunnah. And regardless of our views on niqaab, we have to be fully supportive of their RIGHT to wear what they feel pleases Allah. And I am going off in this tangent to preempt any comments that delve into this fiqhi issue. The actions of these individuals puts all our niqaabi sisters in a perilous situation. We cannot blame the average Joe on the street about being jumpy when he sees one or more of these niqaabi sisters entering shops or malls. We can only blame these thugs for the harm they have and will cause.

I remember before coming to this part of America (just over 2 years ago), a BAM (black American Muslim) brother who said he “fled” from Philadelphia, warned me to make sure that if I go to some of the masajids in Philadelphia, I should ensure that my pants were above my ankles. The lack of an overflowing beard, or any for that matter, would be also a source of great consternation for me, he warned. Then he told me about some of the reasons he fled. He could not take the cultish mentality of some of the brothers there. While the brothers and sisters were so concerned about their pants, beards, thowbs, niqaabs, gloves, the same brothers would be involved in all sorts of crimes, both against the society and against their own families (we all know of the marriage-musical-chairs). Another brother told me of a story where a Muslim brother at an ATM had a gun pointed at his head from behind. When the robber-to-be took the wallet, he noticed that the guy he was robbing was a Muslim. “Assalamaalaikum brother, here’s your wallet back”. It was not ok to rob a Muslim, but it was perfectly ok to rob someone who wasn’t!

So, when I arrived in Philly, I went to the Germantown Masjid. Fortunately, I did not face the severity of condascending looks that I was warned against. Interestingly, the Imam was giving a talk (who I knew for a long, long time because we had invited him to Houston several times), and it was still the same 10-year old talk. Perhaps the lack of dirty looks directed at me, was related to what I had been told by some of my friends that things were “cooling down”, and becoming better: that the leadership of the Germantown Masjid is working on changing things as Tariq talks about in this post. Credit where credit’s due.

I am not going to make conclusions as to how practicing the Muslim robber(s) were. I don’t know enough. The overflowing beard of the person in this picture doesn’t mean much. If you knew Philly, you’d know that having long beards and having pants above the ankles is a fad that is copied by many people, Muslims and non-Muslims alike. I found this out when I couldn’t understand how so many “brothers” hung out with half-naked women on the streets, until I was told that this was more fashion than religion. I did notice the “sajda sign” on the person’s forehead, but again I am not going to jump to any conclusions about his “piety”. All I know is that these guy are thugs, who have shamed not only their own families, but the entire Muslim community for their actions.

The Germantown Masjid refused to do janazah prayer for the dead thug. I don’t have the knowledge to pass judgement on this, but a comment on Tariq’s post refers to this hadith:

Abu Dawud narrates that the Prophet ordered that Ma’iz be stoned for adultery. He did not pray over him, yet he did not prohibit anyone else from doing so.

If there is indeed precedent and permissibility of such a refusal, then I fully support the Masjid’s decision. The state of Islamophobia is such that a burial by a Masjid would have totally sent the wrong message. Even if the Masjid admin had put all sorts of disclaimers, the news of a cop-killer getting “Muslim burial” would have usurped any denials of support or disclaimers. Furthermore, I hope that such an action will send the message to other community members that criminals will not be tolerated in the Masjid. This is another sign walhamdulilah, that things are moving in the right direction in Germantown.

I would like to add that the problem with this cultish mentality that continues to exist in many quarters of America, especially the Northeast, is that Islam is restricted to a few superficial things: your appearance and the basics of Tawheed. I am not saying that these masajids haven’t taken brothers out of crimes and drugs, but they haven’t done as well as Imam Siraj’s masjid for instance in New York. Furthermore, no sense of community or fraternity with the non-Muslims around them has been inculcated in the hearts of these Muslims. The mantra of a “dream hijrah” continues to make them non-productive members of their communities, and we all know that the hijrah isn’t happening. And this hijrah-mentality does push back on any desire for “community building” and influencing culture change around them. Sister Umm Zaid has said a lot of things that I wanted to say. Please note that this isn’t BAM-bashing or salafi-bashing. In fact, many who are raising awareness about this cultish mentality include both BAMs and salafis. It isn’t the manhaj or the race that is the problem. It is a case of horribly misplaced priorities.

In conclusion, I hope that the Germantown masjid and other masjids would continue to rethink their positions, and take their communities in the positive direction, as I am told they are heading in. I hope other Masjids who are still holding to the “old ways” will consider the consequences of isolation from the wider community. I hope they will start educating their attendees, including but beyond Tawheed. I hope they will be able to discern between integration and assimilation: the former is a need, the latter is undesirable. May Allah help our brothers and sisters. Ameen.

P.S. After a reminder from a brother, I must add that many years ago, I and many others were afflicted by the cultish aspects I mentioned, and it took a lot of time to wean off them. So, I do recognize that this is not easy and what helped me was the presence of good students of knowledge like Sh. Waleed especially, whose wisdom helped remove me from the myopia that the cultish mentality inculcates. So, my purpose is not to be condescending here. May Allah forgive me.