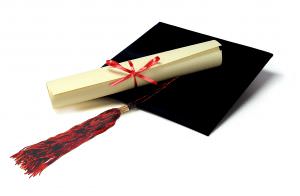 It’s that time of the year again – sunshine, spring fever, allergies and oh yes, the hype of graduation for high school seniors! Few students can deny dreaming of the moment that they’ll walk across the stage in their graduation gowns and caps, ready to receive their diploma to the applause and pride of their family and friends. (Parents look forward to it too, although not so much when they get a whiff of how much tickets cost!) However, graduation also means something else – presents and parties! And we all know what the biggest party of all is… the (for Muslims) dreaded P-word. Prom.

Non-Muslims tend to get even more excited about prom than their grad ceremony… girls are picking out dresses, dates, and flowers while boys try to work out the nerve to ask out so-and-so to the dance. The whole school is buzzing with juicy gossip, posters plastered all over the place, and the hype is dizzying. And our young Muslim brothers and sisters? They watch from afar, sometimes contemptuously or pitying or even totally uncaringly, but many times with twinges of envy and guilt as they wish they had something that exciting to look forward to.

I’ve heard suggestions that Muslims have their own alterna-proms: segregated 100% halaal events where young Muslim grads can have the “grad night party experience” for themselves. In fact, I think several masaajid and Islamic centres already organize such events. However, I was wondering – why the need to have our own version of something that’s based on haraam-ness from beginning to end? Why are we so eager to imitate the kuffaar in something which even many of them dread (horror stories of wet grads and date rapes abound every year)? Are we that caught up in the culture, without the confidence to be proudly and Islamically non-conformist?

Umar ibn al-Khattab said: “Have you forgotten that we were a lowly people and it was Islam that made us honourable? If we seek honour from anything other than Islam, Allah will return us to that state of lowliness.”

Okay, I’ll calm down for a minute – I can see where they’re coming from. Muslim kids who’ve spent their whole lives in the West are growing up in an environment where we – and our Deen – are a minority. It’s inevitable that we’d want to be a bit more like everyone else, that we could take part in the what the majority experiences as part of life. Yet it is just as inevitable that those who take their Islam seriously, those whose identity as Muslims is more important to them than their desire to fit in and be part of the crowd, will always be left on the outside of “mainstream society” looking in. Sure, it sucks being lonely and it’s part of human nature to want to fit in, but on the other hand, no one’s asking you to become a hermit and live in a tiny little shack on a mountain somewhere. Plus, there’s the ultimate reward of never being lonely again and sharing the companionship of the Prophets (‘alaihimus-salaam) in Jannah!

The fact that we’re trying so hard to lose the mark of alienation in favour of total acceptance and integration and imitation of the non-Muslims in everything that they do highlights the need for us to be more aware of the concept of “strangeness” and to take pride in it. While much emphasis is placed on Muslim parents working hard to make their kids feel more “accepted” and “included” in non-Muslim society, what about the importance of raising Muslim youth to be strong enough in their emaan and identity that they don’t feel the need to be accepted and included in absolutely everything? I personally find it sad that we’re so swept up in not being looked at askance that we have lost our pride in our Islam, our confidence in our Deen, and our individuality. It seems that we too have become victims of the culture of conformity.

I’m not saying that we should isolate ourselves and turn into a cult or something ridiculous like that. Rather, I’m emphasizing the need for balance between functioning properly in society as a full citizen/ member of said society and remembering that we should be living in this world as travellers striving for the best and most permanent of Abodes. Difficult as it may be even for adults, we have to understand this from a young age in order to cope with the many situations we’ll face throughout our lives in this society… with an awareness that it is Allah’s Pleasure that matters, not our own.

So whether it’s Halloween, Christmas, birthdays, or grad season, we – adults and youth alike – need to be strong enough to realize that we don’t need to make a “halaal” carbon copy of whatever it is so that we can be “just like everyone else” – because we’re not like everyone else. We are Muslims!

May Allah grant us the strength of emaan and the confidence to practice our Deen to the fullest without apology or envy of those who seem to be having more fun than us, and make us amongst the ghurabaa’ who recieved glad tidings of Jannah, ameen!

Lest Ye Be Judged: Musings on the Raid on FLDS Compound in Texas -Ruth Nasrullah