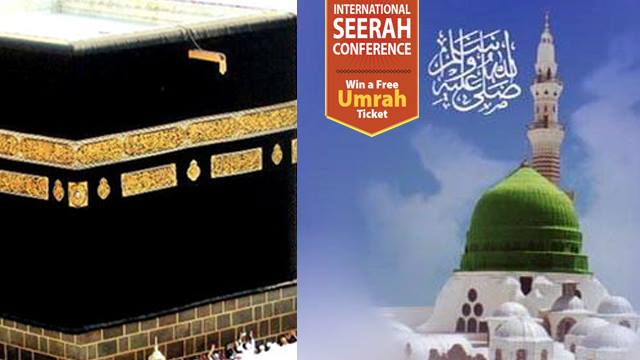 What do you call people protesting an anti-Terror conference? Yes, you read that right. An entire conference dedicated to condemning extremism, terror, and hate in the name of Islam, hosted by Muslims, was graced by protestors who claimed to be conducting a #freespeechrally. To break it down these people are against those who are against terrorism. Would that make them pro-Terror?

That would make sense considering some of the scary signage and chanting that were seen in various locations all over Texas this past weekend, in protest of SoundVision’s “Stand with the Prophet Against Terror and Hate” Seerah Conference that took place in Dallas and Houston. The conference featured Imam Siraj Wahhaj, Prof. John Esposito, and Imam Abdul Malik Mujahid.

In an official statement, Imam Mujahid, president of Sound Vision, expressed disappointment about planned protests of the conference.

“We are disappointed that a rally aimed at standing with Prophet Muhammad against hate and terror is being opposed. Some designated hatemongers, such as Pamela Geller, are terrorizing a family event through their protests. We have been threatened physically and verbally, and have beefed up security for our event because of this. Who, now, is doing the terrorizing?

We also ask who is the enemy of free speech? How ironic that those who accuse Muslims of opposing free speech have placed hundreds of calls and pressured Garland’s Curtis Culwell Center to cancel our event. How can you claim to be in favor of free speech and deny that very right to those you disagree with?

We invite all protesters to visit our website, www.SoundVision.com, to discover that we stand for Islam, we fight for America, and we preach freedom and democracy. This is why the U.S. State Department is supporting our work and our voice. Our aim has, and continues to be, sharing our faith through education, discussion, and debate.” 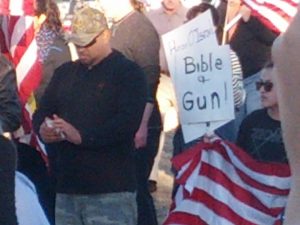 Local news channels gave a decent amount of coverage to the event, and multiple attendees told the same story. On the one side were the #freespeechrally protestors, headed by Pamela Geller, a professional anti-Muslim bigot, blaring threats and profanities into their bullhorns. On the other side were the #OneLove ralliers, protesting the other protest. Confused yet?

According to some accounts, several of the #freespeechrally protestors were armed, and they were intentionally making threats and throwing insults. Some of the more memorable signs read, “Quran is hate speech,” “I’m the infidel your imam warned you about,” “Bible and Gun,” “Go home and take Obama with you,” and much more profane words were screamed out during the event.

An organizer of the #OneLove counter rally, Huma Yasin, who is a lawyer in the Dallas area had these comments, “Never in my life have I experienced that level of hate in such close proximity, real, palpable vitriolic hatred. In life, things are rarely 100% pure, but if there was ever a pure contrast, Saturday was the moment – one side exemplified bitter hatred and the other love and compassion.”

She described one of the most moving scenes of the protest – when the Muslims amongst the counter-protestors congregated for Asr prayer, the #freespeechrally participants revved up their motorcycles and circled the worshipers, trying to drown out the sounds of the prayer. Unfortunately for them, there were many supporters of other faiths who had come to show solidarity with the Muslims, and they formed a physical barrier to protect the worshipers as they prayed. 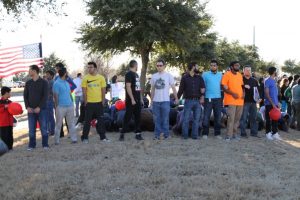 Muslims and non-Muslims forming a human barricade to protect those praying.

Yasin said, “When my brothers and sisters gathered for congregational prayers, they knew it would be too much of a security threat for them to pray together, so they had to break the congregation into two sessions. Each session formed a human chain protecting those prostrating themselves in love and humility to their Lord. All around motorcyclists came and revved their engines so that the people praying would be disturbed, using megaphones to heckle those who were affirming their love of God and, through God, their love for humanity. While this was happening, I had my heart in my throat… I kept thinking, my kids… my kids are watching this. Is this really the world they’re growing up in? But then, I thought you know what? Yeah, they are watching this. And we talk about stories of the Prophet all the time, including when he

was being abused and verbally accosted and our focus is always on how he responded. This was their opportunity to LIVE the Seerah. They know the Prophet

experientially now. They understand how difficult it is to fight hate with love.”

Children and adults alike, in various parts of Dallas and Houston, got to see the face of bigotry first hand (yes, it is 2015), ironically, on the weekend before this country celebrated the life and work of Martin Luther King Jr. Despite or, perhaps, because of the extra media attention, the SoundVision conference was a success. However, these events make it painfully clear that anti-Muslim bigotry has hit a new and unprecedented high.

Even as millions of normal peace-loving Muslims the world over are exasperated at having to condemn and make excuses for all the crazies out there, the anti-Muslim bigots seem to be multiplying and demanding censures, apologies, and mass deportation of the millions of Muslim citizens of this country. As almost all of the Muslims at this event, and across the country, point out – we are home. We are as American as the rest of you, and when you ‘rally’ for free speech you do realize that very same amendment of the Bill of Rights also grants freedom of religion don’t you? According to our founding fathers, they go hand in hand. So don’t raise your voice in ‘free speech’ (even vile speech spewed in hate) if you can’t stand by the rest of that amendment. 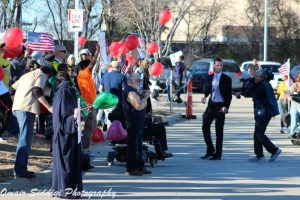 This ultimately leads to the question – what do we as Muslims do about all the hate? Is it even our problem? (Yes) Is it now normal for Muslims to find protestors screaming obscenities at them outside their mosques and conferences? The answer is actually not complicated at all. In Dallas, lovers of peace and co-existence, Muslims and non-Muslims alike, handed out flowers, water, and red balloons to the protestors who were screaming obscenities and threatening physical violence. Why? Simple enough. That is what Prophet Muhammad

An old woman  and a neighbor of the Prophet Muhammad

made a habit of throwing trash in his way whenever he passed by her house, trying her best to irritate him. One day, when he walked out of his home there was no garbage. This made the Prophet inquire about the old woman and he came to know that she was sick. The Prophet went to visit her and offer any assistance she might need. The old woman was extremely humbled and at the same time ashamed of her actions in light of the concern that the Prophet showed her. By seeing the example of compassion of Prophet Muhammad

, she became convinced that Islam must be a true religion.

Farnaz Mawla was born in Chicago, IL but spent several of her formative years in Saudi Arabia. Her family returned to Houston, TX during the first Gulf War. She attended University of Houston where she completed a BA in Journalism and a BS in Biology. She then went on to complete a Masters in Hospital Administration/MBA combination. Throughout her educational career she was an avid writer and editor at various school/college newspapers and newsletters. She now lives in Dallas, TX with her husband and three kids.