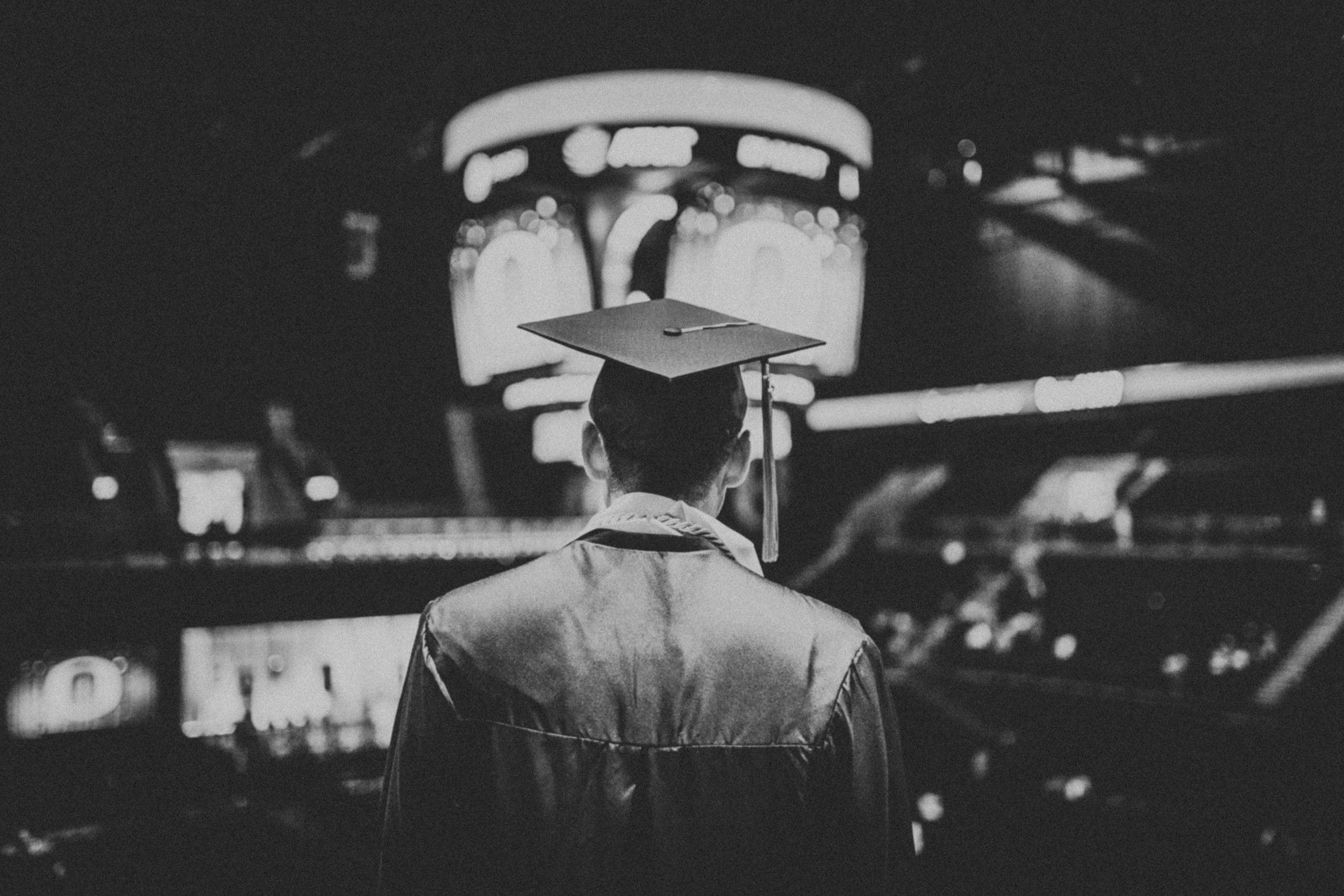 College students are very familiar with various standards, benchmarks, and metrics for success. In order for them to succeed they have to put in hard work, be disciplined, and also have good time management, note-taking, self-study, and test-taking skills.

A student is considered to be successful if they get good grades, maintain a respectable GPA, are involved in extra-curricular activities, get a good job before or right after graduating, or get into some sort of graduate program. They have to have done well on their GRE, LSAT, MCAT, and whatever test there is out there for getting into various programs of higher learning.

However, sometimes students get so caught up in all of this that they end up measuring their own self-worth through these same standards and metrics. Students also become so focused on achieving success in college that they sometimes become careless, negligent, or totally heedless of higher responsibilities; i.e. their soul and relationship with Allah ﷻ. As conscious believers it is very important for us to recognize that our standards and metrics for self-worth and success are actually very different from societal expectations.

The word al-fawz and words that share the same root letters and meanings -such as the verb fāza, yafūzu and fā’izūn- are repeated in several places throughout the Quran. Every single human being wants to achieve success in whatever they do; be it in school, work, family, sports, and life in general. If you were to ask some random person on the street anywhere in the world if they want to be successful, the answer will be an unequivocal yes.

Now the real question is, what exactly is success? How can it be defined? What does it mean to be successful in life? These are fundamental questions each and every one of us is confronted with in life. Most people adopt society’s definition of success – more specifically the definition that is propagated by the media and mainstream culture. According to the society and culture we live in, success is the opposite of failure. It’s defined as achieving and accomplishing one’s aims and objectives, which are overwhelmingly material. Being successful means the achievement of desired visions and planned goals. The dictionary defines success as attaining wealth, prosperity, and fame.

According to our society and culture, a person is successful when they make a lot of money and are famous. It’s as simple as that. If a person has a lot of money, a luxury car, a big house, designer clothes, all the latest products, and a well-paying job, they’re considered successful. Even within the Muslim community, the benchmark for success is rooted in the material. We consider an individual -even our own children- successful if they have a college degree, work as professionals, earn a six-figure income, and live in the suburbs. Within the desi community, one has to become a doctor, lawyer, or engineer to be considered successful. IT is okay as well. Anything else is considered less or sub-par. That’s why today we consider anyone who’s rich and famous to be successful, whether they’re artists, actors, singers or sports figures.

But the reality is that none of these things, no material possession, object or progress, is a true means to success. As a matter of fact, if that’s what we have set as our standard for success, then we’re setting ourselves up for disappointment and failure. True success, real success, lies in faith in Allah ﷻ and performing righteous deeds. Having strong, firm unshakable belief in Allah ﷻ that expresses itself through our words and actions.

There’s a beautiful passage near the end of Sūrah al-Ṣaff where Allah ﷻ describes what success truly is. Allah ﷻ starts by saying,

“O you who believe, shall I tell you about a trade (a transaction/deal) that saves you from a painful punishment?” [Sūrah al-Ṣaff: 61;10]

Allah ﷻ starts this versing by addressing the people of faith directly, “O you who have believed!” O you who believe in Allah

, His Messenger, and the Last Day. Ibn ʿAbbās

would say that whenever we come across this verse in the Quran we should be paying very close attention and listening attentively. Either Allah ﷻ is going to command us with something beneficial, or prevent us from something harmful.

Allah ﷻ then poses a question, “Shall I direct you towards a trade/transaction/deal that will save you from a painful punishment?” This is a rhetorical question. The answer that all of us would give is obviously yes. The language Allah ﷻ uses is very interesting. He ﷻ uses the word “tijārah”, which we can translate as trade/transaction/deal. Trade, transactions, and deals are something that all of us understand and are interested in. We understand the concepts of buying and selling, exchanging, profit and loss. We may not be good at it, but that’s a different story. Allah ﷻ is speaking to us in language and terms that we understand.

Then He ﷻ tells us what this profitable trade or transaction is,

“Have faith in God and His Messenger and struggle for His cause with your possessions and your persons––that is better for you, if only you knew-” [Sūrah al-Ṣaff: 61;11]

This profitable trade or transaction consists of three things: 1) to believe in Allah

, 2) to believe in His Messenger, and 3) to struggle for His cause with our wealth and lives.

The first part of this deal is to truly believe in Allah ﷻ. That means to have absolute 100% firm conviction in His existence, oneness, might, power, glory, and magnificence. To recognize and accept that He alone is the Creator of the heavens and the earth and every single thing they contain. To recognize and accept that He alone is the One who gives life, the One who gives death, the One who provides, the One who sustains, the All-Hearing, the All-Seeing, the All-Knowing, the All-Wise, the Almighty, the All-Powerful. To realize and internalize that everything that happens in this world happens according to His divine decree, will, command, and wisdom. Belief in Allah

means recognizing that He is absolutely unique; nothing is this universe resembles Him in any way shape or form. And because of all this, He alone deserves to be worshiped. It is this belief in Allah ﷻ that leads us towards taqwā, righteousness, good character, patience, humility, and generosity. In simpler words, to truly believe in Allah

is the last and final messenger sent for the guidance of mankind until the end of times. It includes having faith in all that he came with, obeying him in all that he ordered or forbade. It means having this deep, unshakeable love and attachment to the Messenger of Allah ﷺ. The Prophet ﷺ said, “None of you truly believes until I am more beloved to them then their father, son, and all of mankind.”1Muslim, k. al-īmān, b. wujūb maḥabbah rasūlillah…, 44 It also means to take him as one’s role model in every single aspect of one’s life, reading and learning about him, and trying to follow his example in everything a person does. In simpler words, truly believing in the Prophet ﷺ by trying our best to follow his footsteps in every single aspect of our lives.

The third part of this deal or transaction is struggling and striving in the path of Allah ﷻ with our wealth and ourselves. We need to be willing to sacrifice our wealth, resources, time, and health for righteous causes.

Allah ﷻ then tells us what the profit is for making this investment.

“And He will forgive your sins, admit you into Gardens graced with flowing streams, into pleasant dwellings in the Gardens of Eternity. That is the greatest success.” [Sūrah al-Ṣaff: 61;12]

Success has nothing to do with fame, popularity, and money. Success is directly related to our faith, and that is what Allah ﷻ wants us to realize and internalize. This is a very deep and profound concept. The Prophet ﷺ reminded us, “True wealth is not having a lot of material possessions, but true wealth is wealth of the soul.”2Muslim, k. al-zakāh, b. laysa al-ghinā ʿan kathrah al-ʿarḍ, 1051 Meaning, true wealth is contentment, being pleased and happy – which is rooted in faith.

The Prophet ﷺ changed the perspective of his companions; i.e the way they viewed the material world. Their society and culture also viewed material wealth as a sign of success an honor. But the Prophet ﷺ taught them that ultimate success comes from one’s relationship with Allah ﷻ.

Now this doesn’t mean that we can’t pursue worldly success as well. We should focus on our faith and relationship with Allah ﷻ while simultaneously going through our college careers with excellence. We should make sure we are disciplined, attend lectures, take excellent notes, study hard, try to get the best grades, apply to the best graduate programs out there, and pursue good careers. But this should not be done at the expense of our soul and relationship with Allah ﷻ. There has to be balance and moderation.

I would argue that the balance should tip in favor of our souls and relationship with our Creator.

– Principles of Success from Surah Al-Mu’minoon

Principles of Success from Surah Al-Mu’minoon

– Parenting Older Kids: Focusing On Success In The Deen

Parenting Older Kids: Focusing On Success In The Deen

Using A Third-Party Messenger: You’ve Found “The One” In Your MSA [Part 3]

A VIP Ticket To Jannah In 10 Steps: Lessons From Surah Al-Furqan