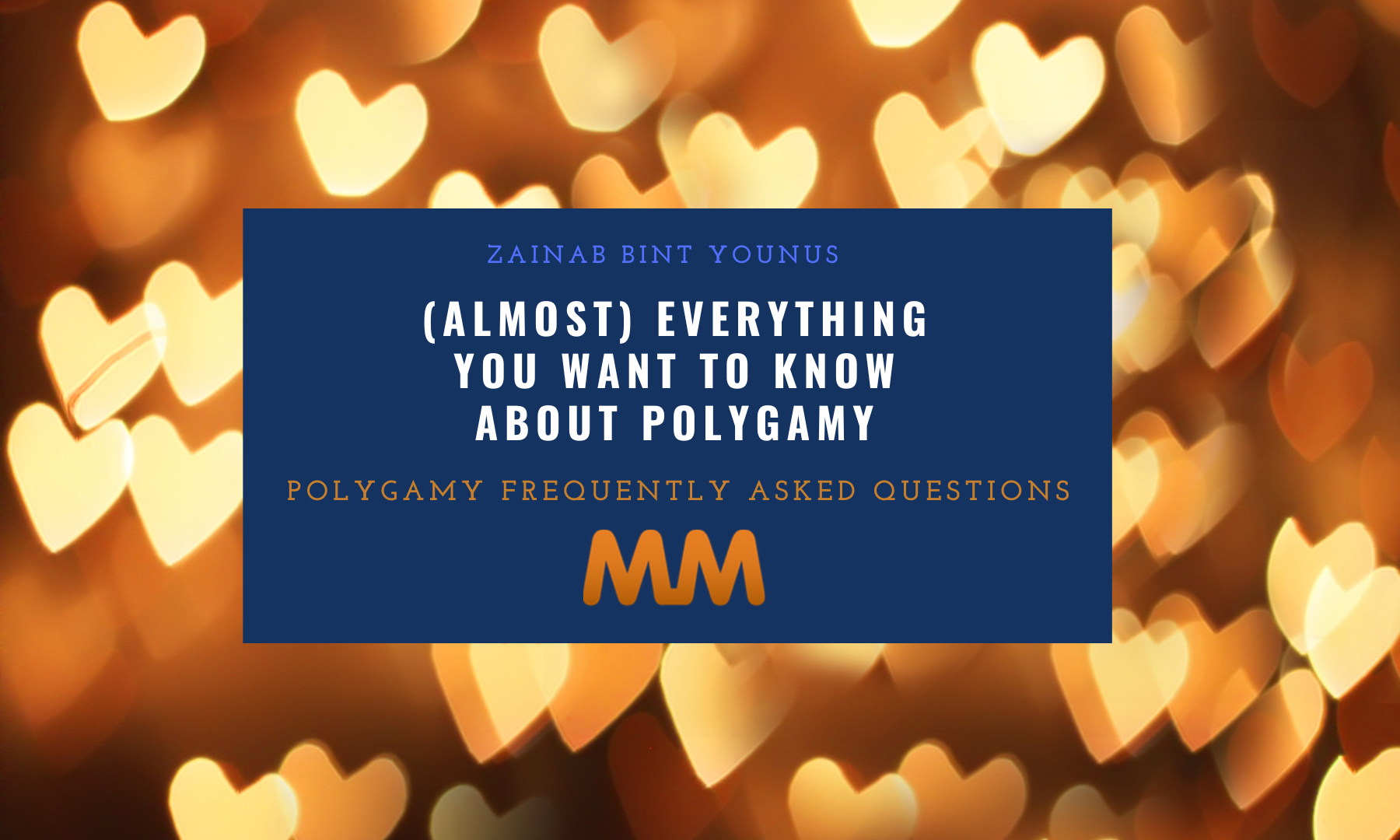 In part 2 of this article mini-series on frequently asked questions about polygamy, I will be answering more common queries on this ever-contentious, ever-popular topic. My responses come from my own perspective as a second wife, living in North America, in a polygamous marriage for over eight years.

– As a 1st wife, what should I keep in mind if my husband wanted to get a second wife?

The experience of a first wife in polygamy is very different from that of a second wife. There are a lot of things to keep in mind before one even enters polygamy. First of all, polygamy is an extremely challenging journey for everyone involved, especially first wives. It is often an incredibly emotional journey to even begin considering poly, let alone going ahead with it.

One issue that often comes up is that first wives wonder if the reason their husband is taking on a second, or wants a second, is because they (the first wives) are somehow lacking, deficient, or “not good enough” anymore. This is not true! In healthy situations, a man having more than one wife does not diminish the value or worth of any of the wives.

Consider the case of the Prophet

and the Ummahaat al-Mu’mineen. Does the fact that he was married to multiple women at the same time imply that one was superior to the others? That they were all somehow so lacking and deficient as wives that he had to seek out others? Absolutely not! Instead, it is important to recognize that each relationship is unique and stands on its own merit, without being related to the deficiency or inferiority of one person in comparison to another.

However, it is very important to ask one’s husband why he wants another wife, to understand his genuine motivations for doing so. It is a difficult conversation to have, but a necessary one. A common pattern that has emerged is men claiming that they need more sex. This by itself is not something to blame one person or another for, or to hold polygamy responsible for!

Instead, this is an opening to have deep conversations and honest evaluations of the existing marriage. Sexual desire is not something to be demonized – it is a natural part of human existence, and neither men nor women should be looked down on for expressing it.
Within the marriage, this becomes an opportunity to examine whether there is an issue of mismatched libidos, underlying personal conflicts and tensions, and more. Consider marital counseling or sex counseling. How often does he want to have sex? How often do you currently have sex? How can you make it so that you can reach a happy medium? All of this requires having a healthy perspective of sex, ensuring that sex is satisfying and fulfilling for both of you, understanding cyclical desire in women, and the emotional as well as physical value of sex for both partners.

Finally, (potential) first wives should prepare themselves for a lot of personal inner work: discovering and addressing one’s own insecurities, building up self-esteem outside of the marital relationship, focusing on your own personal motivations, hobbies, and projects.

– What are some of the perks of being a second wife?

For myself (and many others!) the perks of being a second wife include having lots of personal time to focus on things like school, work, da’wah, and family relationships. I have a child from a previous marriage, and polygamy gives me the time and space to focus on raising her (and alhamdulillah, I have a lot of very close family support).

Additionally, I have a lot less stress over things like housekeeping and cooking! My husband is mashaAllah already very low maintenance, and often cooks his own meals; however, my internal conditioning means that I tend to ensure that I cook and keep things a little tidier than I do when he’s not around. For the most part though, we like to spend quality time together; hanging out, talking, going out… which leads me to the next perk of being a second wife.

One benefit is also the element of “absence makes the heart grow fonder.” Time away from one another gives you the opportunity to miss each other – and makes your time together even more valuable. You prioritize the time you have together, and how you want to spend that time. My husband and I value our time together, plan out our days, and try to get a little bit of everything done – taking care of our responsibilities but also thoroughly enjoying one another’s company.

– Is it easy to accept being a second wife?

As with so many of the other questions, it all depends on the situation! For myself, polygamy was and is easier than my monogamous experience was – this marriage is a healthier one than the previous one, and polygamy is just a detail in the big picture.

As a second wife, polygamy has required a great deal of inner self-work, navigating insecurities, figuring out healthy relationship skills, and adjusting one’s life plans accordingly. In truth, how “easy” polygamy is (or isn’t) is really not too different from how “easy” any relationship is: it all depends on what you put into it, and how you choose to handle it.

Many people struggle with the label of being a first or second (or subsequent) wife, but it is important to remember that there is no hierarchy of wives in the Islamic paradigm: each woman is a wife, with her own marriage to be concerned about. Labeling others or oneself is never healthy when it comes with cultural or emotional baggage and connotations. Instead, focus on your identity as an individual, as a wife in a marriage, and most importantly, as a believing Muslim woman!

This will be different for each individual wife! It will obviously depend on whether she has kids or not, how many kids she has, if she’s a SAHM, if she works part time, if she works full time, etc.

My personal schedule is structured around my schooling (classes during the school semester), teaching madrasah, working (I used to work in retail; currently I work remotely), and time with my child and family. On the days that my husband is with me, I (usually) tailor my day accordingly – I try to cook, spend quality time with him, and just generally make other things slightly less of a priority.

The most important part of figuring out one’s schedule is keeping it busy and productive in a healthy sense. Prioritize your spiritual well-being through worship and learning, make sure that family responsibilities are taken care of, and give your marriage a healthy amount of attention and care without making it the absolute center of your universe.

There is much to be said on the topic of polygamy, and many more common questions to be answered! These are just a few of the frequently aired concerns regarding polygamy, and I pray that these answers have been helpful to readers. InshaAllah, future posts will address other issues related to polygamy. What topics would you like to see covered?

To read more about polygamy from this author, please see:

– What to Expect When You’re Expecting… Polygamy

Imam Al-Ghazali: The Hero I Stumbled Upon

All That is In The Heavens [Part 2]: Because You Exist