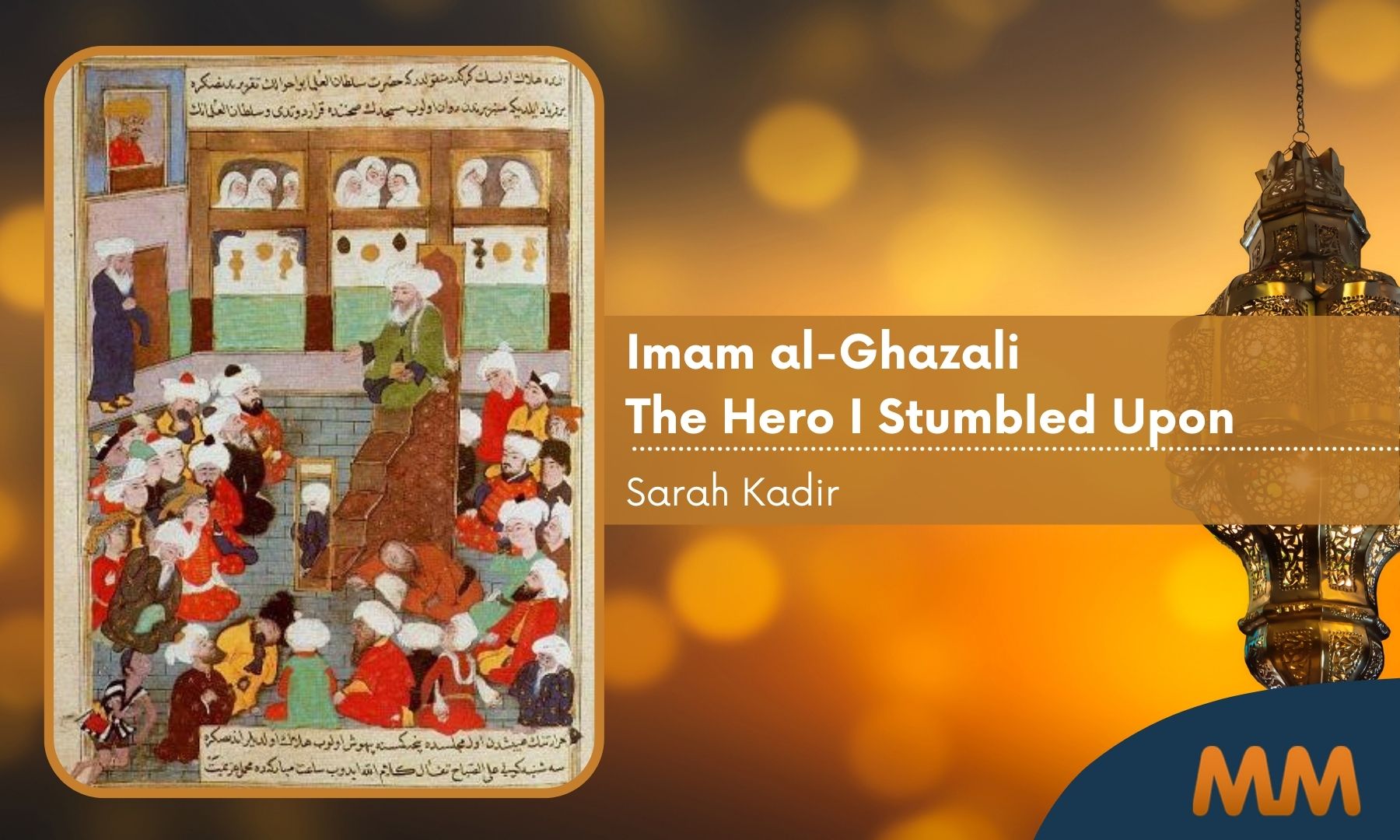 Sarah Kadir shares her turbulent spiritual journey to Islamic mindfulness, in the company of her hero, Imam al-Ghazali.

When I started my research on Islamic mindfulness, I was expecting the research to change me, but in a way that would resemble a scene from ‘Legally Blonde’: a smiling me, who had finally injected some color into her bland black wardrobe, a me who had given up the use of the odd profanity I mutter under my breath every time I find myself stuck behind a slow walker. I pictured myself floating into rooms like one of those models in the shampoo advertisements, people pointing and squinting when they see me pass by; not because of my luscious locks but because my spiritual aura would be so bright!

This it did not do. I was not “changed”; I was more reconstructed. For a long time after I had completed my research, I felt like I was ambushed. I kept going over my life up until I had begun my research, trying to pinpoint where exactly I got had.

We tend to think that peace and happiness are attained through doing things like laughing, eating chocolate, and repeating mantras like ‘I am a social butterfly’, or ‘I ooze with so much beauty inside and out, that my sweat smells of roses- found exclusively at Harrods’. Islamic philosophy has other ideas.

I went through my PhD experience kicking and screaming. In Islamic teachings peace is attained when you surrender yourself to the will of God. A submission that requires you to come face to face with all your weaknesses. Conducting the research was like having an invisible spiritual mirror held up in front of me 24/7, reflecting the state of my soul and mind, and highlighting all my weaknesses. I had nowhere to run or turn to for three years, as I not only had to read and write about the Islamic philosophies on peace, but also analyze and explain the heavy concepts in great detail – all the while the ‘this is your weakness’ sign flashing in big red neon lights through my spiritual mirror. It was traumatizing, and at times that mirror flashed like a disco ball. But despite it all, looking back I would not change the experience. It was not what I wanted, but seldom do we humans want the things we spiritually need.

Who Was Responsible For This Spiritual Thrashing?

The subject of Islamic teaching is so broad, a person would need multiple lifetimes to cover all the Islamic opinions that exist. So, I had to choose one person whose teachings would be a focal point of my research. I decided to pray for guidance, and as soon as I started researching on the topic of mindfulness, I repeatedly came across Imam Abu Hamad Al-Ghazali. Prior to my research I had not known Imam Al-Ghazali and I had no idea that this was the man that would save me. I always thought my knight in shining armor would be someone who was…well… at the very least, alive!

Imam Al-Ghazali is known in academic circles for his many in-depth publications. But, Al-Ghazali’s lived experience inspired me long before his works did; and just like with anything really good you come across, I want to share him with you.

Here is a very short summary of his life, and an explanation of what moved me about him:

Born in the Persian city of Tuz in 1056, Al-Ghazali is known amongst the Muslim community as ‘Proof of Islam’ and ‘The reviver of Islam’. In his early years, Al-Ghazali lived in the Persian city of Nashapur, where he was a student at the Nazimiya Academy for twenty years. Here, Al-Ghazali became well versed in traditional Islamic teachings which included: Islamic jurisprudence, Qur’anic interpretation, the science of hadith, as well as the Ash’ari theology. It is also here that Al-Ghazali would make first contact with philosophical reasoning; studying under the then renowned theologian and scholar Al-Jawayni, who is believed to be the first scholar to have seriously studied the philosophies of Aristotle.

It is said that Al-Ghazali would divide his day between the traditional teachings of Islam and the rose gardens of the renowned scholar Abu Ali Al-Farmadhi, where he would learn the art of Islamic mysticism.

In 1091, at the age of thirty- five, following the death of his teacher Al-Jawayni, Al-Ghazali was appointed Chair of Theology at the Al-Nizamiyya academy in Baghdad (that’s today’s equivalent of being the Head of Theology at Oxford!) where he became a well-paid and well- respected intellectual, found usually in the service of the Sultans and Caliph.

Al-Ghazali recalls that at some point during his four years in Baghdad, he was plagued by the observation that Islamic teachings had been reduced to traditional and cultural practices that were propagated by Islamic scholars (including himself) to gain fame, fortune and favour with the Caliphs and Sultans; who would routinely invite the scholars to debate amongst themselves in the royal courts for entertainment.

The realization that his actions were not in harmony with his theoretical beliefs, created in Al-Ghazali a great sense of anxiety. For the next six months of his life Al-Ghazali lived in turmoil between staying in Baghdad and leaving his position, status, and wealth in pursuit of his ‘salvation in the afterlife’. Al-Ghazali struggled with this decision for some time. He states that, at night he would be resolved to leave his position and power in pursuit of the truth, only to find that by morning the devil had convinced him to delay this pursuit for a number of reasons; including his family’s well being or his own reputation.

Al-Ghazali explains, this turmoil was eventually resolved by force and that in the end the choice was taken away from him by God. He writes:

“For God put a lock upon my tongue so that I was impeded from public teaching. I struggled with myself to teach for a single day, to gratify the hearts of the students who were frequenting my lectures, but my tongue would not utter a single word: I was completely unable to say anything. As a result, that impediment caused a sadness in my heart accompanied with the inability to digest; food and drink became unpalatable (…)”

Eventually, his depression became so severe that Al-Ghazali felt that he was left with no other alternative but to leave his status in Baghdad in pursuit of ‘that which would restore peace to his heart’. He traveled to Damascus, then to Jerusalem, where over a span of ten years he sought to ‘cleanse his heart for the remembrance of God’. It was during this time in seclusion that Al-Ghazali wrote his most famous publication: ‘The Revival of the Religious Sciences’ or ‘The Revival’; the works I used for my research on Islamic mindfulness.

I was inspired by Al-Ghazali’s courage in the face of his suffering. As, to leave your wealth, family, and status, and to risk it all in the pursuit of God and submission to Him is not easy. It takes guts. Here is a man who gave it all up for God and inner peace. Here is a man who dares to go down a path very few would even consider, let alone actually take. A man who knows what he’s talking about.

I call Al-Ghazali my hero because for the longest time I felt like I was constantly ‘looking for something’, and I spent much of my life chasing…life; trying to find the experience or achievement that would make me stop wanting to give chase. That would make me feel complete and worthy. At times, I would stand in my own confusion wondering why after I had successfully accomplished all that I had set out to accomplish, I was still feeling as empty as I started. At times, I would reach my hand out into the darkness that enveloped me, hoping someone would take it; no one did. Then, when I least expected it, in the darkness I felt a hand in mine. Al-Ghazali took my hand and led me towards the eternal light of salvation. He did for me what no living man or woman was able to do.

Never in a million years did I imagine that I would be saved by a person who lived 951 years ago. Al-Ghazali is dead, but in the last three years he has been with me like no other living, breathing, human being has been. He has been my confidant and revealed to me truths that would make me cry, and then wiped away my tears – like a loyal friend. He has broken me down and then, like an inspiring teacher, given me the strength and courage to pick my pieces up and re-assemble them; this time helping me place them into their correct places.

Most importantly, he has taught me the power of the word and the importance of sharing our stories and our suffering with one another, so that we may inspire and support one another in this difficult journey of life.

This is why I share my story with you.

(Almost) Everything You Want to Know About Polygamy

Dr. Sara Kadir has a PhD in mindfulness in Islamic teaching. She recently launched the INsane project, where she shares her research findings via podcast and Instagram: https://instagram.com/insaneinsanproject?igshid=ldjzklrnlhsn