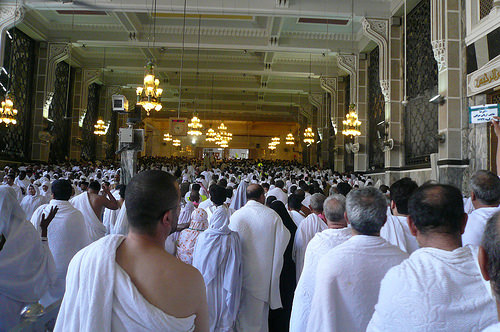 As we approached the green lights in the Sa’i between Safa and Marwa, my husband and I prepared to split up so that he could fulfill his obligation of jogging for a portion of the Sa’i. We had worked out a system in which he would run ahead and wait for me on the side as I caught up to him at a normal walking pace. It was amazing to me that although we were commemorating Haajar’s actions, the men were supposed to run this stretch (according to our Hajj leader), but not the women. It was hard to fight the urge to join my husband and also run, but when I had asked my Hajj leader about this in anticipation of my feelings, he had discouraged me from doing so. If Haajar could have run between Safa and Marwa, then so could I–I am also a woman! It took some time and concerted effort for me to come to terms with this rule, but I reminded myself that the reason I chose the Hajj package I did was so that I could be under a scholar that I trusted to the extent that I could follow without hesitation anything he said when I had a question related to the fiqh of Hajj.

So I simply forced myself to walk alone when my husband ran. It was very peaceful this time we were making Sa’i. Although Hajj was the first time I had ever visited Makkah, this particular Sa’i wasn’t the first Sa’i I had performed on my journey. I was comfortable with the rules of Sa’i and knew what to expect by now, so I felt internally settled in a way that was much different from the first time I had performed Sa’i. On top of that, the crowds were very light for some reason this time around and there was plenty of breathing room, even enough space for the cool air’s respite to reach and revive me. But then I noticed it–a jagged motion in the corner of my eye that caught my attention and disrupted the calm.

It was a man, another Hajji. The jagged motion was the way in which he was moving, exerting all of the effort he could to run. But he wasn’t really running. As a matter of fact, I was moving faster than him at my normal walking pace. This older man, whoever he was, from wherever part of the earth he was from, was limping as he ran. His body moved diagonally up and down at a sharp angle every step that he took. It was clear to me that he must have had some sort of chronic condition that he dealt with on a daily basis, not just that something transient, like a twisted ankle. His face was screwed up in a mixture of what I thought was determination and pain. This man looked relatively alone–there was no one with him and from his dress I couldn’t tell much about him besides the fact that he appeared to be from the Indian Subcontinent. The greatest thing about Hajj is that, in many cases, it is very difficult to deduce information about how rich people are; he appeared like many of the Hujjaj do at this point in the journey: tired, dusty, and worn out from being away from home for so long.

Before I could turn my attention back towards myself, tears were streaming down my face. Seeing this man so determined to fulfill his obligation albeit the pain was so humbling to me. Here was a man seemingly incapable of running, but doing his best to run or “rush.” Whether or not he should have been exerting himself so fully is a question I hope he had a chance to ask a qualified scholar about because I am not sure if my Hajj leader would have encouraged or discouraged him to try to run. But all that considered, the more I think about him now, the more I realize that it is not my place to guess  how severely his running impacted him physically and whether or not he was correctly informed or misinformed when it came to this specific requirement. All I knew is what I saw, and what I saw was a man whose love for His Creator in that moment surpassed the physical world, his body, the people around him, time and space altogether. It was as if he was limping along in his own universe, aware only of the fact that he was directly in the sight of His Master.

And in my case specifically, the men had to perform the Sa’i in a more rigorous manner than the women did.  That’s when the obligation of Hajj as a whole felt right to me.

Seeing this man striving and struggling during Sa’i helped me realize the representation of the entire family at the core of the rituals of Hajj–the Prophet Ibrahim, Haajar, and Ismael–the most important to me as a woman, Haajar. And not just having Sa’i be for women to perform only, but for everyone to perform regardless of their sex.  And in my case specifically, the men had to perform the Sa’i in a more rigorous manner than the women did.  That’s when the obligation of Hajj as a whole felt right to me.  When I started to learn more about Islam on my own during high school, I decided that I would study what Hajj is and what the rules are only when I was finally going to Hajj. I don’t know if that this was the best idea, but it was a practical one. When I finally was planning on going for Hajj, I began to study all of those places and all of the complicated logistics. It was stressful and hard to connect to because it seemed so detailed and remote, as I had never been to Makkah or Madinah.  I was so worried about the itinerary of the trip and trying to memorize all of the rules and steps that I had been only considering how to perform Hajj while neglecting what Hajj meant in Islam. What was the significance of Hajj? Why did it change so many people’s lives? Those are the questions that I found answers to in Makkah and Madinah.

One of the most important things to me as an individual is my identity as a woman and how I feel so marginalized, underrepresented, and shut out of nearly every institution I interact with–the United States government, the university, the local masjid, everything. The frustration inside my heart eased when I saw that man–I felt honored, acknowledged, and (at the most basic level) truly included–not just as a token woman–within this huge Islamic obligation. As I realized this walking between Safa and Marwa, I felt free and could fully commit myself to this beautiful ritual within Hajj.

The Eastern Toilet: A Hajj Reflection

Hajj Reflections: The Mortality of Man

Save Rohingya: A Physician’s Journal, Part 2