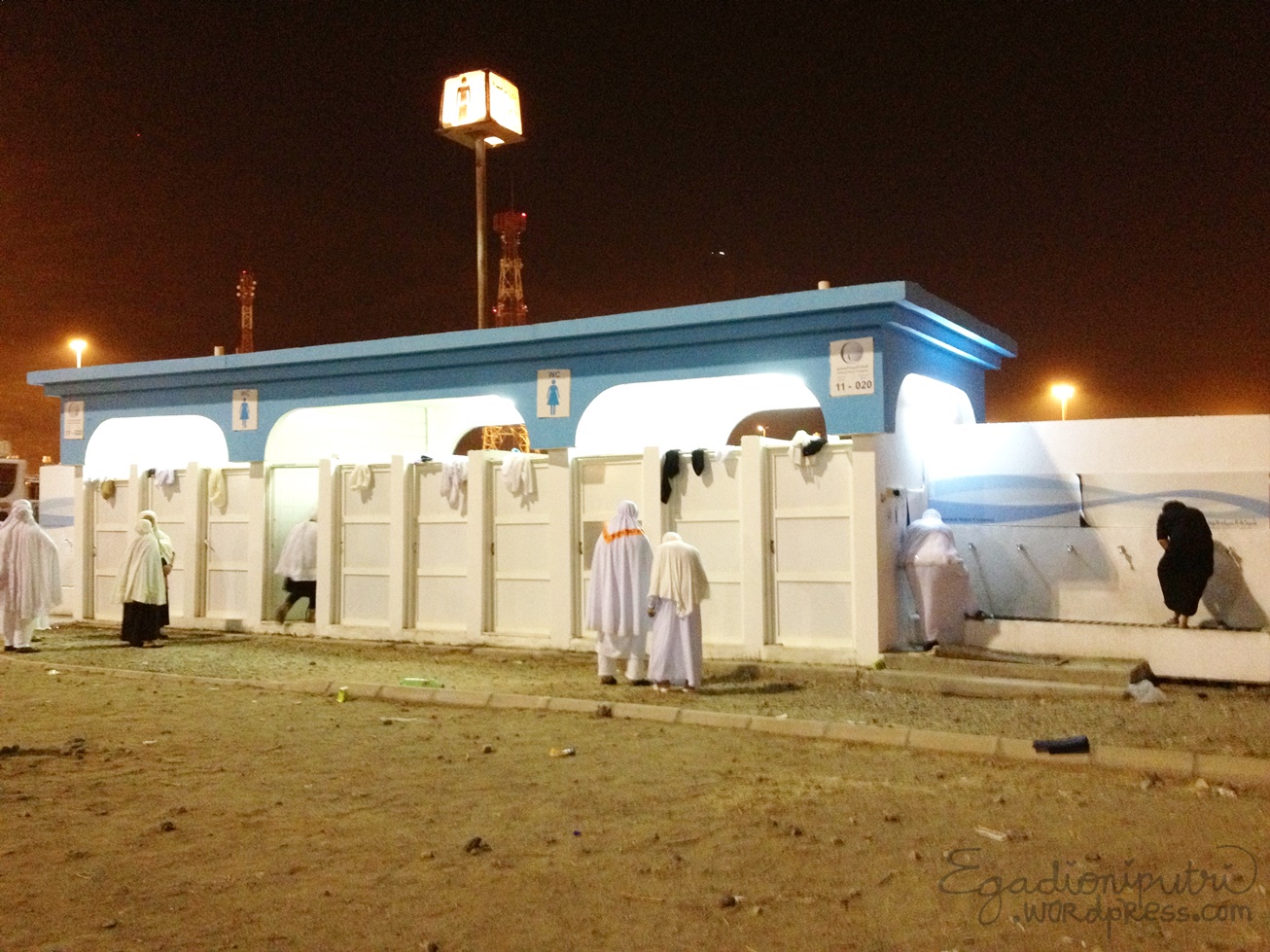 When I began telling people that I was planning on going for Hajj, I was surprised to hear one piece of advice over and over again—use the squatting toilets in Mina. Although I was eager to hear suggestions on how to make my Hajj easier and better, deep down inside I knew the issue of the Eastern toilet was one that I would have to fight the most with. The only previous exposure I had to the Eastern toilet was when I avoided it at all costs during the two-and-a-half month trip I took to Pakistan when I was fourteen. I thought the toilet in the floor was gross and primitive and I had no interest in using it then, and honestly no interest in using it while I was at Hajj.

Ultimately, I decided to follow the advice I heard about the squatting toilets, but I knew I had to figure out how to use one and then get used to it. One of the things our Hajj leader emphasized was that the easiest way to spoil the Hajj is through complaining about small things. Getting used to the squatting toilet for me also meant getting over myself, so I promised myself to exclusively use the squatting toilet while we were in Makkah the days before Hajj started. I would keep up this regiment to prepare myself mentally and spiritually for the days of atrocious bathroom accommodations in Mina, and then as soon as I was out of my ihram, I’d go back to the Western toilet. So, I began to use the Eastern toilet in our building before the days of Hajj actually started.

Little did I expect, a terrible stomach bug kicked in a couple days before Hajj started and it continued to plague me for the rest of my trip, including the days of Hajj. My stomach bug and subsequent GI issues were so horrid that I went from forcing myself to using the squatting toilet to wanting to use it. Using the squatting toilet ended up being the only way I could relieve myself painlessly. Coming to that realization broke down years of prejudice I had against the Eastern toilet and, by extension, its users. Having a Western toilet in Pakistan is considered “modern,” or “keeping up with the Jones’s.” I had internalized that idea while I was in Pakistan, and it added to my already negative opinion of the Eastern toilet. Coming from my cushy American point-of-view, previously swearing to never use an Eastern toilet in my life—I’m just so glad that I was proved wrong.

It’s sad to admit this, but yes, my prejudice against the Eastern toilet exposed that the superiority I felt towards many of my brothers and sisters in Islam simply because of the place I was born in and continue to live in, and the subsequent lifestyle of luxuries that being an American in my socioeconomic position affords me. It was disgusting to feel that way deep inside, but I discovered it during my Hajj journey. I heard from many people who have been on Hajj mystical and mysteries sayings like you find out who you truly are at Hajj and Hajj is the biggest spiritual test. In many ways, I expected another issue to come up along my journey, like getting mad or feeling lazy. But I was truly surprised that a deep-rooted arrogance  born out of nationalistic and capitalistic ideals turned out to be the issue that revealed itself to me.

It wasn’t a glorious spiritual moment, nor something to feel proud about (nor something to feel proud for sharing with whoever reads this article.) Allah taught me in the most disgusting place with the most disgusting instrument while I suffered from a disgusting sickness that I am not superior to any other person of the Ummah, no matter where they are from or what they have. This kind of mindset, which I attribute to the American paradigm, is exactly what keeps the Ummah from being together as one. I’m not saying I’ve been illuminated and have healed my heart from this sickness yet, but my eyes have been opened, at least, through my humbling—no, I’d say humiliating—lesson. The first step to fixing something is knowing that it is broken, and inshaAllah one of the things I hope to work on is to rid my heart of all and any arrogance.

Thanks to my Hajj roommate’s suggestion, I currently have in my possession a Squatty Potty stool, which is the best I think I’m going to get for the time being. It’s not as great as a real Eastern toilet, but hey, it’s halfway there. When I think about using the stool now, I am reminded that I have looked down upon others based on minute cultural differences and that I have a lot of work left to do to rid myself of those prejudices.

When Children Die: On Tragedy, and What is Reported about the Death of Believing Children

A Scintillating Secret To A Successful Marriage