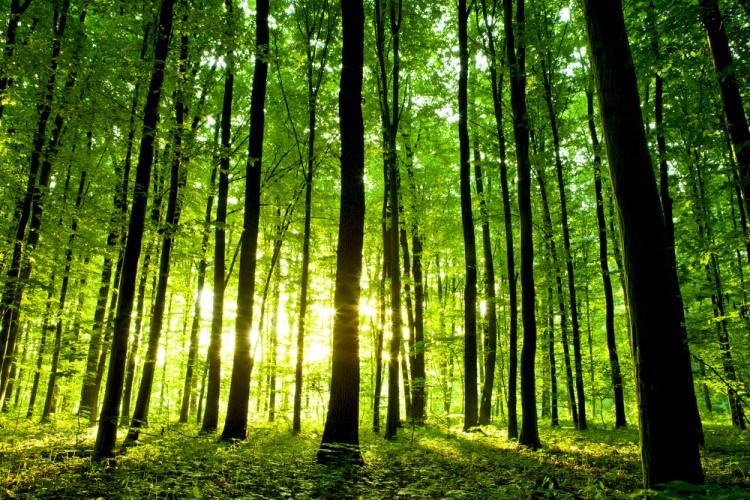 I was born and raised in an urban setting with very few trees. The trees that were in the city were overshadowed by buildings and skyscrapers.

I write this article in dedication to my wife and children; as we ventured on a major life-changing event we found ourselves surrounded by these beautiful trees, as high as we can see. It reminded me of why trees are important, and how Islam mentions trees in such a positive light. I was also reminded of how Jannah is said to be covered in beautiful nature and unimaginable trees.

Not only are they giants amongst us, Allah

has given them special standing in the Quran. In Surah Al-Hajj, Allah

“Do you not see that to Allah prostrates whoever is in the heavens and whoever is on the earth and the sun, the moon, the stars, the mountains, the trees, the moving creatures and many of the people?…” [22;18]

He places trees at the same level as other notable creations. We tend to overlook trees -and flora in general- because they don’t do anything that we can see and to receive instant gratification.

There is a saying that goes “If you believe in tomorrow, you plant a tree today.” Trees are associated with nature and wildlife. It keeps life on this beautiful planet sustained, through the oxygen cycle. It is like the lungs of Earth. Unfortunately, just as smoking damages our lungs, pollution has damaged these trees. Add logging to the process and our forest is decreasing by the minute.

Protecting the trees and nature is a beautiful concept of Islam. Yet trees are sometimes overlooked. I want to change the perception of one of Allah’s

creation through this article. In my previous article, we discussed how the Earth is a creation of Allah

, and it is our obligation to protect it according to the Quran and teachings of the Prophet

“And it is He (God) who has made you successors upon the Earth and has raised some of you above others in degrees [of rank] that He may try you through what He has given you. Indeed, your Lord is swift in penalty; but indeed, He is Forgiving and Merciful.” [Surah Al-An’am;165]

The Quran also talks about the first man created and the very famous story of the forbidden tree. Allah

and his wife to approach and enjoy everything except one tree. Allah

forbade them before they were given abode in Paradise:

“And We said: O Adam! Dwell you and your wife in the Paradise and eat both of you freely with pleasure and delight of things therein as wherever you will, but come not near this tree or you both will be of the wrong-doers.” [Surah Al-Baqarah; 35]

The story goes on and they were deceived by Shaytan. Our very first deception with Shaytan has to do with a tree. SubhanAllah, so trees clearly play a role in our Islamic history.

in the Quran also uses the tree as an analogy to describe a good deed.  Allah

“See you not how Allah sets forth a parable? – A goodly word is as a goodly tree, whose root is firmly fixed, and its branches (reach) to the sky (i.e., very high).” [Surah Ibrahim;24]

This is beyond the diverse species of trees mentioned in the Quran. From the palm tree to the olive tree.

uses the tree as analogy as well when describing the believers and nonbelievers.

In a narration by Abu Hurayrah: “The Messenger of Allah

in the Quran also advises us to use the blessing that comes from a tree, In Surah Al-Mu’minun, Allah

says (interpretation of the meaning):

“And a tree (olive) that springs forth from Mount Sinai, that grows oil, and (it is a) relish for the eaters.” [Al-Mu’minun;20]

Hence the numerous benefits of a blessing we tend to overlook.

In Islam, trees are associated with all that is good, in this world and the hereafter. Even our clothes in Jannah will come from a tree. The Prophet

said: “Tooba is a tree in Paradise, one hundred years big. The clothes of the people of Paradise are made from its calyces (outer casing of its flowers).” [Ibn Hibbaan and Saheeh al-Jaami’; 3918]

This is something we can relate to as a clothing we wear comes from plants, be it a shirt or a pair of jeans.

had a relationship with nature, including trees. Allah

mentions in the Quran he tree under which the Prophet

accepted his companions’ pledge of allegiance unto death and not to desert him.

This happened during the campaign of Al-Hudaybiyah, when he heard of the betrayal of the mushrikeen. This tree is also mentioned in the Quran (interpretation of the meaning):

“Indeed, Allah was pleased with the believers when they gave the Bay’ah (pledge) to you (O Muhammad) under the tree…” [Al-Fath;18]

used to go and stand next to a tree or palm-tree on Fridays. A woman or a man of the Ansaar said: “O Messenger of Allah, should we not make for you a minbar (pulpit)?” He said, “If you wish.” So they made a minbar for him, and when the next Friday came, he was shown to the minbar. The tree then cried like a small child, and the Prophet (saw) had to come down and hug the crying tree until it calmed down. Jaabir said: “It was crying because of the dhikr (remembrance of Allah) that it used to hear.” [Al-Bukhari; 3319]

Trees can be our key to entering Jannah. Our Prophet Muhammad

said: “There is no Muslim who plants a tree or sows a field for a human, bird, or animal that eats from it, but it shall be reckoned as charity from him.” [Bukhari and Muslim]

tells us to sow, but instead we uproot, what kind of followers does that make us?  In a time where so many things are abstract and changing, Prophet Mohammed

gave us clear instructions on how to engage with our surroundings. One of those detailed instructions is: “Do not uproot or burn palms or cut down fruitful trees.” [Al-Muwatta]. These are clear guidelines that if followed, would have helped us today in our quickly changing environment.

After entering Jannah, trees are used as a means of reward. It was narrated from Jabir

that the Messenger of Allah

said: “Whoever says SubhanAllah il ‘azeem wa bi hamdihi (Glory and praise be to Allah, the Almighty), a palm tree will be planted for him in Paradise.”  We don’t want to keep our part Jannah flat and plain, do we?

We learn in science of the many immediate benefits trees provide. So make sure you make some time, even if once a year, to plant a tree or volunteer in such activities as a family. Trees are part of many ecosystems and play a vital role in sustainability and maintenance of habitat. Many proverbs use roots of trees to show strength, as trees not only provide shade and food, they also provide stability to the ground. As a parent, I make it a point to appreciate these creations with my family, especially my kids, so they can grow up with the same respect.

Things you can do with your community and family:

All I Want For Christmas Is… For Muslims To Read This

Five Ways To Deal With Disappointment