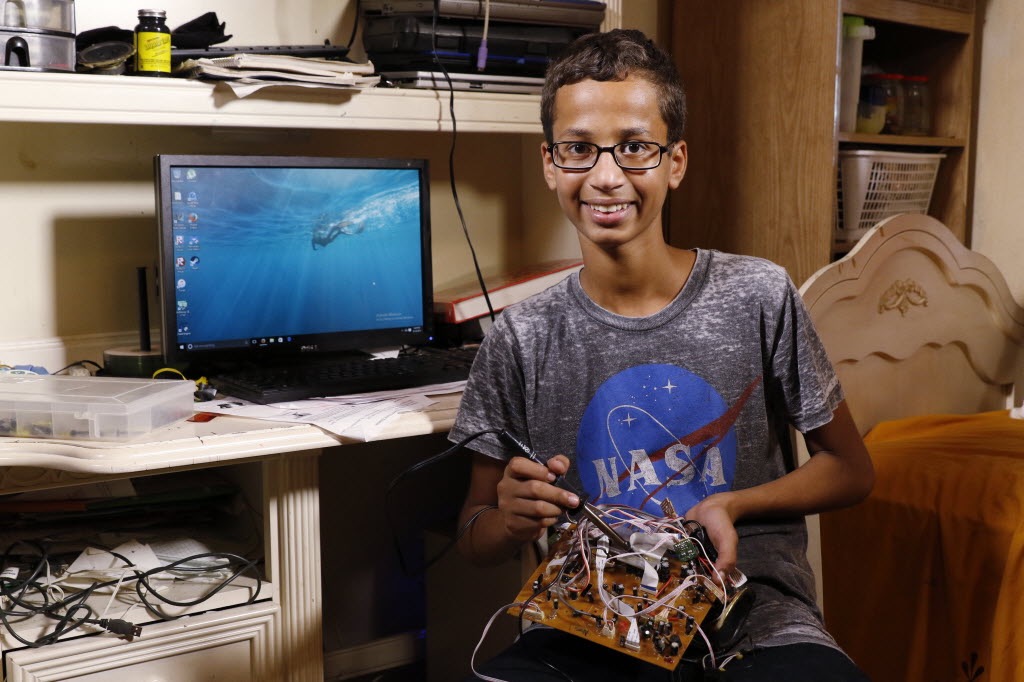 “So you telling me they got all the way to the semifinals and had the STEM competition judged by volunteers?” I interrogated my friend Dajuan Patterson. “Yes bro, it blew my mind. It was nothing I could do though to challenge it. We just put our best foot forth and lost with our heads held high,” he replied. My eyes welled up in frustration and I said the only thing that made sense at that time, “They’re too young to know they can be shorted like that.”

My friend Dajuan has been a full-time community servant ever since he could tie his shoelaces. Last year he headed up a robotics program in Baltimore where middle-schoolers were able to showcase their STEM skills in a city to statewide competition. No more than 12 of them spent countless evenings refining their inventions over a course of months. As each weekend passed, they succeeded at outdoing teams from around the Baltimore area.

In the culmination of the competition, high ranked teams were invited to face-off head to head, best invention winning the first place prize. What appeared to be a life changing atmosphere and opportunity, ended up being an emotional disaster. The judges for the competition were not engineers, STEM students, or even robotics enthusiasts. They were regular students who earnestly wanted to contribute their time on a random Saturday. Worst of all, they were all from that county. Needless to say, the Baltimore team lost. Dajuan was reminded and his team informed of an age old lesson; at no point in time can African American children afford not to be two even three times as good as their counterparts.

There’s a significant amount of emphasis being placed on STEM programs in urban communities, but we’ve been so far from the race for innovation it’s overwhelming to think about the ground black and brown children have to cover. According to www.census.gov, “Blacks and Hispanics have been consistently underrepresented in STEM employment. In 2011,11 percent of the workforce was Black (up from 2 percent in 1970).” This number becomes more germane to improving disparities when we look at business insider’s recent ranking of software developers as the number one fastest growing professionals in the world. IT and all its subcategories take a front running stance in the race for job and income equality. Moreover, skills such as software development don’t need the rigidity of university courses and can be learned with the help of a teacher, which makes IT a prime target. 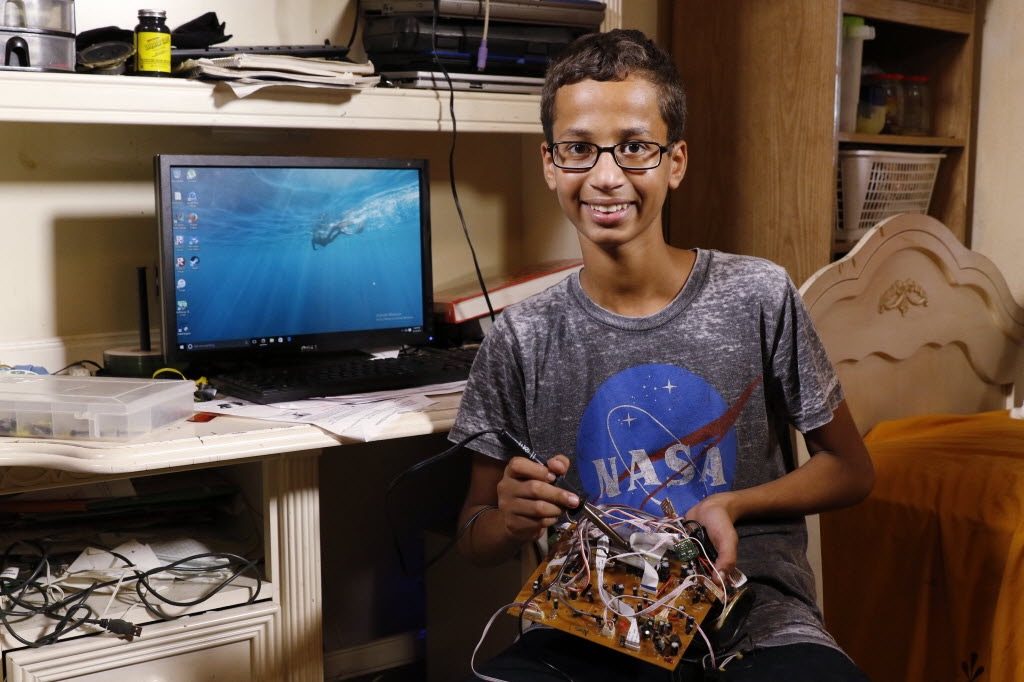 Ahmed Mohamed from Irving,Texas was an anomaly to the above narrative. On September 14, 2015, in a high school known for embracing STEM training, he took his scholarship into his own hands, much like Al-Khwarizmi who fathered algebra without the dazzling instruments available today. He spent the weekend inspecting, prodding, testing and eventually making a clock out of assorted parts. Like any visionary, Ahmed flew into school the very next Monday to show those whose opinion he valued the most his ingenuity – teachers. Ahmed held out his new clock anticipating congratulatory remarks and instead was asked flatly, “Is that a bomb?” Ahmed attempted several more times to present the gadget he labored over and, within an hour, was accosted by Irving police, subsequently sitting through hours of interrogation.

The 24 hour news cycle embraced the story, and in a peculiar fashion, Muslims all over America engaged in a lobby for rights to Ahmed’s race and ethnicity. He went from a brown boy, African, Sudanese immigrant to finally becoming black in the “racial draft” that took place. A frenzy for what community would claim him exposed a well-known but unspoken rift in the current state of Islam.

Racial, ethnic and tribal lines polarize and paralyze Muslims. Unfortunately these divisions invite non-introspective proclamations through a narrowed lens on the effects of things such as racism. All the banter back and forth left out key points in the 15 second media free-for-all. Ahmed in any other setting in America would be seen for his blackness first. Second, his religion added to the perception of his alleged criminality. Lastly, Ahmed’s crisis exposed the intersection of racism, Islamophobia, and disparities in STEM development. Not too many times in today’s America will black children be accused of terrorist acts outside of their already blanketing stereotype. Usually they are apprehended for suspicions other than bomb engineering.

After being wrongfully accused, almost every major tech company sent warm affirmations to Ahmed via Twitter and any other medium available. President Barack Obama hosted him and his family at the White House and now, after all of the Google campus tours and speaking engagements, Ahmed’s family has left the U.S. altogether. They will be residing in Qatar as of last week.

A Case for Collaboration

But what about the individuals, households, and communities that rallied for the identity of Ahmed? Is there a tangible repercussion that can be deduced? Rafee Al-Mansor, a student from John Hopkins University, released a stellar documentary two years ago, that attempted to identify why immigrant masjids and African American masjids are so separated. Among many probing questions, they asked if the stereotypes attributed to African Americans make the division persist. Many answered in the affirmative.

What the Ahmed Mohamed fiasco uncovered was that stereotyped or not, both communities value education and identity. So in the midst of trying to repair perceptions and dilute imprisoning ideologies carried on from histories of colonization, Muslims in America have the opportunity to collaborate on one segment of STEM education, IT. Just as being able to use the internet fluidly, coding, programming, and software development will become standard all across the globe in years to come. Without a shadow of doubt many communities are stocked with professionals in these fields. In urban neighborhoods access to hands on knowledge and equipment to develop those emerging skills are few and far between at times. So service based relationships under-girded by volunteering expertise in these areas would not only be an unprecedented theory to test, but also a landmark for bridge building.

I sat in an almost empty musallah, only filled with the faint murmurs of two elderly brothers practicing Qur’an with Abdul-Hakim Lucky, Amir (president) of Masjid-Ul-Haqq in West Baltimore. He spoke optimistically about the IT program he has been working to develop for some time now, “So many people want to discuss the plight of African American Muslims but it’s always on the peripheral. Nobody wants to address the root causes.” Sitting up on one knee he continued, “A significant amount of men have been excluded from bread-winning roles because they lack a marketable trade.”

Throughout the past year he has finalized what will be one of the first IT certification courses offered by a predominantly African American Masjid. “What is your first main goal of the program?” I asked. “We were blessed enough to receive 15 fully operational computers recently so that puts us in the position to initiate the first phase of training 50 people. It won’t happen all at once but I believe having a pool of 50-60 IT professionals as well as other tradesmen and women puts our community in a much more empowered position,” he proclaimed.

When asked about the benefit of cross community collaboration Lucky remarked, “The essence of Islam is helping one another in areas of deficiency. I don’t have all the answers and our community welcomes anybody who will contribute wholeheartedly.” Lucky’s program is projected to launch within the next few months following much needed construction. He currently collaborates with Muslims of all origins on sustaining this cooperative effort

Thomas Friedman wrote in his critically acclaimed book, The World is Flat, “Nobody works harder at learning than a curious kid.” With the investment of time, Muslim communities across the U.S. may be able to begin nurturing this curiosity and creating bonds that will bind them forever. After all, it was that same curiosity that played a part in Ahmed Mohamed sitting face to face with police for an hour, being questioned as to whether or not he had intended to blow MacArthur High school up, elevated him to instant stardom, and exposed one of Muslim America’s greatest cases for collaboration.

Muslimmatters launched a new column today by Tariq Touré, a Muslim essayist, poet, educator and public speaker from Baltimore, Md. He uses prose as medium for shedding new light on issues such as social justice, racial inequality, black culture and Black Muslim narratives. In 2015, he was honored with the Real Men of ‪Baltimore‬ award by 92q jams radio station and the Alumni Excellence award by his Alma Mater Bowie State University.