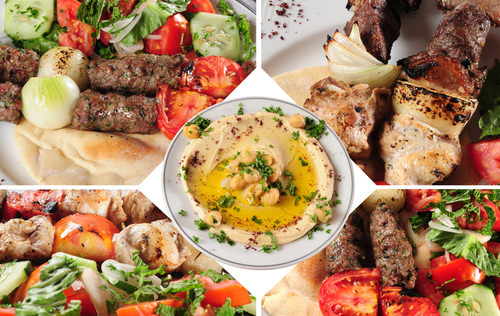 Given that the American Muslim population was just recently found to be the most racially diverse religious group in the United States, it is only natural to wonder about the food scene that has flourished as a result of the many cultures coexisting within one nation. With that, enters the halal food scene. While halalies (halal foodies) might know the ins and outs of the best places to be, in the most interesting towns and states, the rest of us still aren’t really sure.

Enter then, the first annual ranking of the best places to be for the most delicious halal noshing experiences.

Shahed Amanullah is the founder of Zabihah.com, the first-ever halal restaurant review database, consisting of over 10,000 reviewed restaurants and markets worldwide and boasting 10 million annual users. Sameer S. Sarmast is the founder of Sameer’s Eats, the web’s most popular show for discovering the best halal eateries. The host of The Halal Food Tour, Sameer’s Eats is instrumental for putting halal food on the American culinary map.

With the input from them both, we have been able to put together a list of the best fourteen places for 2014. Let us know if you agree- or better yet, disagree, and have a better place to add to the list!

Located in downtown San Francisco, the Tenderloin is known as the ragged and determinedly dingy domain of the city’s most down and out. Yet there’s a sort of grittiness found in the area that is not seen much anymore. An area that used to have no restaurants, the Tenderloin attracted the attention of a restaurant owner and the rest is history. “Because of the strength of a single restaurant, Shalimar, multiple halal restaurants have now pushed the area from being down and out into possessing a booming food industry, solely on the back of the Muslim food dollar,” Shahed Amanullah, founder of Zabihah.com, reflected. Drawing people from all over the San Fran area, the restaurants in the Tenderloin are primarily South Asian, but Chinese, Italian, North African and other cuisines are now beginning to feature predominantly as well.

“When you talk about New York City as a distinct area, you have to recognize how it’s all about the halal carts and how they transformed the field for food carts everywhere,” Amanullah divulged. With a near-perfect rating of 9.2 out of 10 on Foursquare, The Halal Guys wins the top twenty five most popular food trucks hands down. It’s not even a question as to what to purchase when you’re standing in line: “chicken and gyro over rice with as much white sauce as is humanly possible to ingest,” says Foursquare and Buzzfeed.

A major east-west thoroughfare in the Chicago metropolitan area, the area boasts the perfect way to get a fix on South Asian food, all in a ten-block stretch on the Far North Side. Known as the most multicultural street in the city, Devon features businesses run by Indians, Pakistanis, Iraqis, and Russians, while catering to Hindus, Jews, Muslims, Jains, Sikhs, and Christians. “It’s the only place I’ve ever seen where there is a kosher butcher near a halal butcher,” Amanullah divulges. South Asian restaurants in the area jockey for the most authentic and spicy, but the history is unconventional, to say the least. Although all of Devon used to consist of Orthodox Jews and Russians, Indians, Pakistanis and Bengalis moved in and took over the street. As a result, the street boasts a whole gamut of spices.

It’s easy to let New Jersey’s size fool you, but don’t discredit this small state. Known as the absolute halal hub, Sameer Sarmast of SameersEats.com was quick to call it a “halal paradise.” Although the city was dominant in silk production during the 19th century, it has since evolved into a major destination for Hispanic emigrants, as well as Arab and Muslim immigrants. While the majority of people in North Jersey are Middle Eastern, with a large number of Arabs residing in Paterson, there are a lot of Bangladeshis living in the area as well. “So you find a variety of restaurants, lots of halal restaurants,” Sarmast said.

One of the heaviest populations of Arabs and Muslims in America, Dearborn is known as a utopia for those that do not reside within the town boundaries. The center of the town is Ford Road, which is also the most concentrated area. The predominant Arab concentration is Lebanese, although the area has mellowed out into a pan-Arab population in recent years. The town’s economic strength is reflect “in the number of establishment on Ford Road, most of which are Lebanese… but in recent years, a lot of mainstream meat and potato places have opened up for the younger crowd.”

Known for being the heart of the Muslim community in Houston, Sugar Land is also one of the most affluent and fastest-growing cities in the state. It is only natural, then, that its diversity is reflected in the fact that, as Amanullah said, “no one type of food dominates.” “Two things make it unique,” he continued, “one is its very Texas culture – Southwest and Mexican cuisine and meat- and the second is in its Asian immigrants and cuisine, reflected in Chinese and Vietnamese cuisines.” One of the more diverse scenes in America, Sugar Land has come a long way from its more homogenous sugar plantation roots. Don’t miss the opportunity to sample from the different ethnic contingents during your time here.

“It’s the kebab capital of America,” Amanullah said immediately when we brought up the area. “Everyone focuses on kebabs, because they’re a comfort food for people coming from different places. If you like kebabs, it’s the place to come to. It’s the only area where there are restaurants and food joints open 24 hours in a day, so it’s very fascinating.” Northern Virginia comprises of several counties, but is the widespread region radiating westward from Washington, DC, and the most populous region of Virginia. With the commute from DC, it is only natural then to rely on everyone’s favorite comfort food.

Minneapolis is the 48th largest city in the United States and known on the down low as the “Somali capital of America.” Although “it doesn’t have a large number of restaurants,” Shahed confided, “the food is amazing.” The dominant cuisine here is Somali, reflecting the area’s population, which has a long tradition of charitable support through progressive social programs and volunteering. In one generation, Minneapolis’ Somali residents grew from penniless immigrants into wealthy entrepreneurs, banking on their popular cuisine to contribute to the greater community. Right at the crossroards to Arab, African and South Asian food, Somali dishes are like no other.

Known as the most ethnically diverse urban area in the world with a population of over 2 million, 48% of which are foreign-born, Queens is a place like no other. “There are a million halal restaurants in New York City,” Amanullah said, “but Jackson Heights is the best place to go.” A very vibrant neighborhood, Jackson Heights is a dense working class area – but any place where the cabbies go to eat is known as having the most delicious food. Vying for a close second is Astoria, also known for being a halal hub. With a diversity of restaurants between 28th and Astoria, a true glimpse at the richness of the Muslim community in New York City can be seen.

Given that New Jersey is such a halal hub, it needed more than one feature on this top fourteen list. The other notable region to look at is central Jersey, which is a mix of Indo-Pakistani, Afghani and Arab residents, clumped in different towns. “On the weekend,” Sarmast said, “everyone goes to weekend buffet restaurants.” Where there are strong cultural populations, there can always be found delicious cuisine developments, and Jersey is no stranger to this phenomenon. Although there are not found specific hubs of cuisine, notable restaurants can be found nonetheless.

If you really want to try out a famous Philly cheesesteak, there is no other place to go than the original source. Shaped by the city’s mixtures of ethnicities, available foodstuffs and history, it is an icon to the city. Invented in the 1930s, the soft bread filled with an indulgent mix of beef and gooey cheese is a longstanding foodie favorite in Philadelphia, and a halal scene has finally caught up and begun creating their own delectable versions of the food. The economic and cultural center of Delaware Valley, Philadelphia is home to over six million people and the country’s sixth largest metropolitan area.

Although it’s well known as the capital of America, complete with government buildings and national museums, what’s less known is the wholesome, filling and vibrant halal food scene that thrives off of its loyal customers. Amanullah spilled about the most famous restaurant in the area: Ben’s Chili Bowl. “Ben’s Chili Bowl is a restaurant in the African American area of the city, straight up salt of the earth. The most famous dish there is the half-smoked, half pork, half beef sausage – but the interesting thing is the founder of 60 years, Ben Ali, never once ate the dish, because he’s Muslim. When he passed away, the city gave him a hero’s funeral – the restaurant is really one of a kind.” Compared to northern VA, DC is predominantly African American in cuisine.

Another halal hub that falls in the more unconventional category, Atlanta is well known for its halal food not simply because of the quality but because, according to Amanullah, “it’s very big on American food and less on immigrant food.” One of the South’s largest cities, Atlanta has a flare for the arts that allows its visitors and residents the opportunity to develop their creative taste – and then the opportunity to satisfy their more traditional culinary taste. The Muslim community in Atlanta is fully integrated and engaged in the state, with community life being expressed in areas of education, entrepreneurship, civic involvement, and interfaith. It’s no surprise, then, to see the array of predominantly American halal cuisine options, with “highlights in seafood and soulfood cooking,” Amanullah said.

The most populous metropolis in the Southeastern United States after Washington, DC, Miami is nicknamed the “Capital of Latin America,” as the largest US city with a Spanish-speaking majority. It is only natural, then, that the halal food scene is “influenced by the proximity to Cuban cultures,” as Amanullah said, “creating a new kind of taste, Afrocaribbean halal.” With the Muslim community in Miami representing cultures and backgrounds from around the world, including a significant Hispanic population, the food is “pretty diverse in terms of offerings.” This is the place to find something with a little Latin flair, and not feel like you’re struggling to discover it.

Laila Alawa is the Social Media Associate at Unity Productions Foundation; and a Public Policy & Government Intern at the Muslim Public Affairs Council. She is also the founder & editor of ComingofFaith.com