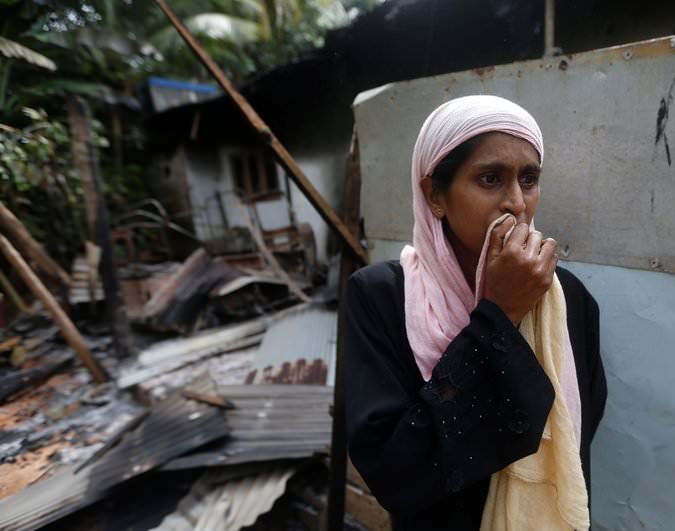 Riots broke out in the coastal Sri Lankan town of Aluthgama yesterday in an escalation of Muslim targeted violence that many Sri Lankans fear would intensify into a resemblance of the incidents of Black July – the anti-Tamil lawlessness of July 1983 which was said to have ignited the fire for the onset of the 3 decade-long civil war.

Muslim Matters has been consistently reporting (see here and here) this escalation of anti-Muslim sentiment on an otherwise charming island, and the events of yesterday are undoubtedly the worst in post-Independence history.

Although there is greater context to the story, this pogrom in itself is known to have been triggered by a small altercation a few days ago between a Muslim motorist and the driver of a Buddhist monk. While the situation was known to have been resolved at the time, a group of militant Buddhist monks who operate under the label “Bodu Bala Sena” (Buddhist Power Force) organised a hate-rally and procession on Monday in order to gain maximum mileage from the incident. Curfews were imposed in Aluthgama and the neighbouring town of Beruwela in an attempt to keep communal tensions at a minimum. Clashes resulted irrespective, subsequently leading to many Muslim-owned shops being torched and homes attacked. There have been reports of sporadic violence against Muslim businesses across the country since.

There have been many unverified images and inaccurate reports coming out of social media as a result of a deafening silence from the local media. Official figures from international media outlets like the BBC and the New York Times however, have confirmed an official figure of at least 3 fatalities and an approximate of 78 casualties.

Thankfully, the Muslims in Sri Lanka, though provoked in many an instance (albeit less severe) before this, have not resorted to reactionary violence. For what remains undisputed is that the majority of non-Muslims on the island are supportive of their plight. In fact, many Sinhalese have actively sought to protect their Muslim counterparts, either by speaking out against this unwarranted bigotry or even sheltering them in their homes. It must also be mentioned that in instances where attempts to distribute aid have been made, the bulk of contributions have poured in from those of other faiths.

For as is often the norm in matters of interfaith conflict, this too is a case of religious mis-representation, where the religious edicts of Buddhism in its unadulterated, non-violent form have been misappropriated by a malicious few. The majority of Muslims are aware that these affronts are not representative of the Sinhala majority, but of a handful of hardliners that function on the fuel of blind hate, as proven by the vile rhetoric spewed by the ringleader of this terror-inciting operation in a rally prior to the procession.

What is a matter of throbbing concern however, is that previous attacks by the Bodu Bala Sena have gone unpunished, and that hard-line monks have been able to operate undeterred with what appears to be legal impunity. Security forces which were deployed in order to control the situation were as ineffective as the gossamer tweets from the President (who is currently out of the country)in response to the clashes. There is yet no official statement from the government.

Having said that, it must be pointed out that the Muslims in Sri Lanka are no Rohingya. The administrators of violence in both terrains don saffron garb of a most extreme hue, yes, and in that alone can a comparison can be made. Firstly, the Muslim community in Sri Lanka (10% of the population) have been long integrated into the intellectual, communal and political spheres contributing towards the country’s development. Secondly, the recent spate of clashes have not been a targeted bloodbath of mass proportions, nor an exodus of a similar severity as that of the situation of this ethnic group of Burmese Muslims.

For fear of passions heightening however, masajid across the country have been urging Muslim communities to practise restraint during this particular time of provocation. Allowing emotions to get out of hand can go woefully awry and only the sound reputation of peaceful coexistence between Muslims and the Sinhala majority that has prevailed on the island for more than a millennia, serves to suffer as collateral damage.

These attacks are a test for the Muslims of Sri Lanka, and we can only pray for their patience and protection, for the guidance of their oppressors, and that Allah allows these trials to serve as a means of purification.

Iraq Crisis | From an Arab Spring to a Desert of Desperation