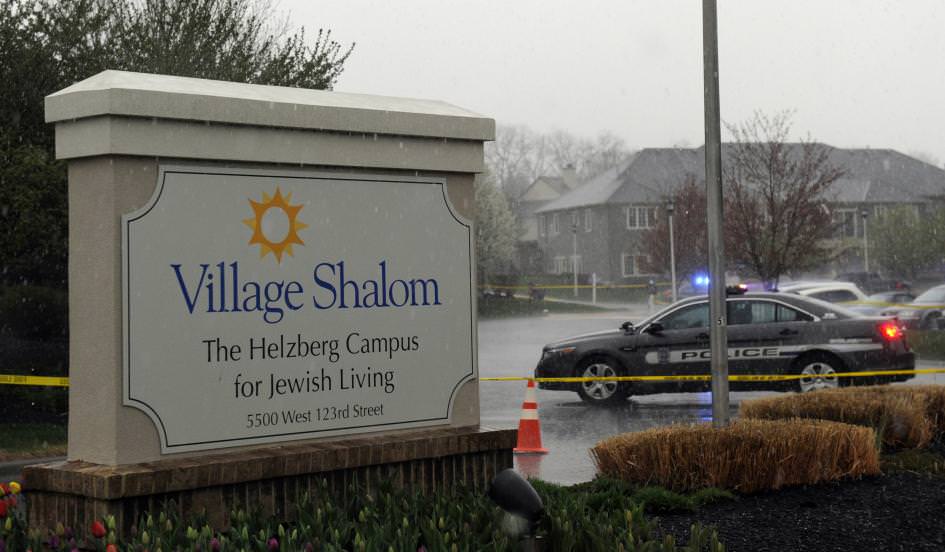 So a 73 year old KKK member has just gone on a shooting spree in Kansas, killing three people.  He specifically targeted people of the Jewish faith.  For every Muslim who condemns the killings and extends their sympathies to the Jewish community, expect to be asked, “But what about Palestine?” Because now that the shooting has stopped, let the shame grenading begin. 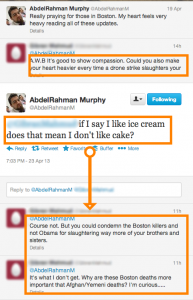 This kind of thing happens pretty much any time a Muslim expresses sympathy or concern for death or oppression of anyone other than Muslims.

“You want us to pray for Boston? How can you condemn the Boston Bombers but not Obama? He’s killed hundreds of thousands more than they have!”

“I should care if Buddhists are oppressed in Tibet? Yeah, look what they’re doing in Burma! They’re burning Muslims alive!”

“Why are you making all this fuss about animals  being raped in European brothels? Don’t you care what they’re doing to your Muslim sisters?  Are animal rights more important than women’s rights?”

When Shaykh Omar Suleiman expressed condolences and support of the Jewish community, suggesting that Muslims in the US do the same- it took less than four hours for someone to pull the pin on a classic shame grenade and lob it in his general direction. 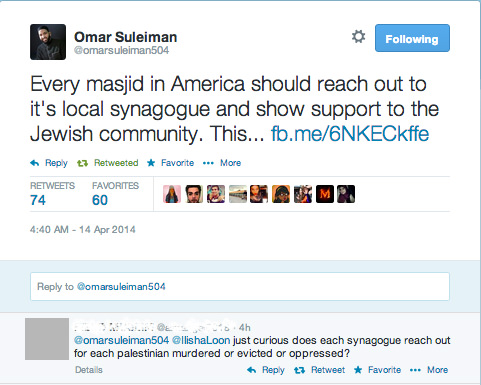 The short answer is no, of course they don’t.  But this isn’t about Muslims or Jews or Palestine, this is about justice, and sympathy.  And pie.

You know pie? Warm, flaky crust, sweet gooey center? Everyone loves pie.  Some people though, think there’s not enough pie for everyone, and that’s what we call a scarcity mindset.  People with scarcity mindsets spend unnecessary time and energy trying to defend their pie from others, because as far as they’re concerned, there are 6.2 billion people in this world and only one tasty piece of Mom’s Own Ole Fashioned Justice and Sympathy Pie.

In a world with never enough, they’re trying to do their part to make sure Muslims get a fair share of Justice and Sympathy Pie.  Here’s the thing though- everyone deserves a piece of pie, and Allah made enough to go around. In fact, He commanded us to share the Justice and Sympathy (pie) with everyone, regardless of their religion.  Islam is not a religion of scarcity, it is a message of abundance. 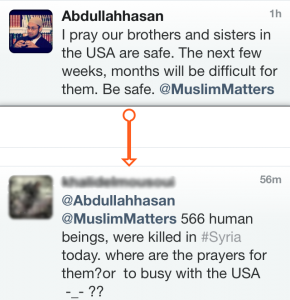 Too busy to pray for Syrian Muslims- because there’s only one piece of Prayer Pie, and you’re giving it US Muslims instead? Wow, Muslims even fight each other for pie!

An abundance mindset says that Allah made enough Justice and Sympathy pie to go around, and we can share it with people of all religions without insinuating that Muslims don’t deserve any or taking away from anyone else’s fair share.  But then, the people targeted in the Kansas shooting were Jewish, and if our interfaith relationship were on Facebook, we’d say it’s complicated

We all like a good story, but we only like the simple ones.  We like  good vs evil, light vs dark, hobbits vs trolls narratives that fit neatly into little boxes so we know who to root for and how it should end.  The media knows this, and so pro-Zionist media outlets have woven a fairytale of good people trying to go home and the freedom-hating Muslims who hate them.

It’s a narrative that has served their interests well, and given how little exposure most Americans have to unbiased international media coverage, it’s no surprise that many of them believe it.  That sad thing is, many Muslims believe it too, and we turn Us vs. Them into Them vs. Us, heaping all Jews- of all races, nationalities, and political inclinations- into one big pile of evil.  And then, we pour scorn on it.

The Red Pill or The Blue Pill? 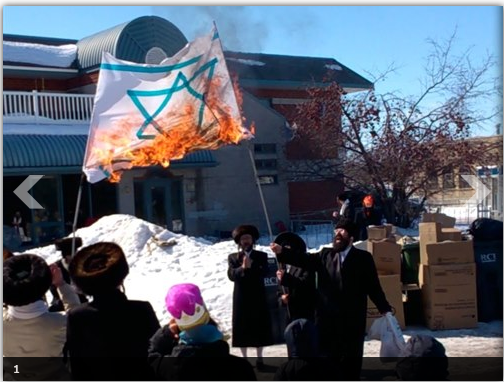 Annual Israeli flag burning for Purim. And you thought all they had was Hanukkah! http://www.nkusa.org/What if I told you that Judaism and Zionism are not the same thing- and that one is a religion, but the other is a nationalist identity?

What if I told you that not every Jew was Zionist, and that many very orthodox and very bearded Jewish men are flag-burningly angry about Israel’s very existence?

What if I told you that not every Israeli was pro-occupation, and many face jail time and persecution for refusing to serve in the occupation?

There are some people who would be shocked—shocked I say!—to find out that not every Muslim is a terrorist, and that Islam is a religion, but terrorism is a political tactic used by immoral people of all religions.

You could tell them that not every orthodox Muslim is an extremist, and that lots of very orthodox, very bearded Muslims are hopping mad about Muslim-led evils that have no basis in Islam.

You could go blue in the face trying to tell them that you can’t profile, hate, and discriminate against the entire Muslim community just because we’ve got loonies on our fringes too.  But they might not believe it, the same way you might read all of this and still believe that Jews in general deserve the type of spite that some Muslims feel is justified by the morally reprehensible occupation of Palestine.

Palestine is a prisoner of Zionism, not Judaism.  The rape, killing, torture, and starvation there is a function of politics more so than religion- and while religion is at the foundation of Zionism, it’s haphazardly tacked on what is, essentially, a power grab.  While some  Jews are vehemently opposed to Israel’s very existence, others carve up Palestinian homes to create the casinos, night clubs, and nude beaches that attract international tourists to the errrr.. Holy Land.  Both groups are Jewish; only one group is Zionist.

No one’s calling the shooter a terrorist- because crazy people who kill people are only terrorists if they’re Muslim—but just because other people have double standards doesn’t mean it’s OK for Muslims to have them too.  So let’s be fair, because everyone deserves their piece of Sympathy and Justice pie.

“‘O ye who believe! Be ye staunch in justice, witnesses for Allah, even though it be against yourselves or (your) parents or (your) kindred, whether (the case be of) a rich man or a poor man, for Allah is nearer unto both (them ye are). So follow not passion lest ye lapse (from truth) and if ye lapse or fall away, then lo! Allah is ever Informed of what ye do. Surah An-Nisa (4:135)

Now, back to Kansas.  In case you’re wondering what the connection between Justice and Jew-hating is here, think of this; a man shot and killed innocent people.  Justice dictates that he be tried and punished, and the victims consoled, compensated, and cared for.  If your opinion on what the victims are entitled to changes if they’re not Muslim, then you’re missing the plot.

When Allah revealed this verse in Surah Al-Anbiya, verse 107, he said mercy to mankind– not mercy to Muslims only.  The Message of the Prophet Muhammad—of compassion, of gentleness, of justice—is for everyone.

If yesterday in Kansas, Frazier Cross went hunting for Muslims, you’d be shouting for justice- but  justice isn’t only for Muslims.  A Jewish victim deserves as much sympathy and compassion as a Muslim does, and showing the Jewish community support for their loss doesn’t mean you’re two-timing the Muslim community.  It means you are being a good global neighbor— just as Allah told you to be.

Is there tension between the Muslim and Jewish community because of what Zionists—both Jewish and Christian— are doing to Palestine? Absolutely.  But should that stop us from taking care of our Jewish neighbors?  Let’s ask Allah!

“Allah does not forbid you respecting those who have not made war against you on account of (your) religion, and have not driven you forth from your homes, that you show them kindness and deal with them justly; surely Allah loves the doers of justice.”  The Qur’an, Surah 60, verse 8

If you’re still not sure if you agree with me, or if you think that perhaps, you’d like a more… orthodox opinion on what a Muslim should do when a Jewish neighbor dies, here you go:

A funeral passed by the Messenger of Allah, peace and blessings be upon him, and he stood up. It was said to him, “It is a Jew.” So the Prophet said, “Was he not a soul?”  Source: Sahih Bukhari 1250, Sahih Muslim 961

If you think you know better than God, His Messenger, or common sense, then by all means- continue to believe that all Jews deserve the full scorn earned by Zionism.  If you think that Allah is somehow limited in His Mercy, Compassion, or Omnipotence in aiding those in pain or in need, then go ahead and pray for only one group of people, since you think Allah can’t provide enough Justice and Sympathy pie to go around.

If you realize though, that no soul should bear the burden of another, and that you can’t hate all Jews any more than they should hate all Muslims, then please follow Omar Suleiman’s very sage advice, and contact your local Jewish community center today.  Hate is a vicious cycle—from one Abrahamic faith to another—and only by breaking the cycle and extending a gesture of support to our Jewish neighbors can we begin to exemplify what being Muslim really means.

I fully condemn, in the harshest of words possible on a respectable public blog—the occupation of Palestine and the oppression, bombing and murder of Muslims around the world by people of ALL religions, or the lack thereof.  It’s sad I have to write this, but I’m sure someone’s going to skim through here, scroll to comments section  and start doing exactly what I am advocating against—which is to say that by having sympathy for anyone who is not Muslim, I do not have sympathy for Muslims; or that feeling sorry for a Jew after all they’ve done to Muslims is to invalidate the massive scale of evil in Palestine.  So I’m going to say it again, but this time in bullets points so you don’t get to go TLDR on me.