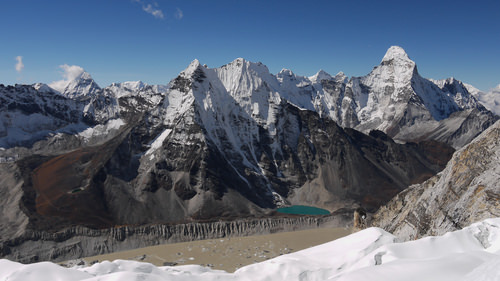 Humaira was among one of the first three women, along with Freshta Ahmadzai and Dalal Dahrouj, who undertook Islamic Relief Canada’s first international challenge to climb Mount Everest Base Camp. The team met with the Islamic Relief UK team in Nepal and started the trek of 12 days. In order to par-take the challenge, the Canadian team had to raise $5500 for a charity project of their choice – in this case, orphan sponsorship. This was in addition to the cost of the trip. Both the Canadian and the UK Islamic Relief teams were successful in their challenge.

My trip to Nepal to trek up to Mount Everest Base Camp (EBC) bloomed out of an accidental click of a mouse that led me to Islamic Relief (IR) Canada’s ‘Challenges’ page.  From the age of 15, I had taken it upon myself to raise funds for orphans through various sponsorships from family and friends. This happened on an annual basis. In the first year, I started off by raising just enough money to sponsor one orphan, and currently have been able to collect enough to sponsor up to four orphans, alhamdulillah.

It wasn’t until June 2013 that I came across IR’s EBC challenge. I made my decision within minutes; I was going to take part in an adventure of a lifetime! EBC was the first international challenge I had undertaken and there was a lot I had to prepare for. From reading and watching videos from previous trekkers, physical training, shopping for the right clothing and equipment, it was all very exciting and motivating.

On the plane en route to Nepal, I was still unsure of my expectations from this trip despite of all the preparations. I did not know what Nepal would be like, what challenges I would face and whether I would overcome them. Most importantly, I repeatedly pondered on a question: why was I one of the selected few destined to go on this adventure? I am still not entirely sure of the answer. I figured that it was one of the pieces from the bigger puzzle of my life.

Whilst this article may briefly take you through my journey to EBC, it will not do justice to the reality of the challenges and the endless beauty of the Himalayas. This trip was not like any other vacation. It was one that tested our endurance and challenged us physically, mentally, emotionally and spiritually. The entire trip lasted sixteen days, with twelve days of continuous trekking.

Prior to the trek, I was afraid of the physical challenges that I would face. The worst was my body not being able to handle it. However, I found that it was not my body that needed motivation, it was my mind. Despite getting tired and feeling the occasional pains, my body was able to handle it. The power of constant prayers, the tips from previous climbers and the contagious spirit of the team kept me going. I recollect one of the hardest days, a long and steep trek in which I became exhausted immensely. I came to realize that I was one of the selected few given a chance by Allāh

to actually be here; among his beautiful creation. I felt so privileged that I could not bring myself to complain.

The EBC challenge has put my life into a perspective. The weather was very cold, especially during the nights with little to no humidity. Due to lack of moisture, our skin was dehydrated and resulted in flaky and chapped skin. Furthermore, with this cold and dry weather, we developed nosebleeds and dry coughs, not to forget headaches and altitude symptoms. The lodge’s main room consisted of a bukhari heater, typically a wood burning stove.  We spent most of our time in this heated room – eating, relaxing, reading, praying, writing journals, playing cards, shared with fifteen to twenty people including our Sherpa’s (Nepalese mountain guides) and other guests. The fire was only lit for breakfast and after sunset, mainly because wood was scarce at higher altitudes, thus, being expensive and had to be used sparingly.

The bedrooms were shared between two people and mainly used for sleeping – it was too cold to spend more time than required in there. If a bottle of water was left by the window at night, by the early hours of dawn, it would be frozen. Alhumdulillah, the lodge staff and the sherpas worked diligently to keep us warm at night, and provided us with hot water bottles, which we kept inside our sleeping bags, along with the clothes we were to wear for the following day. Due to poor water sanitation, our drinking water had to be boiled. Alternatively, we could purchase bottled water, which again became expensive the higher up we stayed. Our food options were very decent; however, with twelve days of trekking, these options became repetitive. Again, constant motivation and reminders to one another about how little others have made it all the more enjoyable.

Despite having read about altitude sickness, I did not anticipate it to be so ruthless.  At over 4000 m, altitude sickness kicked in and I developed a headache, feelings of nausea, and my appetite began decreasing. This episode only occurred one other time, when we hit 5000 m, but alhamdulillah, it was not as bad as it could have been. Even though many of us took Diamox tablets (to relieve altitude symptoms), “thin air” can be a very scary sight! Many a times, during a steep hike or during the night, I would start gasping for air.  I had to force my mind to rest and remind myself to focus on taking slow deep breaths. It was a game of mind over matter.

The most energizing and beautiful part of the trip had to be praying in congregation and taking turns in sharing daily reminders after Maghrib/Isha prayers. Secondly, the quality time spent with the team before and after meals – sharing stories, jokes, and playing cards. The team, each member with their strengths, was truly a blessing.

All in all, the EBC trek was a challenge of a lifetime. Not only has Everest raised my threshold and opened my eyes to the world beyond our everyday life, it has shown me the need to remind ourselves to think, act, and react with a broader perspective in mind. This trek widened my horizons beyond anything I could have ever imagined.

My next challenge? It has to be Mount Kilimanjaro (Tanzania) in 2015, inshaAllāh.

If you are moved by the suffering around the world and would like to help, select a challenge that sparks your interest from among Islamic Relief’s local and international challenges.  If challenges are not your cup of tea, then you can always donate towards the various projects on the Islamic Relief website.

Chick here to contribute to Humaira’s next challenge, Kilimanjaro 2015.

What’s The Matter? | Teen with Friends of the Opposite Gender

The Trials of Ease – Reflections of a Forehead Well-Traveled