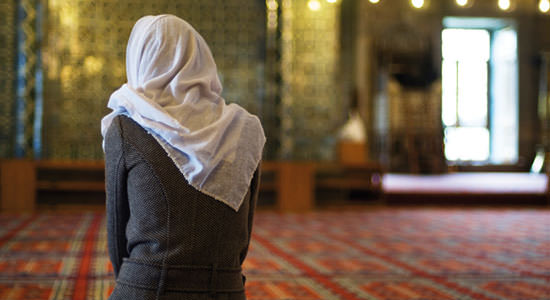 In Ramaḍān, from the balcony of my flat in the United Arab Emirates, I can hear the boom of a cannon fired from a few kilometres away signalling the end of a day’s fast. Following immediately is the call to the Maghrib prayer – 3 different adhāns in fact, from the 3 masjids within the vicinity of my home, blending synchronously (and sometimes not so much) each with the other. For those of us in the Middle East, we don’t often consider ourselves fortunate, taking for granting the many liberties associated with living in a Muslim majority part of the world. “The heat is unbearable!” we complain, “and the summer days far too long!’”

We forget that during Ramaḍān, our working hours are shortened by law, so that we can take the rest of the day to recuperate, break fast with family, and spend time in worship. It slips our minds that food establishments have been instructed to open for business only the hour of Iftar onwards, and those that are operational during the daylight hours, have to serve non-fasting customers behind a screen, so that devotees aren’t tempted. Irrespective of when we’re fasting we forget, too, that wherever we are, and at any part of the day, we will be within distance of a designated prayer area, be it a full-blown state-funded mosque or a carpeted prayer room in a shopping centre (some particularly large malls accommodating more than one). The sight of a veiled woman is far from an anomaly, as is the casual drop of Insha’Allah in conversations between Muslims and non-Muslims alike.

Up until last year I considered myself fortunate for all of the above. Hearing of the hardships my Muslim comrades in the West and the other parts of the Muslim-minority world would have to face solely for choosing to practice their faith made me feel all the more grateful, and subsequently increasingly concerned for their state of affairs.

I have always been an advocate for travel. Never for the sole sake of satiating an empty desire to stake claim to conversation, but primarily for the learning experience packed into the luggage along with the other souvenirs. The history, the culture, and more importantly, the true appreciation for a people through the exposition of their way of life.

This was however, my first trip to North America, and family packed me off with many a warning, and too frequent a spattering of the words airport security and Islamophobia. Thankfully – to the disappointment of some exhibitionists I know – I have no ‘stories’ to report from JFK, and the good citizens of New York have been nothing short of hospitable.

Even if they weren’t, I was too preoccupied with other quandaries to notice.

I would forget (as I always seem to when I travel abroad) that I’d have to question everything edible that had me drooling on sight for either alcohol, swine, or non-zabiha flesh content. Oh, parting is such sweet sorrow!
Though armed with the advantage of the traveler’s shortened prayer card, in very nearly forgetting my ṣalāh, I realized how much I take for granted the audible reminder of the adhān I’d grown accustomed to. But most infuriatingly, I found myself grappling with the experience of always being miles away from the comforting convenience of a prayer spot just around the corner; my only option instead being to spread out a borrowed travel prayer rug and pray – around the corner, yes – but at the most discreet nook at the bend of a crowded walkway. Only twice during my 6-day stay in the city did I find the closest semblance to a place of prayer, and those too only because I actively sought them out: The Islamic Society of Mid-Manhattan was a slightly humble affair (for no fault of their own) that I nearly missed if not for the green awning and crescent demarcating it from the other building facades. The elevators had been switched off temporarily as they needed to save electricity, and although exemplarily clean, the wear-and-tear was blatant – and this made my heart ache.

The Islamic Cultural Center of New York on the other hand, was a more respectable edifice – and obviously better financed – and the only structure I had encountered that actually resembled a mosque: dome, minarets, et al., which had me, a Middle Easterner, uttering in pleasant surprise, “Oh my word. A proper masjid!”

So for the rest of my sojourn in the Big Apple, my forehead was introduced – through my friend’s thin travel rug – to the marble tiles at the MET, the plush stairwell of the Bergdorf Goodman on 5th Ave, the faux-bricks by a beatnik art gallery in Chelsea Market, and an apartment in Times Square (among others). Rest assured, I returned with a most well-traveled brow.

This trip in particular was an eye-opener. I came to realize first-hand how challenging it can be for some, to fulfill the very basics of worship. And although I am grateful to be home to my halal steaks and pork gelatin – free gummy sweets, I found myself no longer sympathetic, but dare I say it, rather envious instead.

Envious because I now feel I’m not being tested half as harshly, having only briefly experienced the struggle of mettle that my brethren in the States are privy to every single day. Jealous that I may not be receiving as bountiful a reward for not having to stave off my stomach juices a few more minutes just so that I can make it to the halal pizza guy. Absolutely green even, that I’m not being challenged with having to rely solely on my biological alarm, with no symbolic physical reminder in sight, but on the (very) audible call(s) to prayer summoning me to worship.
Perhaps I come across as being ungrateful, and maybe even as trivializing a circumstance that is in fact very real, but I’ve now come to realize the significance of this verse, and that too in a new light:

You will surely be tested in your possessions and in yourselves. [Surah Ale-Imran; 186]

Where the possessions in this instance refer to the ‘wealth’ of ease, the comfort of plenty positing the ready ‘availability’ of Islam. So much so that more often than not, this affluence of the den – as expressed in Muslim majority nations – teeters more towards it resulting in a cultural obligation rather than a spiritual endeavor.

Where women don the abaya for reasons pertaining to societal pressure as opposed to true devotion. Where men hurry to the masjid just because ‘it’s there.’ Where there is very limited empathy towards having to fight the urge to dig into an alcohol-laced dessert, or having to endure abdominal moaning and the involuntary salivation of true temptation while fasting.

This test of wealth and comfort warns of a faith so easily practiced that it becomes mundane. Where every act becomes robotic instead of a cause for reflection. A risk of devaluation, as is with a designer bag when its non-exclusivity is exposed.

Perhaps it’s time we Muslims in the Middle East probe a little deeper into the many ‘trials’ we take for granted, and renew all acts of our Ibadan as though in the shoes of someone from whom these luxuries are withheld. Would we keep up this pace if our roles were reversed? Would we strive to represent?

Indeed there is such a thing as the trial of ease; a trial – dare I say – potentially as arduous as the trials of hardship.

My Journey into the Himalayas: A Game of Mind Over Matter