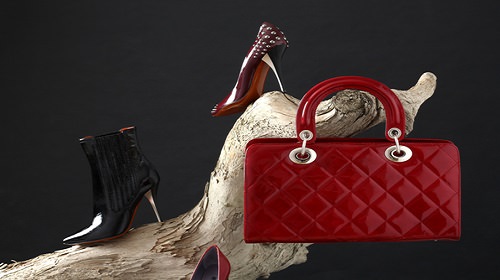 Rows of colorful handbags repose ostensibly on shelves and display tables around me. They boast of their structured silhouettes and textured leathers: boarskin, saffiano, patent. But these aren’t just any handbags. Carefully embossed in the center in glossy patent black or lined in gold, the words of the designer brand catch the eye of even the most timid shopper.

The brand, a high-end fashion company and daughter of Fifth and Pacific Companies, Inc., a multi-billion dollar global corporation, caters to the world’s sophisticated elite. Handbags, accessories, and clothing are specially designed for a particular type of woman: the career woman on a mission who gracefully flags down taxis and makes important business meetings just in the nick of time – all while modeling the latest haute couture and thousand dollar handbag. She is fun, playful, and smart. But most importantly, she is rich.

This fashion house, like any other global brand, capitalizes on our naivety – our false belief that somehow a glamorous new handbag can solve our problems. Worse yet, it fools real working class Americans into thinking that they too, can be worth a million dollars. You can be a celebrity so long as you acquire this superfluous material item most likely manufactured in China for a fraction of American minimum wage yet sold at the price of an average car payment. The shattering reality, however, carries deep social ramifications.

Last year, I lived abroad in Egypt where I studied Arabic at Alexandria University. When I returned to the States, I began the tedious process of applying to jobs. Egypt – where socioeconomic problems run rampant and a large portion of society visibly lives below the poverty line – had rendered me disillusioned with modernity and materialism. So one can imagine what a painful process it was to go from life in a developing country to the shiny interior of a wealthy corporation. I became a temporary employee at the company to make as one of my co-workers thoughtfully put it “fun money,” while I pursued other more long-term enterprises.

I began work, detached and aloof yet resolute in my antipathy towards consumer culture. I hated the slew of handbags and their patina of false promises. I observed as customers attempted to trade in their personal problems for a new designer purse. One woman confabulated with me about a death in the family. She had recently come into money and decided to treat herself. Another woman also lamented over the loss of a family member. This evidently prompted a shopping spree. She bought four purses and a wallet and seemingly trying to justify her lavish expenditure, stated matter-of-factly, “I needed retail therapy.”

My co-workers and managers, puppets of a deceitful corporate puppeteer, cautiously pick up various handbags in the store, and as if children, cradle them longingly. Every particular purse has a name. Eerily, they are treated like animate objects, virtually assuming human value.

“I love this little guy,” my co-worker says, eyeing a pebbled cowhide neon green purse. “Little Curtis is my faaavorite” Another popular piece, the “Beau Bag” or “boyfriend” bag replaces the need for male companionship. It is, according to the official fashion brand’s website, “the ideal companion to tote around town.”

Sales associates, like at most corporate companies, are paid minimally with little health benefits. Pressured into buying product, as the company demands that employees model the name brand at work, associates find their already meager paychecks further diminished. Duped by the illusion that employee discounts actually save them money, they end up spending more in the long run. One manager, a young dainty single mother, struggles to make ends meet every month. Although she works full-time, managing unseemly hours and forsaking invaluable time with her three-year old daughter, she complains mournfully of having to eat ramen noodles for dinner. As American social critic, Chris Hedges contends in his book, Empire of Illusion: The End of Literacy and the Triumph of Spectacle:

The wild pursuit of status and wealth has destroyed our souls and our economy. Families live in sprawling mansions financed with mortgages they can no longer repay. Consumers recklessly rang up Coach handbags and Manolo Blahnik shoes on credit cards because they seemed to confer a sense of identity and merit. Our favorite hobby, besides television, used to be, until reality hit us like a tsunami, shopping. Shopping used to be the compensation for spending five days a week in tiny cubicles. American workers are ground down by corporations that have disempowered them, used them, and have now discarded them.

In an age of capitalist fantasy and materialism, Hedges words ring painfully true. The upshot is unavoidable. Societal ills are tempered with and all together forgotten for a beguiling fantasy world that aims to encroach upon even the most fervent iconoclasts. Sheikh Abdal Hakim Murad also preaches against materialism. In a scholarly essay, he notes, “when we forget who we are, so radically, the protection begins to be withdrawn, and we are at the mercy of the material world, which we now trust and love more than we trust and love God.”

That God should become secondary to our materialistic pursuits is a very real scare. We see it happening in our local Muslim communities. Muslim families compete over luxurious homes and fancy cars. Intrinsic value is measured monetarily by occupation and financial status rather than moral and spiritual conduct. Allah warns against this precarious state in surah Al-Takathur, “Competition in [worldly] increase diverts you. Until you visit the graveyards.” The reality – cold and difficult to swallow – reminds us that all trivial pursuits end in permanent privation. The middle path, however, can be hard to find.

Lately I’ve nurtured a radical desire to withdraw from the modern world, and become somewhat of an ascetic. Although many of my friends candidly pointed out severe flaws in this plan, I still struggle to maintain a balance between love of this world and love of the next. Shamefully I must admit that, despite all my attempts in resisting the urge, I am not immune to the sparkly consumer allure of this fashion house. I purchased my first leather handbag a few weeks ago. I can’t say that I’m any happier than I was before. But I can say with every certainty, that money would have been better spent elsewhere. In the future, it might do well for me as well as everyone else battling the pathology of consumer culture to remember the beautiful adage attributed to the prophet Jesus:

“The world is a bridge; so pass over it to the next world, but do not try to build on it.”