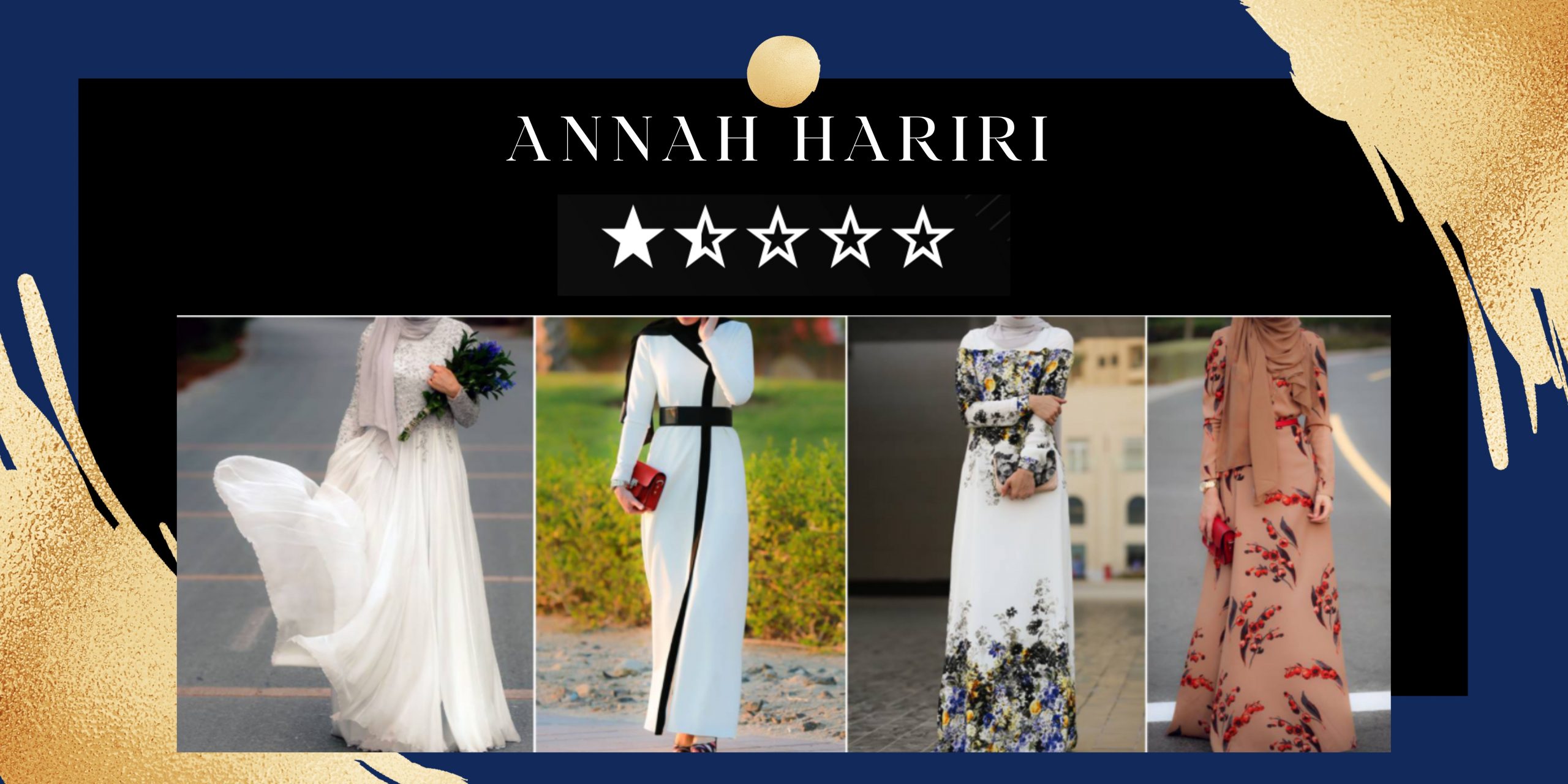 Amina Kapiat, a New York resident, was forgiving when Turkey-based modest fashion company Annah Hariri said her $200 order would be delayed by a few weeks.

But when weeks turned into a little over a year-and-a-half of delays, Kapiat started to ask questions. She heard nothing.

Like Kapiat, hundreds of customers around the world — particularly in the United Kingdom and United States — say they have not received orders from a company that markets itself as fair trade and an ethical  alternative to fast fashion.

In some cases, refunds on items — which have an average cost of $100 — were requested and never received.

“No dresses. No money. No response,” a customer who spent $700 on an order, told MuslimMatters. 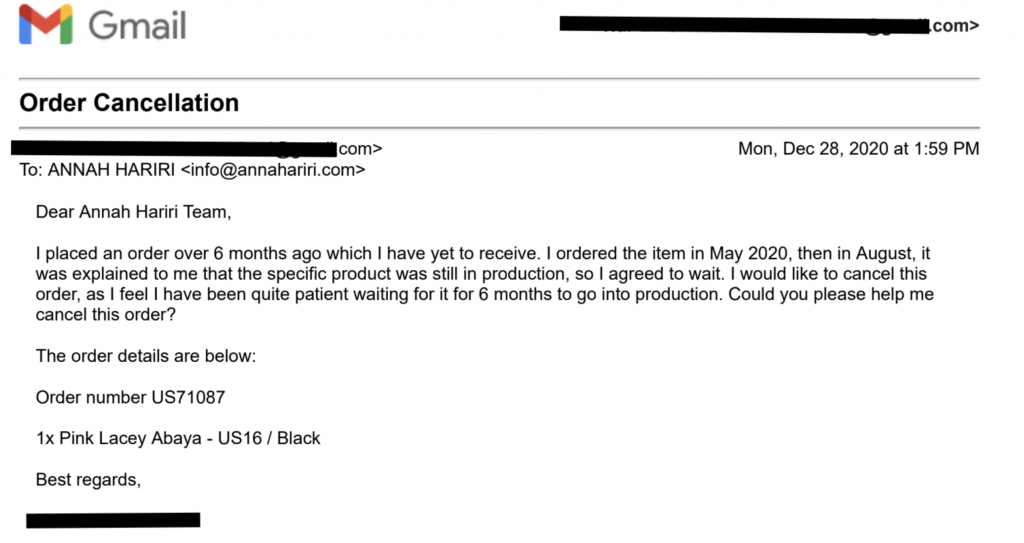 The company was founded by Annah Hariri and her husband in 2012. Hariri, a convert of Eastern European descent, turned a dress-making hobby into a business with orders across the globe. The company also employs 150 refugees on its 300-member staff roster.

The issue has emulsified from a seemingly small subset of customers to a growing number of issues. The Turkish Embassy in London has been fielding some complaints — some of which were resolved when the embassy contacted the company.

Annah Hariri did not respond to multiple requests for comment from MuslimMatters on the issue. A former employee who asked to remain anonymous said issues caused by the pandemic have been resolved, but customer complaints suggest otherwise.

Nearly 2,000 unsatisfied customers from around the world formed a Facebook group chronicling a familiar narrative: Orders placed up to two years ago went unfulfilled. Despite reassurances from customer service that the order would arrive and was simply delayed to the COVID-19 pandemic, orders were marked as fulfilled or simply not delivered. 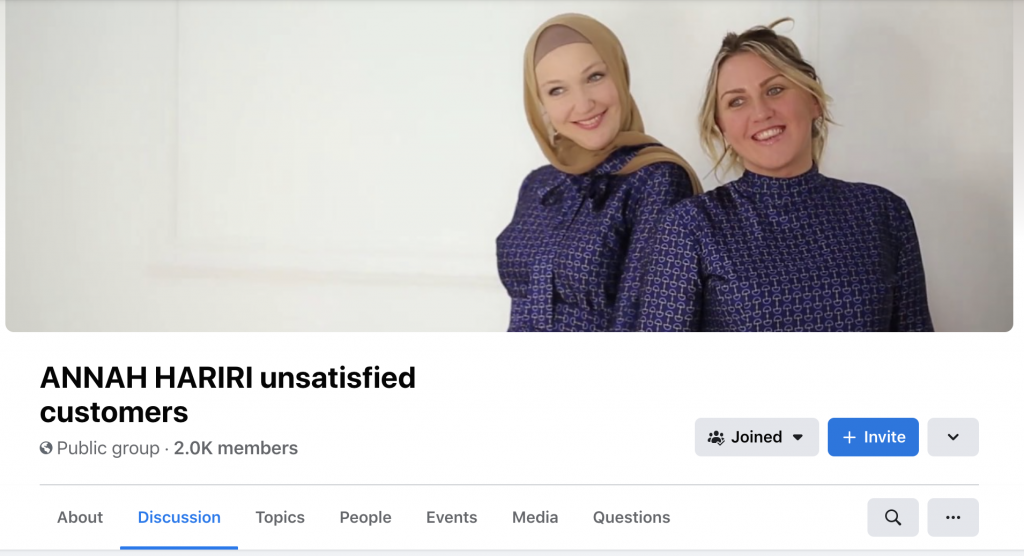 When issues first started in March of 2020, some customers like Samia Ali empathized with the company — which says it values fair trade and slow fashion — and agreed to wait for orders.

Ali, a New Mexico based social media influencer, continued to support the company publicly on her social media platforms, assuming that her order was taking time because of business woes that deserved some sympathy.

But when her order remained incomplete for more than a year, Ali said she notified her followers about long standing issues with the company.

“Unfortunately, due to continuous lies by Annah Hariri, me and hundreds of other women have lost hundreds of dollars. Annah Hariri continues to function as normal on social media platforms… I am disappointed, hurt and appalled by a company who continues to take advantage of vulnerable women without any protection from an entity that holds businesses responsible in the country,” she said.

Most credit card companies declined to offer refunds due to fraud because requests are made more than six months after the order is placed. Like Ali, customers waited too long to file a fraud claim with credit or debt issuers.

Some customers told MuslimMatters that they’ve been blocked from social media channels when they’ve called out the company for what they consider fraud.

As a result, customers are left with little to no avenues for respite.

Girls, don’t ever purchase anything from ANNAH HARIRI. Biggest scam, I ordered items almost a year ago and they have not even shipped them. I can’t even get a refund for my items or contact their customer service team.

In August 2020, founder Annah Hariri said that the pandemic disrupted the supply chain. She moved to a new factory in order to implement social distancing safely, her thread-supplier stopped operating for 20 days due to a rise on COVID-19 cases, and the company that dyes fabrics threatened to close due to a lack of orders, prompting Hariri to pump out more fabric for the dye company.

Each disruption resulted in a two-week delay.

At the time, Hariri said 8,000 orders remained unfulfilled. A company update from May says that a number of countries — excluding the U.S. and UK — are experiencing delays.

“I know guys that you are sad and disappointed because of delays and I feel you and that’s why I’m here giving more details,” Hariri said in a Facebook video in the summer of 2020.

Note from the editor-in-chief, 1/4/22 @ 5:30 pm EST: The linked Facebook video has been removed from the Annah Hariri Facebook page. A different video from November 2018 on YouTube explains the company’s order fulfillment process (pre-pandemic.)

She said she was unwilling to stop receiving orders in order to fill the back log because of the negative impact on her staff, particularly refugees.

“This is the time where I’m tested,” she said.

Since then, company representatives have offered a hodgepodge of reasons for continuing delays.

In April, the company said it was “fully back on track and working hard to fulfill all the pending orders.” Some customers received partial orders in the last three to five months.

Others have criticized the company for continuing to mount an aggressive social media campaign for  new dresses while orders remain unfulfilled.

Increasingly, more complaints from different countries are pouring in.

This Annah Hariri guy is not normal. Lati last year, no news, no delivery, nothing nothing. Na so so place your order before Eid I just dey see. Abeg how can I get my stuff from her?

The U.S. Federal Trade Commission encourages U.S. residents to report fraud or deception via its website.

“Speaking generally (and not about any particular company or entity) the FTC brings many cases every year against companies that it alleges have engaged in unfair or deceptive marketing and advertising,’ Peter Kaplan, the commission’s deputy director of public affairs told MuslimMatters.

Customers are encouraged to contact the commercial offices of Turkish embassies where the order is placed for assistance.

Other companies like Niswa Fashion, an Illinois-based modest fashion company, have also not been insulated by the pandemic, which has wreaked havoc on supply chains and brought businesses to the dust. Local USPS carriers have encountered significant delays.

A company representative for Niswa Fashion told MuslimMatters that despite challenges, the business prides itself in shipping timely orders and strong customer service that is responsive to all requests in a timely manner.

“We believe it’s important to try to notify and keep customers aware as much as possible and to respond to all inquiries so they are kept up to date about what is going on with their order for their assurance,” the representative said. “And that although a delay may happen, we’ll make sure to keep checking throughout the process as well.”

Speaking generally, Minnesota-based Shaykh Mohamed Hussein, who has expertise in Islamic finance and business affairs, noted that the Islamic principles of transactions should be maintained in good and bad times.

“The markets are cyclical but our principles cannot waiver. At core of these business practices is fulfilling our contracts and not causing harm. This includes hoarding in times of extreme need. If a business is structured in such a way that it  cannot fulfill its promises in trying times, the model requires review. Challenging circumstances do not permit us to violate our mutual rights” Hussein noted.

A countdown on the company’s homepage says a year-end sale ends in a few hours.

It resets the next day.

Don’t Give Up On That “Unanswered” Prayer

Fatimah Waseem is the editor of a hyperlocal website with Virginia-based startup ARLnow. Her work has appeared in USA Today, The Washington Post, The Baltimore Sun and other national outlets. She received her master's degree in public policy from Northwestern University in 2020 and graduated from the University of Maryland, College Park with degrees in journalism and government in 2015. She lives with her husband and two boys in Virginia.