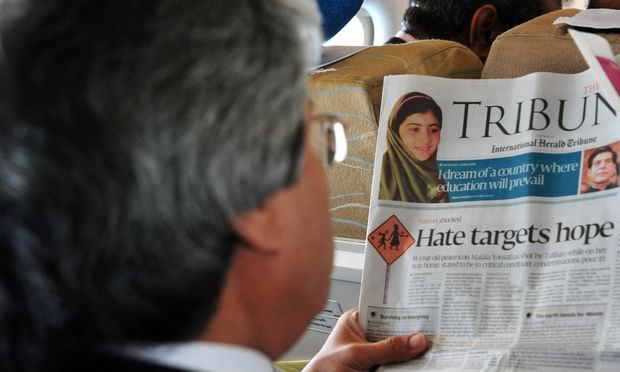 The cold, almost bitter response of Pakistanis towards Malala can be a bit puzzling. This reaction is not just from radical elements but also from the general populace. Explanations for this reaction have ranged from jealousy to conspiracy.

“The criticism is ostensibly about how Malala’s message has been used by “the West” for their own “nefarious” ends, but much of it is actually rooted in jealousy that a plucky teenager – a girl at that – has achieved more coverage and goodwill in her short life than her critics ever will.”

Of course, Kazi is part of a dubious organization consisting of illustrious anti-Muslim bigotry-enablers, so her support of Malala is actually a sort of reinforcement for the second explanation—that of conspiracy theories questioning the entire shooting episode, with Malala and her family being agents of the West. Thus, Sofia Ahmed on cue, “Tehmina and her ilk have one goal, and that is providing ideological support to the advancement of colonial interests and Western tyranny”

There is no doubt that some may harbor jealousy. In a country that is struggling to get on its feet, where poverty is widespread, seeing Malala’s family achieving fame and wealth can be a source of jealousy for some folks. There is also no doubt that conspiracy theorists are dime a dozen in Pakistan. Who can blame them? Especially considering the nation’s less than memorable experiences with the West, going from being “special allies” in the 1980s, to being forced to join the ill-fated “war on terror”, to becoming second fiddle to more special relationships with arch-rival India.

However, to simply dismiss the negativity as being just about jealousy and conspiracies is unhelpful. It ignores complex realities and reduces a nation to very low common denominators.

Instead, I believe that the more significant reason for the negative reaction is an impulse for a people to reject the imposition of “their” heroes upon “them”. In other words, a nation likes to make its own heroes and as soon as it is imposed upon it by a foreign party, the first and natural reaction is rejection.

Furthermore, Malala feeds into a very black and white world in Pakistan, of terrorists against good guys. She ignores the massive swathe of gray; that of terrorists among good guys and of good guys among terrorists. Consider the letter by a Taliban leader to Malala. While despicable in many parts, it does paint a more complex picture of the ground-reality and question the basic premise of the “Taliban against girls’ education” hype.

Another facet of this complex story is that Malala doesn’t talk about drones (her recent meeting with President Obama was a rare occasion where she spoke about drones strikes), and about the other countless injustices in Pakistan against women. Her one-track diatribes are like music to the ears of Western imperialists and do-gooders. It makes them feel right.

“It can sometimes feel as if the entire West were trying to co-opt Malala, as if to tell ourselves: “Look, we’re with the good guys, we’re on the right side. The problem is over there.” Sometimes the heroes we appoint to solve our problems can say as much about us as about them. Malala’s answer is courage. Our answer is celebrity.” – Max Fisher

As Assed Baig wrote, “The actions of the West, the bombings, the occupations the wars all seem justified now, “see, we told you, this is why we intervene to save the natives.”

At the same time, we cannot, must not blame Malala because she was shot by a Talib, not by a drone. She was only 14. To expect her to create a complex narrative is unfair and unrealistic. Rather, the blame lies more upon her father and the adults around her, who are constantly and consistently feeding the story that the Western military complex loves to hear.

I cannot conclude without saying that Malala is a brave, eloquent girl, who can be a leading force for positive change in Pakistan. Despite the issues I have mentioned, we should still be proud of her as she is an amazing kid.

I just hope that Malala is allowed to fully blossom and mature into an independent thinker, and not just another human drone.

Look Who’s Coming Out, But It Isn’t What You Think

Confessions of a Jaded Drama Queen