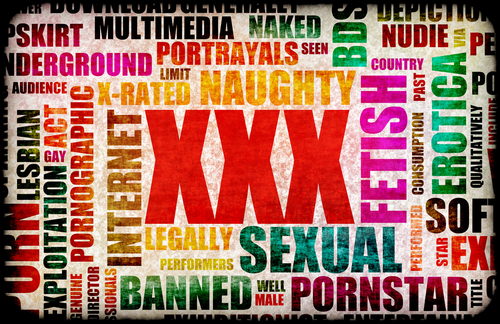 We are in a mess. We are in a moral and ethical meltdown. No, it’s not lying, cheating, gossiping or anything that is related to the tongue, it’s the other part that our beloved Prophet

asked us to safe guard—the part between the two legs.

Fast-forward ten years, another sister called me, crying, bawling about her marital issues, confessing, “My husband sees prostitutes.” Her husband is, also, not only a well known young Muslim of the community but someone that practicing Muslim parents would desire for their daughter’s prospective husband. My reaction this time was vastly different; I responded to her matter-of-factly, “It happens sometimes.”

Once acknowledged, I had to understand why it happens and how it happens. That’s when I extended my research. Other than the fact that it is a trap of Shayṭān, I had to comprehend male sexual psychology. I read extensively about this topic, bought books, read articles, and even consulted a sex therapist who is also a good friend.

Consequently, I learned to accept the fact that a man may be devout in his dīn and, at the same time, he can be involved in the disturbing fitnah of sexual cravings, giving into his carnal desires in a way that doesn’t suit his apparent Muslim identity, yet his nafs agrees to obey his ultimate enemy.

One morning a few years ago, taking a break from my kids, I was enjoying a late breakfast alone at Denny’s when a woman from the next table started talking to me. She was younger, Caucasian, dressed in good ol’ jeans and a t-shirt, seemed like a person I could carry on a conversation with. In the middle of our talk, when I asked her what she does, she quietly said, “I’m a hooker.”

I almost choked on my coffee. I wasn’t sure if I was supposed to continue talking to her or turn away. The irony of the situation didn’t escape me, her and me, on the same table, chit-chatting. I was seriously disturbed, and it took me a few minutes to remind myself that I had no right to judge her and I had absolutely no right to think of myself as superior.

Later during our talk, she asked me about our “multiple” prayers a day. Surprised, I asked how she knew, “Oh, I’ve a lot of Moozlim customers, [Most of my customers are Muslim].”

I was heartbroken, I wish she hadn’t said that, I wish she’d named some other religion’s followers to be her most common customers, but she didn’t. And I didn’t see any reason why she should be lying to me.

“Oh yeah I have plenty of men from your faith come to me, I can tell by their names… [sometimes, I’ve seen them pray] and sometimes they like to talk.” Shocked and ashamed I bombarded her with questions about the Muslim men who were her most common customers. She named a particular ethnicity among the Muslims being really rough (UPDATE: My original line was removed. Rest assured it was never intended to be a racist comment. In fact, it was in defense of my brothers.)

What was I supposed to say to her? That while I want to tell you about my religion, I am ashamed that the men you have the worst experience with, are actually my brothers in faith? Should my brothers even be having any illegitimate relationships with her to begin with?

I felt sick in my stomach, completely grossed out, almost puking… not at her—the prostitute—but at my own brothers!

I don’t understand why I had to run into a prostitute, and why I learned that her common customers were Muslim men—but it happened, and I’m sure that there was a good reason it happened.

Perhaps it helped me realize the extent of this disease spread out in our Ummah, perhaps it made me see the other side or it helped me accept that many Muslim men have another controversial life.

Even if I assume that those brothers seeing that hooker were not practicing enough, I cannot turn a blind eye on those sisters who had shared their personal stories, married to some practicing Muslims, regular masjid attendees, with long beards and high motivations of leading a good Islamic life while some even wake up for qiyām and memorize Qur’ān.

I could not close my ears when a respected shaykh highlighted the fact that we would be surprised to find some of the famous active da’ees  inviting women into their hotel rooms. (This is not meant to make the reader doubt da’ees, shuyukh, and active personalities in the community, or worse, judge them. It’s to bring awareness that this is a growing problem about which we thought our communities are immune to, but unfortunately that is far from the truth.)

I asked myself, could this be happening because we are not raising our sons correctly? But many men suffering through this problem were raised in good Muslim families. A recent case of a hafidh-ul-Qur’ān left me flabbergasted and scared.

What about my son? Am I doing enough to protect him? What can I do to make sure he doesn’t fall prey to this corruption? If so many men in this fitan came from good families, were raised upon high moral values, received a good tarybiyyah at home, then what went wrong?

He didn’t understand why someone would resort to such disgusting actions. I had to be honest with him, “Girls that seem so icky and unbearable right now to you will turn into some amazing being once your hormones kick in, Shayṭān uses that attraction to make a person give into their desires, and men end up obeying Shayṭān.”

Confused, he asked, “How do I make sure that I don’t do any fahash (immoral/indecent)?”

After seeing the struggle among practicing Muslims—torn between their faith and their carnal desires, struggling to get out yet slipping again and again, hurting themselves, destroying their marriages, making us lose trust, and the destruction that this sin causes for an individual, I can’t just cast it aside. How do we make sure that our loved ones and even ourselves don’t fall into this sin?

Then an answer dawned at me, alhamdulillāh. I was able to look back into his eyes with certainty and respond, “Make du‘ā’ for yourself!” I said confidently. “From this day onwards, develop a habit of making du‘ā’ in every sajdah of yours, ‘Oh Allah please keep me chaste, pure, away from the lewdness, and amongst those who guarded their private parts.’ Start today and if your du‘ā’ is accepted, inshā’Allāh you will be protected because it is only Allah who can protect you from this evil.”

Editor’s note: We apologize for the publishing of  the reference to a racial group- it should not have been included despite any good intentions.