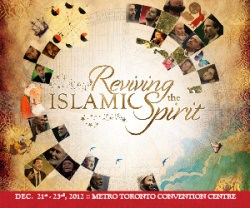 It was during my first year at McMaster University, in the fall of 2007, that I first started hearing about the Reviving the Islamic Spirit (RIS) Conference. I wasn’t familiar with the concept of an Islamic conference at the time, let alone attended one. Like most Muslim students entering university, I was still discovering my faith and was in the process of negotiating the role religion played in my life.

I wasn’t sure if I wanted to go to the convention at first; didn’t think it was for me.  However, after advice from a friend and learning that Shaykh Hamza Yusuf would be speaking, I decided that I was going to check it out. I had recently started listening to the Shaykh and was quite inspired; I thought I might get a chance to meet him in person. Besides, what else did I have to do on Christmas weekend?

I still remember the exhilarating experience of entering the main halls of RIS for the first time. In front of me lay rows upon rows of enthusiastic attendees; attentively listening to the wisdom being shared. I was struck by the grandeur and elegance of the stage; decked with its signature lighting and gigantic screens. Sami Yusuf’s Asma Allah echoed with glory around the auditorium, complementing the grandeur of the scene. The unique vibe of thousands of Muslim gathering is overwhelming, yet comforting.

However, what made that place truly magnificent was the spiritual presence of erudite scholars who graced us with their presence that evening. One after the other, they took the stage, showering us with wisdom and insight. Their cheerful countenance and stately comportment stirred in me a desire to emulate them. I was moved; I was inspired; I was humbled.

Surprisingly enough, I did get a chance to meet Shaykh Hamza that night. I managed to crowd-surf through the flock of people surrounding him following his segment. I was so overwhelmed at our first meet that I could barely speak. I simply hugged him and thanked him for his incredible effort. Looking back, I realize now that it was Sh. Hamza’s lecture titled The Spirit of Islam that marked a turning point for me in how I engaged with my faith. And here I was, at Reviving the Islamic Spirit, meeting him in person.

Shaykh Hamza wasn’t the only scholar I was introduced to that weekend. Another individual who has since become a dear teacher, Shaykh Yasir Qadhi, was also giving a lecture at RIS. I still remember his entertaining pun about marriage in Islam and the crucial role played by the Matrimonial Services Affiliation in preserving this tradition – by that he was referring to the MSA of course. Over the coming years, I would meet many of today’s leading Muslim figures at RIS; Professor Tariq Ramadan, Sherman Jackson, Yusuf Islam and Imam Zaid to name a few.

The bustling bazaar of RIS is yet another one of its defining features. I don’t know if it’s the aroma of Eastern fragrances or the traditional attire worn by its attendees, but I felt like I was is in a scene from a 1001 Nights as I treaded through it. You can find anything there: garments, artwork, electronics, financial advisors, even Japanese bidets for Istinja. The monumental collection of bookstores has become my favourite attraction. It was here that I came to learn about institutions such as AlMaghrib Institute and SeekersGuidance; places that were to become a source of knowledge in the years to come.

There are many things that I felt distinguished RIS from other conferences; the 6 day Knowledge Retreat that follows the convention is perhaps its most unique attribute. While the conference is focused on general talks that revive and inspire us, the Retreat is focused on disseminating knowledge in a more academic setting. The Retreat was my first exposure to studying the traditional Islamic studies and inculcated in me a desire to continue pursuing it. Students have the opportunity to study and interact with leadings scholars like Shaykh Abdullah Bin Bayyah, Professor Tariq Ramadan and Abdul Hakim Jackson. The Knowledge Retreat is truly a rare opportunity to study with all the intellectual giants of our time.

Last year’s convention sold out for the first time, and this is year’s is anticipated to sell out quicker; especially given the extraordinary line up of speakers. In addition to the scholars already mentioned, this year’s highlights are: Ustadh Nouman Ali Khan’s debut at the convention, Dr. Amr Khaled’s first address to the West since the Arab Springs, Karen Armstrong’s first visit and Sami Yusuf’s release of his new album.

RIS has become the spring of the Muslims; it is more than an event, it’s a phenomenon. It has begun to define what the ‘Holiday Season’ means for Muslim families across North America. The convention has personally allowed me to grow and mature as a Muslim; it has by all accounts revived my spirit. If you haven’t attended it already, RIS is a wonder that needs to be experienced. It will rejuvenate your soul, revitalize your spirit and renew your inspiration.

Why We Love Islamophobia