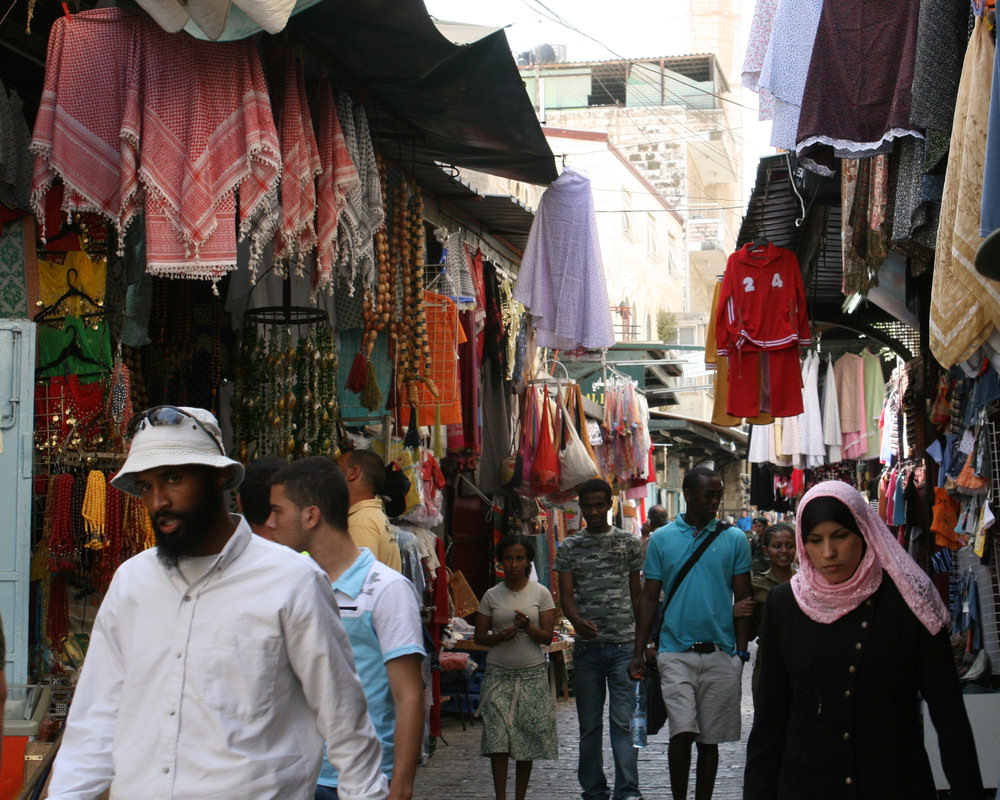 Seen from above, the size of the bazaar is incredible, row upon row of colorful stalls selling everything from food to ethnic clothing and books. This is the Islamic Society of North America’s (ISNA) annual convention in Washington D.C., and by the looks of this bazaar, faith has taken a consumerist bend.

One stall sells t-shirts; from the tongue-in-cheek, “I’m fly ‘Coz my Imaan is high” and “Think I’m hot? Hell is hotter. Lower your gaze,” to the cheerful, “Smile, its sunnah!” Another stall sells halal sweets and frozen foods, packaged to perfection so as not to look out of place in any standard American supermarket. Yet another stall sells designer hijabs, patented “pins-free” styles to silks and cashmeres with a broad selection of jeweled pins and brooches. Many stalls are from local businesses, yet several are from other cities and even abroad; one ethnic wear shop flew in especially from Pakistan, another Islamic book shop flew in from Britain. Brand Islam seems to be truly making its mark – on a global scale.

The bazaar is teeming with shoppers as they make purchases for upcoming Eid or wedding events, stock up on the latest literature, or enjoy the latest in halal savory snacks. Notwithstanding the countless lectures, seminars, and workshops the conference conducts, led by world class speakers, many flown in specially, the bazaar remains a central attraction of the convention. At the end of each day, one overhears attendees speaking of their purchases; the latest book by Professor Tariq Ramadan, a new Emirati jilbab adorned with Swarovski crystals, or a child’s new salwar kamiz for the upcoming Eid celebrations.

A few months later, across the border in the Canadian capital of Toronto, is the annual Reviving the Islamic Spirit (RIS) conference, and the story is much the same. An event that hosts tens of thousands of Muslims from across Canada and abroad, the conference hall is matched in size by its adjacent bazaar hall. Arabic calligraphers design names with flourish. The largest stall is for women’s modest fashion, selling outerwear such as jilbabs and long coats, to casual tops and skirts. A store selling beautiful Arabic calligraphy showpieces delicately carved out of wood catches the eye. Verses of the Qur’an and the names of Allah adorn the vast display. One can’t resist purchasing a piece – God’s name, “Al-Rahman, The Merciful” – a small coffee table showpiece, an affordable token from a pricey selection. The eye however lingers on the gorgeous circular carved, “Ayat al-Kursi, the Verse of the Throne,” a vast bronze creation well beyond budget, although well within dreams.

But is there something unsettling in the commercialization of faith that this bazaar seems to epitomize? Should faith be a t-shirt worn, or a state of mind and heart? Is there something paradoxical in the materialism of luxury hijabs?

Muhammad Haque, an organizer at an American Muslim charity which held a stall at this year’s ISNA bazaar, doesn’t think so. “The commercialization of Islam has brought products and services that fulfill the needs of Muslim consumers,” he suggests. To Muhammad, the benefit of brand Islam is not only for the consumers, “Doors are opened for entrepreneurs into niche markets who otherwise would have failed to penetrate a mature and competitive conventional market.”

However, there are those who feel commercialization is contrary to the spirit of faith. Rofiqul Islam is a Briton who often attends Islamic events such as the massive Global Peace and Unity (GPU) conference held annually in London. His thoughts on the shifting culture are mixed. “Modern expansion and commercialization is far from the true spirit of Islam. It’s driven by selfish ends,” he contends, adding that, “It is by revealing and upholding the truth, Muslims inspired people around the world, rather than commercial culture and marketing of religion.”

Although the commercialization of faith may seem worryingly contrary to the spiritual nature of Islam, there is no denying the attraction it has for Muslims of all leanings. Nabeela Chowdhury, a Canadian who enjoys attending RIS, feels the bridging and unifying factor that comes with the branding of Islam, “To me commercialization of Islam is a good thing because it brings the Muslims together as a large community. By drawing people to events like RIS and ICNA (Islamic Circle of North America) conferences, Muslims can feel and show their community spirit while also learning from the live lectures by diverse speakers. Alongside that they can also shop for Islamic goods.”

While a prayer in a mosque may be a more traditionally encouraged form of faith, to many, Islamic products are a bridge to faith for those less inclined to a mosque setting but more likely to seek out quirky new styles and delicious halal food. Yet, branding Islam is not simply about consumer products at major conventions. In a climate where Islam is frequently misrepresented in the press and disproportionately aligned with acts of terror, marketing the faith has taken another role.

Inspired by Muhammad, a British campaign which included a series of advertisements across London’s transport services, has turned to commercial culture to strengthen the image of the faith. The initiative saw the marketing of Islam and the Prophet Muhammad’s positive message through showcasing successful Muslims who affirm the Islamic Prophet as the inspiration for their positive actions. From converted MTV presenter and environmental activist, Kristiane Backer, to leading human rights barrister, Sultana Tafadar, and Cambridge University Professor, Dr. Timothy Winter, advertisements sought to counter controversial and inaccurate portrayals of Islam.

Whatever one thinks of Islam’s growing commercial culture, one fact remains true: it is a culture that is rapidly expanding to match its ever-increasing demand. Each new convention draws an even bigger crowd and ever more consumers to the floors of the mandatory bazaar. Meanwhile, outside the walls of Islamic conferences, the Muslim community is finding ever more creative ways to adapt consumerism to their faith and culture. How this will translate in the long run remains to be seen. For now, however, Brand Islam appears here to stay.

MuslimKidsMatter | The Prisoner of Life Poem (Ode to Children in Gaza)