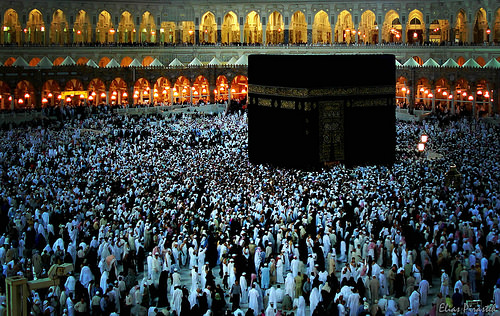 There is no place on Earth as venerated, as central or as holy to as many people as Makkah. By any objective standard, this valley in the Hijaz region of Arabia is the most celebrated place on Earth.

Thousands circle the sacred Kaaba at the centre of the Haram sanctuary 24 hours a day. Millions of homes are adorned with pictures of it and over a billion face it five times a day.

The Kaaba is the epicenter of Mecca.

The cube shaped building is at the heart of the most well-known real estate in the history of mankind; it is shrouded in black and its fair share of mystery.

Here are just a few things that most people may not know about the Kaaba:

10. It has been reconstructed several times

From time to time, it has needed rebuilding after natural and man-made disasters.

Of course, we all know of the major reconstruction that took place during the life of the Prophet

before he became a Prophet

. This is the occasion when the Prophet

averted major bloodshed by his quick thinking on how to place the Black Stone using a cloth that every tribe could lift up.

Since then, there has been an average of one major reconstruction every few centuries. The last renovation took place in 1996 and was extremely thorough, leading to the replacement of many of the stones and re-strengthening the foundations and a new roof. This is likely to be the last reconstruction for many centuries (inshaAllah) as modern techniques mean that the building is more secure and stable than ever before.

The original Kaaba used to have a door for entrance and another for exit. For a considerable period of time it also had a window situated to one side. The current Kaaba only has one door and no window. 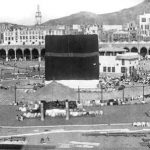 8. It used to be multi-coloured

We are so used to the Kaaba being covered in the trademark black Kiswah with gold banding that we can’t imagine it being any other colour. However, this tradition seems to have started at the time of the Abbasids (whose household colour was black) and before this the Kaaba was covered in multiple colours including green, red and even white.

7. The keys are in the hands of one family

At the time of the Prophet

, each aspect to do with the rites of Hajj was in the hands of different sub-groups of the Quraish. Every one of these would eventually lose control of their guardianship of a particular rite except one. On the conquest of Makkah, the Prophet

was given the keys to the Kaaba and instead of keeping it in his own possession; he returned them back to the Osman ibn Talha ® of the Bani Shaiba family. They had been the traditional key keepers of the Kaaba for centuries; and the Prophet

“Take it, O Bani Talha, eternally up to the Day of Resurrection, and it will not be taken from you unless by an unjust, oppressive tyrant.”

Whether Caliph, Sultan or King – the most powerful men in the world have all had to bow to the words of the Prophet

and ask permission from this small Makkan family before they can enter the Kaaba.

6. It used to be open to everyone

Until recently, the Kaaba was opened twice a week for anyone to enter and pray. However, due to the rapid expansion in the number of pilgrims and other factors, the Kaaba is now opened only twice a year for dignitaries and exclusive guests only.

Watch the video attached here to witness the doors of the Kaaba being opened (at 50 seconds) – and the simultaneous gasps of a Million people as they cry out at this auspicious moment.

5. You used to be able to swim around it

One of the problems with having the Kaaba situated at the bottom of a valley is that when it rains – valleys tend to flood. This was not an uncommon occurrence in Makkah and the cause of a lot of trouble before the days of flood control systems and sewage. For days on end the Kaaba would be half submerged in water. Did that stop Muslims from performing the Tawaf? Of course not. As the picture below amply shows – Muslims just started swimming around the Kaaba.

Modern adjustments to the surrounding landscape and flood prevention techniques mean we may never see such sights again. Or will we? Check out this recent video.

4. The inside contains plaques commemorating the rulers who renovated it

For years many have wondered what it looks like inside the Kaaba. Relying on second or third hand accounts from those who were lucky enough to enter just wasn’t satisfying enough. Then one lucky person who went inside took his camera phone in with him and Millions have seen the shaky footage online.

The interior of the Kaaba is now lined with marble and a green cloth covering the upper walls. Fixed into the walls are plaques each commemorating the refurbishment or rebuilding of the House of Allah by the ruler of the day. Watch the video below of the only place on Earth that you can pray in any direction you want, the House of Allah, the first place of worship for mankind – the Kaaba.

Directly above the Kaaba in heaven is an exact replica. This Kaaba was mentioned in the Quran and by the Prophet

said narrating about the journey of ‘Isra wal Miraaj

“Then I was shown Al-Bait-al-Ma’mur (i.e. Allah’s House). I asked Gabriel about it and he said, This is Al Bait-ul-Ma’mur where 70,000 angels perform prayers daily and when they leave they never return to it (but always a fresh batch comes into it daily).”

2. The Black Stone is broken

Ever wondered how the Black Stone came to be in the silver casing that surrounds it?

Some say it was broken by a stone fired by the Umayyad army laying siege to Makkah whilst it was under the control of Abdullah ibn Zubair ®.

However, most agree that it was most damaged in the middle ages by an extreme heretical Ismaili group from Bahrain called the Qarmatians who had declared that the Hajj was an act of superstition. They decided to make their point by killing tens of 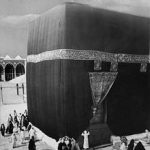 thousands of hujjaj and dumping their bodies in the well of Zamzam.

As if this act of treachery was not enough, these devils took the Black Stone to the East of Arabia and then Kufa in Iraq where they held it ransom until they were forced to return it by the Abassid Caliph. When they returned it, it was in pieces and the only way to keep them together was by encasing them in a silver casing. Some historians narrate that there are still some missing pieces of the stone floating around.

1. It’s not supposed to be a cube shape

Yes, ladies and gentleman… the most famous cube in the world actually started out shaped as a rectangle.

I’ll give you a moment to pick your jaws off the floor.

Right, where were we?

Oh yeah, the Kaaba was never meant to be a cube. The original dimensions of The House included the semi-circular area known as the Hijr Ismail.

received his first revelation, the Quraish agreed to only use income from pure sources to complete the rebuild. That meant no money from gambling, looting, prostitution, interest etc. In the ultimate sign of how deeply mired in wrongdoing the Jahili Quraish were, there was not enough untainted money in this very wealthy trading city to rebuild the Kaaba to its original size and shape!

They settled for a smaller version of the Kaaba and put a mud brick wall (called “Hijr Ismail” although it has no connection to the Prophet Ismail (A) himself) to indicate the original dimensions. Towards the end of his life, the Prophet

intended to rebuild the Kaaba on its original foundations but passed away before he could fulfill his wish. Apart from a brief interlude of a few years during the reign of Caliph Abdullah ibn Zubair ®, the Kaaba has remained the same shape that the Prophet

The history of the Kaaba is not just an interesting story from our past. The Kaaba is a real and present symbol that connects all Muslims together wherever they may be. It also connects us to our glorious and not-so-glorious past so that we may derive lessons and feel that we are a part of an eternal mission. In a day and age where Muslims are increasingly disconnected from our history,as well as each other, the Kabaa reminds us of our shared heritage and bonds. It is a symbol of unity in an Ummah sorely in need of it.

You may be interested in the other articles in this series…

9 Things you didn’t know about the Prophet’s Mosque