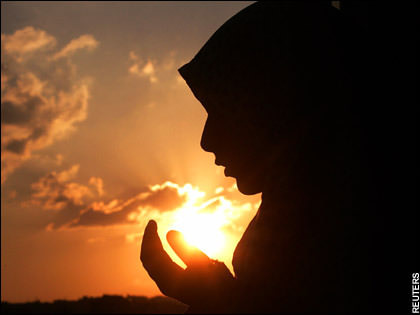 In the first part of this series, we discussed the importance of faith in Allāh, du‘ā’ and Divine Love that led to women making incomparable contributions in society. The stories in this article are of women whose love and faith in Allāh was so strong that it built in them a strength of mind and courage that was exemplary for the men and women in their times and for generations to come. Here, we focus on powerful women in the battle-field and behind the field.

As a child, whenever we talk about the Battle of Uḥud, we are taught that a lesson from this Battle was on the importance of listening to your leader and following his or her commandments. When Muslims disobeyed the Holy Prophet

, and the group of men he had appointed to guard a certain spot on the mount of Uḥud left their grounds in greed of booty, the enemies seeing Muslims exposed re-launched their attacked and caught the Muslims off-guard. Muslims suffered great defeat in this war and there was in fact even a time here that the Holy Prophet

was surrounded by enemies in the battle-field.

Women as knights and soldiers in the battle-field:

Umm Umarah is one such brave woman whose story comes to limelight here. She, along with her sons and husband, surrounded the Holy Prophet

in order to protect him from the enemies. With a sword in one hand and a shield in the other, she showed remarkable valour and presence of mind so that the Holy Prophet

himself remarked “‘from where can anyone get courage like you, O Umm ‘Umarah?'”

Umm Hakim, was another lady from the early days of Islam, whose two husbands were martyrs. In fact it was on the second day of her marriage to Khalid bin Saeed, when she was still dressed in bridal clothes, that the Byzantine soldiers attacked her tent in Marj al-Saffar (in Syria). Displaying amazing strength of mind and fearlessness she pulled out a pole from the tent and struck 9 Byzantine soldiers who attempted to enter her tent. She survived the war and was later proposed to marriage by Caliph Umar.

These stories clearly demonstrate that in the eyes of Allāh , there is no difference between the contribution the courage of a woman can make to that of a man’s. The key ingredient to have is absolute faith and love in Allāh. It also shows that in early Islam, perhaps they were far more progressive than our current societies in accepting and encouraging skills in women. For example, the legendary Khawla bint al-Azwar is renowned in history for her skills of swordsmanship and she proved to be such a fearless knight in times of war that the men of the army prayed for her safety and admired her courage.

In thinking about and taking inspiration from the women in the battle-field, let us not forget about the strategizing women behind the scenes that controlled the situations with their political acumen, scheming skills and strength of mind and character. For example, Azdah bint al-Harith from Iraq on seeing the men of her army exposed to the enemies, schemed and advised all women to tie their headscarves and create a huge banner. With this banner they charged towards the enemy giving them the impression that the Muslim army was reinforced and strong.

Not from the days of early Islam, but definitely another example of strong women in Muslim history, Turkan Khatun of Iran was another such strategist that with her political acumen took control of the army after her husband’s death until her son could regain its power. Razia Sultana of South Asia is another strong Muslim woman ruler who was trained in the art of swordsmanship and techniques of the battle-field. Her father preferred her to take control of the throne because of her political acumen, even over his sons, hence clearly demonstrating the stereotype that Muslim men wish to see women as suppressed souls a total fallacy.

Al-Udar al Karimah is an example from Yemen of a woman with strong political and administrative intelligence, such that when her son had left Yemen for 14 months in order to fight for the protection of Egypt which was part of the reign then, he left his mother in-charge of the government. It is believed that she succeeded better than her son in gaining administrative control over the reign and spreading justice and orderliness.

Another extremely strong women was Shajarat al-Durr of Egypt. While the Crusades were underway, Louis IX came with his troops to occupy Cairo. During this time, Sultan al-Salih Ayyub died of an unknown fever. Shajarat protected the enemies from taking advantage of this perfect opportunity to defeat the Muslims, by concealing the sultan’s death and managing the control of Egypt long enough for Sultan al-Salih’s son Turan Shah to return from northern Syria and take over the command! In this way Shajarat protected her people and land from the Crusaders! Soyembika of Kazan (current Russia) of whom we know much little, is another heroine of her land, where she used her intelligence to protect her people and land from the enemy.

Hidden in each of these stories is a lesson of love for Allāh strengthening the faith of these women, such that they were gifted with valour and intelligence. They used both for the protection of their people and land and are remembered in history for these contributions. Half way through Ramadan, this series makes it clear that in Islam and in Muslim societies, historically there has been equal recognition and admiration of skills and intelligence of both men and women. It is up to us to take lessons from the lives of these women and bring up our future generations to have faith in Allāh and faith in their characters and minds.

To read more on each of these women, follow these links here:

Related Topics:30 days 30 womenIslammuslimsramadanRamadan2012women in Islam
Up Next