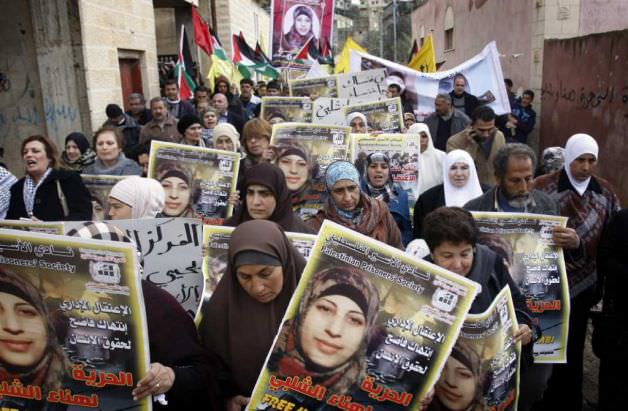 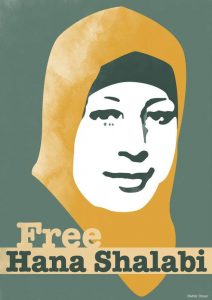 Palestinian female prisoner, Hana’ al-Shalabi  enters today her 31stday of hunger strike. She informed her lawyer that she stopped taking salt and is only taking water and that she will continue until her release.

According to her lawyer, Raed Mahameed, that Shalabi was examined by a doctor from Physicians for Human Rights and the doctor said that she suffers from law heart beat rate, law blood sugar, loss of weight, weakness in muscles, yellowing of the eyes and high levels of salt  in the blood which affected her kidneys causing her pain in her sides specially the left side as well as pain in chest bones.

Physicians for Human Rights said that Shalabi cannot sleep because of pain, she also suffers dizziness and blurred and occasional loss of vision.

Salabi told Mahameed that she took salt last week but refused to take any salt and is living on two litres of water  a day.

No sooner had Khader Adnan ended his 66 day life threatening hunger strike than new urgent concerns are being voiced for Hana Shalabi, another West Bank hunger striker now without food for more than 24  days (now 31). Both strikes were directed by Palestinian activists against the abusive use of administrative detention by Israeli West Bank occupying military forces, protesting both the practice of internment without charges or trial and the degrading and physically harsh treatment administered during the arrest, interrogation, and detention process.

The case of Hana Shalabi should move even the most hardhearted. She seems a young tender and normal woman who is a member of Islamic Jihad, and is dedicated to her family, hopes for marriage, and simple pleasures of shopping.

She had previously been held in administrative detention at the HaSharon prison in Israel for a 30 month period between 2009 and 2011, being released in the prisoner exchange of four months ago that freed 1027 Palestinians and the lone Israeli soldier captive, Gilad Shalit. Since her release she has been trying to recover from the deep sense of estrangement she experienced in prison, and rarely left her home or the company of her family.

As she was returning to normalcy she was re-arrested in an abusive manner, which allegedly included a strip-search by a male soldier. On February 16, 2012, the day of this renewal of her administrative detention, Hana Shalabi indicated her resolve to start a hunger strike to protest her own treatment and to demand an end of administrative detention now relied upon by Israel to hold at least 309 Palestinian in prison. Her parents have been denied visitation rights, Hana Shalabi has been placed in solitary confinement, and her health has deteriorated to the point of concern for her life. Impressively, her parents have committed themselves to a hunger strike for as long as their daughter remains under administrative detention. Her mother, Badia Shalabi, has made a video in which she says that even to see food makes her cry considering the suffering of her daughter.

Despite the calls to Palestinian from liberals in the West these extraordinary hunger strikes have met with silence or indifference in both Israel and the West. Israeli authorities declare that such a posture is a voluntary action for which they have no responsibility. The UN has not raised its voice, as well. I share the view of Khitam Saafin, Chairwoman of Union of Palestinian Woman’s Committee: “The UN must be responsible for the whole violation that are going on against our people. These prisoners are war prisoners, not security prisoners, not criminals. They are freedom fighters for their rights.” The plight of Hana Shalabi is also well expressed by Yael Maron, a spokesperson for the Israeli NGO,Physicians for Human Rights- Israel: “The story of Hana Shalabi, like that of Khader Adnan, before is in my opinion a remarkable example of a struggle that’s completely nonviolent towards one’s surroundings..It is the last protest a prisoner can make, and I find it brave and inspiring.”

To engage in an open ended hunger strike, especially for a person who is not in a leadership role, requires a deep and abiding dedication to right a perceived wrong of the greatest gravity. It is physically painful and dangerous to bodily health, as well as being psychologically demanding in the extreme. It presupposes the strongest of wills, and usually arises, as in these instances, from a sense that any lesser form of resistance is futile, and has a long record of failure. In the end, it is an appeal to the conscience and humanity of the other, and a desperate call to all of us, to understand better the cartography of abuse that abusive imprisonment entails, which I would imagine is pervasively humiliating for a religiously oriented young Islamic woman. To risk life this way without harming or even threatening the oppressor is to turn terrorism against the innocent on its head. It is potentially to sacrifice one’s life to make an appeal of last resort, an appeal that transcends normal law and politics.

We can only fervently hope and pray that Hana Shalabi’s heroic path of resistance will end with her release and the restoration of her health. For Israel’s own moral wellbeing it is time, really long past time, to renounce reliance on administrative detention and to do more than this, to end forthwith its varied crimes of occupation. At this point the only possible way to do this is to withdraw unconditionally behind the 1967 borders, and to start peace negotiations from that altered position. It is politically unimaginable that Israeli leaders will heed such a call, but it is morally unimaginable that Israel will survive its impending spiritual collapse if it does not do so.

The Dambulla Mosque Debacle and The Rise of The Minority Extremist