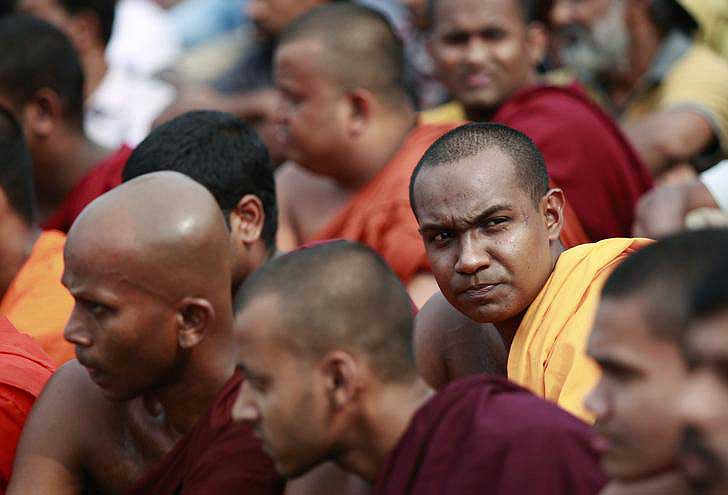 The city of Dambulla in Sri Lanka, more known for its representation in tourism brochures as a registered heritage destination for culturally-inclined tourists to the island, made headlines of a less-idyllic nature on the afternoon of Friday the 20th of April – when Buddhist monks led a 2000-strong protest against a local mosque. Intimidation in the form of marching picket-wielders, fire-bombs being hurled and emotionally-driven chants demanding the demolition of Masjidul Khaira led to the cancellation of Jumaah prayers at the masjid, the evacuation of worshipers and effective cordoning off of the premises.

Said protestors claim that the land on which the mosque is built is of reverential value and sacred to their faith, the reason for which the ‘illegal structure’ must go.  The Muslim community of Dambulla has countered the allegations stating that the mosque has in fact been lawfully registered and operational for the past 50 years.

Muslims in Sri Lanka make up roughly 8% of the 21.5 million-strong population, a percentage tying them in third place with their Christian counterparts, after Buddhism and Hinduism. A statistic that also has them tagged a ‘minority’ in the Sinhala Buddhist dominated (70% of population) nation.

Surprisingly (as is not usually the norm with these type of targeted attacks) the majority of immediate public reaction exchanged over social media and online forums was not of reactionary animosity directed towards Buddhism and the Buddhist community as an entity, but rather a collectively-acknowledged finger of disapproval pointing in the direction of another sort of minority  – the minority of radical trouble-makers representing  the very anathema of what Buddhism entails.

Aside from a negligible faction of ideological individuals out to instill and fester strained Muslim-Buddhist relations, true Buddhists embarrassed at this misrepresentation sympathized with the Muslim community, and the Muslims though understandably upset at being targeted in such a fashion, in turn acknowledged that the attacks were not definitive of general public sentiment.

All ears however were directed to the then-silent government, at the time yet to take a stand on the issue.

On Sunday the 22nd of April, the Prime Minister’s office released a statement ordering for the mosque’s closure, but ‘assuring ‘ the Muslim community that they would be provided with the necessary facilities to facilitate the relocation of Masjidul Khairah to a safer location. The decision claimed to have been collectively made with the consent of the country’s Muslim leaders, but the ministers in question have denied having had any say at the time.

This portrays the Sri Lankan government in a very negative light both internally and across international waters, especially to the Muslim countries who voted in support of Sri Lanka in the recent US-backed UNHRC resolution last month.

Despite a history in the island dating as far back as the 8th century, Sri Lankan Muslims feel they’ve been plated an unfair share of occasions to feel targeted, especially over the last couple of years. What with a similar incident in September 2011, and when earlier this year more than a hundred visiting Islamic preachers were asked to leave on grounds relating to flouting Sri Lanka’s immigration laws – this sentiment is not without argument.

The nationalization and politicization of Buddhism as a state religion has always been a cause for concern among the religious minorities, having the potential to hinder any balanced decision making that can serve to suitably placate all parties concerned.

The ethnic minorities have however proven their mettle in tolerance (not mere complacence) in light of recent events, but the minority in question that needs to be dealt with more pressingly, is this new surge of religious radicals set out to widen the divide on peaceful co-existence.

At the point of this going to print, the repercussions of this ordered move was only just getting started with a volley of words exchanged between the Muslim Council of Sri Lanka and the so-called ‘Buddhists’ behind the attacks.

The Muslim community of Sri Lanka seems to have now resorted to placing greater expectancies on the well-positioned Muslim parliamentarians (a considerably large representation in the current regime) than in the government as a whole. That in exercising their rights as MPs and leaders they will be dutifully positioning the well-being of the Muslim community before personal fears of potentially risking their political footing on the boards they represent.

If there is anything productive to come out of all of this, it is the exposition of the not-so-lesser-evil of the religious extremist. For like the hate-driven Breivik murders in Norway earlier this year, the exhibitionist tendencies of these misfits in question are being broadcast (and received) for what they truly are. A pandemic not just for the governments of Asia, Europe or America to learn to quash effectively long-term, but also a pressure test for the targeted groups to come out of it better represented than when they went in.

Related Topics:InterfaithIslamMasjidsminoritymuslimsSri Lankan Muslims
Up Next

Relief on The Runway- Empowering Women through Modest, Chic Fashion