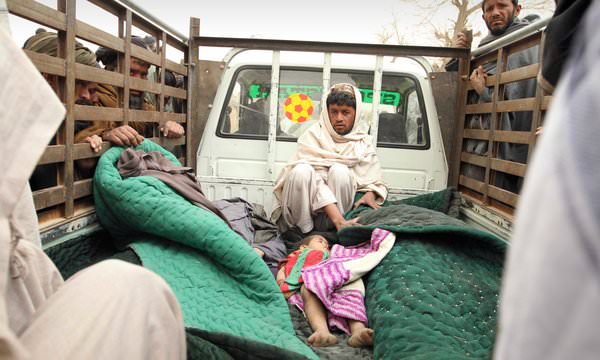 When people in interfaith meetings and mosque open houses question why do they hate us, do they forget that Afghans have been suffering for a decade under the US invasion. As news after news of massacres, and collateral damage blip through our newsfeeds. This latest massacre makes every motherly cell in my body weep. These were small children, little girls, toddlers killed point blank and then burned, incinerated much like the copies of the Quran that were burnt a few weeks ago. The official story is that there was on lone soldier in a NATO uniform who entered the homes in two separate village 2 km away from each other.

Update: Rueters reports that ‘Several drunk troops [were] behind bloodbath, laughed on shooting-spree, burned corpses’. Haji Samad lost all of his 11 relatives in the rampage, including children and grandchildren. He claims Marines “poured chemicals over their dead bodies and burned them.”

“We have benefited little from the foreign troops here but lost everything – our lives, dignity and our country to them,”said Haji Najiq, a Kandahar shop owner.

Why Not a Massacre Tribunal in Afghanistan?

An arrest, a presidential apology, local outrage and anger, a plea for calm and the promise of investigations — that’s the usual rapid-reaction scenario after incidents like the apparent slaughter of 16 Afghan civilians, 9 of them children, by an American sergeant.

What is almost never considered, however, is a trial of the perpetrator in the country where the crime took place. It’s one of the reasons the United States “unjoined” the International Criminal Court and forces other countries to sign bilateral agreements that protect American soldiers from prosecution abroad.

But is a trial in situ really so crazy — as a kind of soft-power diplomacy, as a kind of calming outreach to countries where the United States has a substantial military presence? Why not a joint military tribunal or a combined court-martial by U.S. forces and the Afghan National Army?

Prince Abdul Ali Seraj, president of the National Coalition for Dialogue With the Tribes of Afghanistan, said Sunday that “the only way to calm the nerves as soon as possible is to hand this person over to the Afghan government to be tried under Afghan law.’’

“If they are to take this person out of Afghanistan to the United States in order to try him there, I think it’s not going to satisfy the people here,’’ Mr. Seraj said in a video interview on Al Jazeera.

Residents of three villages in the Panjwai district of Kandahar Province described a terrifying string of attacks in which the soldier, who had walked more than a mile from his base, tried door after door, eventually breaking in to kill within three separate houses. The man gathered 11 bodies, including those of 4 girls younger than 6, and set fire to them, villagers said. At least 5 people were injured.

While some Afghans had speculated that helicopter-borne troops were involved, a senior American diplomat told a meeting of diplomats from allied countries on Monday morning that the gunman had acted alone, walking first to a village and then to a cluster of houses some 500 yards away. He returned to the base and is in custody. He is to face charges under the military justice system, officials said. Helicopters and other troops arrived only after the shooting, the diplomat said, and the helicopters evacuated the wounded.

A senior American military official said the sergeant was attached to a unit based at Joint Base Lewis-McChord, a major Army and Air Force installation near Tacoma, Wash., and that he had been part of what is called a village stabilization operation. In those operations, teams of Green Berets, supported by other soldiers, try to develop close ties with village elders, organize local police units and track down Taliban leaders. The official said the sergeant was not a Green Beret himself.

Panjwai, a rural district near the city of Kandahar, was traditionally a Taliban stronghold. It was a focus of the United States military offensive in 2010 and was the scene of heavy fighting. Two American soldiers were killed by small-arms fire in Panjwai on March 1, and three died in a roadside bomb attack in February. Read rest here

Here is a rather privileged article from The Atlantic about how the west ” should try to understand what led the rogue sergeant to murder 16 Afghan civilians on Sunday, and maybe even apply the same empathy to Afghan acts of terror.”

It would not be easy for Americans to humanize an Afghan terrorist, and it would especially hard to empathize with his crime. But we’ve done exactly this with school shooters for years, and we will do it with Sunday’s as-yet-unnamed rogue soldier, because we seem to understand that we have a responsibility to learn from what happened, however painful the process may be. Maybe it’s time for us to try to understand the Afghans — or even the Pakistanis or Iraqis or others — who have committed similar senseless acts. If we did, we might not like what we found, but we would be better off for knowing. And so, one suspects, would they. Read rest here

Related Topics:AfghanistanIslammuslimsOperation Enduring Freedom
Up Next