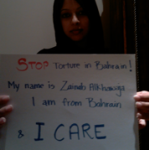 As the Middle East continues to be enveloped in political turmoil and media outlets bombard us constantly with new information, I, for one, had become desensitized to the gravity of the situation there. As sad as it sounds, after a while the stories about dreadful combat and war just become headlines you skim over. However, I was reminded of the harsh reality of the human struggle in Bahrain when I heard the heart-breaking story of Zainab Al-Khawaja.

Zainab Al-Khawaja is the daughter of a prominent Bahraini human rights activist and former president of the Bahrain Center of Human Rights, Abdulhadi Al-Khawaja. Her father has been instrumental in reporting human right abuses in Bahrain and has been an outspoken advocate of civil rights and democracy. He recently also spoke about putting the Bahraini king on trial for perpetrating widespread corruption and crimes.

About two months ago, security forces stormed Abdulhadi Al-Khawaja’s house and arrested him, after savagely brutalizing him in front of his family. He was repeatedly beaten and was pounded to the point of unconsciousness; all this despite him offering to surrender voluntarily. When Zainab and her family tried to interfere, the women were thrust aside and her husband and brother-in-law were beaten up and arrested as well. This incident happened only after three weeks of Zainab’s uncle being arrested in a similar fashion.

Not having heard a word about her family\’s whereabouts for three days since the incident, Zainab’s desperation led her to take extreme measures. In order to protest this injustice and to bring the world\’s attention to her cause she decided to go on a hunger strike. She marked the beginning of her hunger strike with an open letter to the President of the United States posted on her blog AngryArabiya.

Western powers have been opportunistic as usual when it comes to opposing regimes on humanitarian grounds. Zainab in her letter addresses President Obama and pleads to withdraw his support of the monarchy in Bahrain. If he is vocal in speaking out and helping the humanitarian cause in Libya, then at the very least, he should quit supporting Bahraini dictator, she argues. Intervention from the West is based on interest, not principle it appears.

Zainab’s cause gained reasonable attention, perhaps not as much as it deserved though. The story was blogged around and reported by many major news outlets including The NewYork Times, The Guradian, CNN, BBC and The Huffington Post; I heard her narrative on CBC Radio where she bravely described her painful story and shed light on human right violations perpetrated by the Bahraini dictatorship.

Suffering from extreme weakness, Zainab ended her hunger strike on its 10th day after persuasion from human right groups who wanted her to continue speaking and fighting for the cause. She was also finally informed that her father was being kept in a military prison and was allowed a short phone call. Her determination inspired hundreds of people in Bahrain, USA and Saudi Arabia amongst other countries who also went on a hunger strike in protest.

Over two months since the unjust arrest, on June 22, 2011 Abdulhadi Al-Khawaja, along with fellow activists, was sentenced to life imprisonment. Zainab, too, was arrested briefly for disrupting the court by chanting Allahu Akbar after the verdict. Her father is being kept in solitary confinement in a military prison where he is tortured, physically and psychologically, for inciting hatred against the regime. During his trials, the judge ignored signs of abuse on his body and his cry for justice. As for her husband, with the exception of a phone call, Zainab and her 2-year old daughter have had no contact with him since the arrest; his location is still kept secret and no charges have been laid.

Zainab’s compelling story is one that is shared by hundreds of families who have loved ones under arrest for exercising free speech and protesting the atrocities of the Al-Khalifa regime. Her struggle, her jihad, serves as a role model for those wanting to fight injustice and protest Western foreign policy. Her non-violent methodology has proved to be far more successful and demonstrates that civil disobedience, though not as dramatic, can still be quite effective and inspirational.