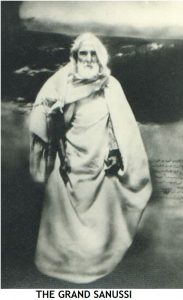 A violent and unhinged dictator has used overwhelming air power and foreign mercenaries to mow down Libyans who dare protest against his tyranny. Teachers, lawyers, and peasants have taken up arms in a rag-tag rebellion against the dictator. Egyptians vow to help their brothers and sisters in Libya but can do little due to their own difficult political situation. There are a great many similarities between the genocide perpetrated by the forces of Mussolini in his vain attempt to re-enact the Roman conquest of Libya and the actions of Gaddafi today.

Back then, the Libyan people faced seemingly insurmountable odds against victory. They were armed with ancient rifles and swords whilst the Italian army faced them down with all the resources available of a modern state, everything from tanks to fighter planes. Despite the desperate situation, Libyans continued their struggle against their oppressors with persistence.

A large explanation of the will and resolve of the Libya people was exemplified in their leader – the Grand Sanussi. Although a native of Algeria, he studied in Morocco and developed his Sufi order in Makkah thereafter, before finally settling in Eastern Libya. the Grand Sanussi was the very embodiment of Muslim unity to his followers. From his base in Zawia Baida (the White Monastery) he called people back towards an Islam free of sectarianism and superstition. His message reverberated around the world, but nowhere more than his adopted homeland of Libya. Within his lifetime it was estimated that a third of all Libyans were part of his movement.

When Libya was invaded, the Grand Sanussi did not retreat back into the mosque but instead became the leader of the resistance. For years the Libyan people suffered but did not surrender. The Grand Sanussi died before he could achieve victory, but his son Muhammad Al-Mahdi Sanussi took up his mantle and continued the struggle throughout his adult life. At a particularly difficult moment, he travelled to Istanbul to discuss the deteriorating situation in Libya with the Ottoman Caliph. However, when he attempted to return home he found that he was prevented from doing so by the army of the oppressors. He would never see his beloved Libya again, instead spending his last days in Medina.

Muhammad Al-Mahdi left behind one of his followers to continue the struggle – his name was Omar Mukhtar. A Quran teacher from near Tobruk, Omar led the Libyans in their seemingly impossible struggle. Through a combination of faith and excellent military strategy, he managed to keep the hopes of victory alive. The oppressors showed no mercy, however, imprisoning large sections of the Libyan population in concentration camps attempting to starve them into submission. Over half a Million died before Omar Mukhtar was captured by the Italians. Three days later, he was hanged in front of his people as a warning to all those who dared believe that they could overthrow the oppression of tyrants.

The Grand Sanussi had died, Muhammad Al-Mahdi was exiled and Omar Mukhtar was martyred but the spirit of the Libyan resistance remained alive. Eventually, Libya would be granted independence but it was not the kind of independence that they had dreamed of. Instead, one of the grandchildren of the Grand Sanussi was appointed King of Libya with the help of the same colonial powers that had decimated his people and fought against his grandfather, uncle and mentor. Although pious, King Idris was little more than a puppet in the hand of outside powers. In 1969, King Idris was overthrown by a military coup led by a young captain called Muammar Gaddafi.

For a brief moment, the people of Libya allowed themselves to dream that they may have achieved victory. Unfortunately, their hopes were dashed as they watched the ambitious young Captain quickly take on the persona of the tyrants that they had been fighting and becoming ever more repressive. For the next 42 years, freedom was put on hold. Until now. The majority of the Libyan people have risen up once more, refusing to give up even when Gaddafi brought his vengeance to the gates of Benghazi. As NATO and the West implement a No-Fly Zone and launch air strikes to prevent a massacre on the scale of Rwanda, the fate of Libya still rests in the balance between the armies of a murderous dictator and the true sons of the Sanussi.

Human right abuses in Bahrain | The jihad of Zainab Al-Khawaja