The Qur’an is a treasure trove of gems and jewels. For the one who diligently seeks them, it can provide any or all of the following priceless blessings required for spiritual growth and rejuvenation: knowledge, insight, understanding of reality vs. illusion, the ability to identify causes of day-to-day situations and human reactions to them, a variety of psychological behavioral traits displayed by people in any era of time, and a deep grasp of the concepts of life, death and the afterlife. 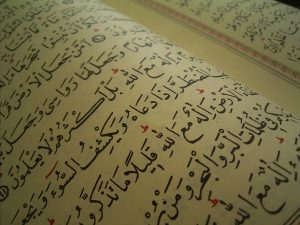 Not just this, but the Qur’an also details numerous past, real-life, historic events accompanied by dialogues that actually took place centuries ago between people, necessitating the student of knowledge to dig deeper into the context behind the revelation of its verses, and to consult other reliable sources for details of the events in the lives of previous prophets and bygone nations, with the most authentic of these sources primarily being  hadith collections.

Last but not least, one of the greatest gems that can be extracted from this Glorious Book is the immense enjoyment of communicating directly with Allah through un-rushed, beautified and deliberate recitation of His كلام – His own spoken word. Such recitation results in the subsequent descent of, and the feeling of being enveloped by, His Divine mercy or رحمة.

All of the above are blessings and treasures that can be derived from this ‘treasure chest’ – the Glorious Quran – to name but a few.

Yes, the Quran is indeed a treasure trove of gems, but only for the one who seeks them from this trove with the correct intention, and via correct branches and sources of knowledge, which include the rules of tajweed and other supplementary subjects.

One of the most popular – and also often the most feared – subjects that a student of knowledge pursues to understand the Quran better is Arabic Grammar. Comprising mostly of a set of lexical rules derived to help understand Arabic as a language, Grammar is sometimes a difficult nut to crack. Nay, it is many a students’ most ardent nemeses!

I admit that I have heard some extremely polarized views about this subject from different people, be they experienced teachers or frazzled students at their wits end; students ready to pull their hair out over sincere but futile efforts to memorize the complex, multidimensional tables of Arabic pronouns, nouns and verbs!

Some are of the opinion that Arabic Grammar makes it difficult and confusing for a student of knowledge to get a grasp of the language. They opine that memorization of tables does not help if, at the end of the day, the student cannot apply its basic concepts to comprehend the actual Quranic text.

Others stand by the claim that memorization of the complex noun and verb tables of Arabic Grammar is one of the secrets to unlocking the deeper meanings of the comprehensive yet compact (جامع) words in the Quran.

As a work-in-progress student of knowledge, I admit that I hold the latter opinion. I have benefited tremendously by studying basic Arabic grammar. However, my primary concern was never memorizing the tables just to get good marks in tests, but rather, to apply the knowledge of grammar to the Quran’s Arabic text in order to scoop out meanings from it that simple language translations did not adequately convey.

Below, I will attempt to express the importance of studying Arabic Grammar by explaining 3 examples of words found in different places in the Quran.

The above portion of this verse carries 2 Arabic words that sound incredibly similar to each other, and they occur consecutively. In fact, the only difference between the two words آمَنُواْ and آمِنُواْ, is changing the fathah (فتحة) on the “م” into a kusrah (كسرة):

The change of that single fathah into a kusrah changes the entire meaning of the same set of letters. Whereas the word “آمَنُواْ” means “those people who have believed” and is a verb or action-word, the word “آمِنُواْ” means, “Believe, you all!” and it is not a verb per se but rather, “a command verb” i.e. an action word that is meant as a command to someone. In grammatical lingo, it known more formally as the “imperative verb”, but I prefer referring to it as the “command verb”, because it is known in arabic as فعل امر.

You can understand it with this analogy: we say, “Eat!” to someone when commanding them to eat, but we also say the word “eat” as a verb in other contexts, e.g. “We will eat in an hour”.

The beauty of the Arabic language is that it uses separate combinations of the same set of root letters (in this case, these letters are: م , ا , and ن), with different sounds for those letters, denoted by vowels, to openly display these differences in meaning very beautifully.

(Please click here for a more detailed, word-for-word, grammatical analysis of the above verse.)

For the next example, here is a verse from Surah Aali `Imran:

“O you who believe! Persevere in patience and constancy; vie in such perseverance; strengthen each other; and fear Allah. That you may prosper.” [Quran – 3:200]

In the above verse, again, two very similar words come right one after another. They are:

Isn’t it obvious how powerful the language of the Quran is? How beautifully it conveys different meanings by adding or moving around just one consonant/letter in a word, or the vowel on it?

Now let’s look at the third example. This one will present how knowledge of Arabic grammar helps in pondering more deeply on the verses of the Quran, to get a more detailed picture of what is being said:

This verse of the Quran contains two command-verbs which have the pronoun “هُ” appended at their end. Both the words, “خُذُوا” and “غُلُّوا” are command-verbs directed at several masculine recipients, or a group of men. This is apparent because of the “وا ُ ” appearing at their end.

This presents an interesting insight into this verse. The English translation says, “Lay hold of him“, but analysis of the Arabic command verb “خُذُوهُ” reveals that, actually, several beings are being addressed to “lay hold of him”, not one person.

This unveils knowledge of a bone-chilling scene that shows us a picture of what will happen to wrong-doers in the Akhirah: numerous angels will be commanded by Allah to hold and shackle one sinning human being, and then thrust him into the Hell-Fire!

The next verse, shown below, completes the terrifying picture: 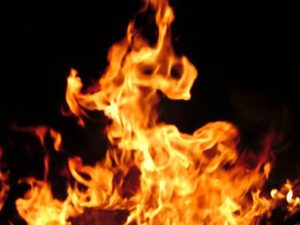 Another command-verb “صَلُّوا” occurs in this verse, having the pronoun “هُ” appended at its end. The meaning is the same: an order from Allah to several angels to throw the person referred to by the pronoun “هُ”, into the Hell Fire.

“And then thrust him into a chain [of other sinners like him – a chain], the length whereof is seventy cubits.” [Quran – 69:32]

Finally, using the command-verb “اسْلُكُوهُ”, Allah commands the numerous angels to pass the sinner onto a chain of others like him.

Allah’s words, “Seize him and fetter him; then throw him in the blazing Fire” mean that He [Allah] will command the guardians of Hell to forcibly remove him from the gathering place, fetter him – meaning put iron collars on his neck – then carry him off to Hell and cast him into it, meaning they will submerge him in it.

“Then fasten him on a chain whereof the length is seventy cubits!” – Ka`b Al-Ahbar said, “Every ring of it will be equal to the entire amount of iron found in this world.”

Al-`Awfi reported that Ibn `Abbas and Ibn Jurayj both said, “Each cubit will be the forearm’s length of an angel.”

Ibn Jurayj reported that Ibn `Abbas said, فَاْسْلُكُوهُ (“then fasten him“) “It will be entered into his buttocks and pulled out of his mouth. Then they will be arranged on this (chain) just like locusts are arranged on a stick that is being roasted.”

Al-`Awfi reported from Ibn `Abbas that he said, “It will be ran into his behind until it is brought out of his two nostrils so he will not be able to stand on his two feet.”

Arabic Grammar thus enables us to understand certain things whilst reciting or reading the Arabic text of the Quran directly, without needing an accompanying translation or consulting a tafsir.

As shown above, the tasfir makes it clear that several angels – in the role of the guardians of Hell – will be taking hold of, fettering and thrusting each Hell-dweller into either (i) a chain of other sinners headed for Hell, or (ii) an extremely huge iron chain that will be passed through his body like a skewer. This terrifying picture of several harsh, stern angels working together in a group on one sinner at a time sends chills down the spine.

We seek refuge with Allah from the torments of the Akhirah. Ameen.

I hope I have been able to effectively convey and present the ease that is provided to a student, by studying Arabic Grammar, in understanding lexical technicalities in the Quran’s Arabic text, which does away with the need to always consult a translation.

I know that studying Arabic grammar can be a challenge at times. Here a few tips that can help:

When you proceed like this, keeping a positive approach and a never-give-up attitude that transcends official courses and classroom lessons taken under teachers, Allah’s help will come in the form of ease and barakah, insha’Allah, granting you insights into the language of the Quran, which you never anticipated that you could experience!

The Best of Stories: Pearls from Surah Yusuf | Part 1

Parables in the Quran: The Spider’s Web