I live in a hot, humid city where creepy crawlies of all sorts elude insecticides and abound. Routinely, I need to have discreet cobwebs removed from the corners of ceilings and from behind cupboards. The dextrous creators of these webs can rarely be seen prominently, but sometimes perchance they are spotted descending from their lofty abodes onto lower surfaces. To the naked eye, a spider appears to dangle in mid-air on its own, its thread almost invisible. 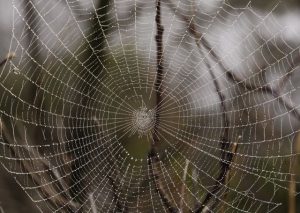 As I recently observed a spider slowly but surely descend downwards, I marveled at its dexterity of producing a silken thread from within its own body, which enables it to build a home for itself.

That was when the verse about the spider’s web in Surah Al-Ankaboot came to my mind:

“The parable of those who take protectors other than Allah is that of the spider, who builds (to itself) a house; but truly the flimsiest of houses is the spider’s house;- if they but knew. ” [29:41]

The singular form of the Arabic word اَولِيآء (“auliyaa”) that is mentioned in this verse, is ولى (“wali”), which means “protector, helper, governor, king, ruler, or judge”.

Tafsir Ibn Kathir says about this verse: “This is how Allah described the idolators in their reverence of gods besides Him, hoping that they would help them and provide for them, and turning to them in times of difficulties. In this regard, they were like the house of a spider, which is so weak and frail, because by clinging to these gods they were like a person who holds on to a spider’s web, who does not gain any benefit from that. If they knew this, they would not take any protectors besides Allah.”

Tafsir Al Jalalayn: “The likeness of those who choose besides God [other] patrons, namely idols from whom they hope to profit, is as the likeness of the spider that makes a home for itself in which to shelter. And truly the frailest, the weakest, of homes is the home of the spider – for it neither protects it from heat nor cold – likewise, idols cannot benefit those who worship them – if they only knew this, they would not worship them.”

According to this verse, the action of taking any other besides Allah as a judge or helper is like a spider spinning a web for itself. How does a spider spin its web?

It starts by shooting forth a single thread with a sticky end that attaches itself to a sturdy support nearby, which it might happen to fall on. Notice the uncertain nature of the start of the process? The spider has no idea what the thread will attach itself to, or if it will at all. Ironically, it makes an abode for itself by starting with a single thread in this uncertain manner!

Once attached to a sturdy support, the spider goes along that fixed thread, dropping another thread downwards, which dangles in the air. It moves back along the dangling, second thread and from its middle, lowers itself downwards on to another support. When it lands on the latter, it uses it as the third point of support for its web. It continues thus to weave more threads fixed on other nearby supports until it establishes a web of non-sticky threads. It further moves radially around these base threads to form another network of threads within them.

Finally, when the web is ready, the spider leaves a sticky fluid over it to snag prey, leaving room for itself to move around (avoid) that fluid as it maneuvers its way around its new “home”, then proceeds to sit in its center.

For a very simple video describing the process of how a spider spins its web, along with a more detailed written description, please click here.

Here are a few thoughts that come to mind about this spider’s web:

We can now analyze how taking protectors or helpers (اَولِيآء) besides Allah is akin to a spider spinning a home for itself. When I thought about this verse, I pondered on what the word ولى means. Does it mean that if I follow the verdicts or laws of those who do not rule according to the laws of Allah, or if I believe others besides Allah to be my helpers or protectors in difficulties and hopeless situations, I am like the web-weaving spider in my adherence to beliefs that are false? 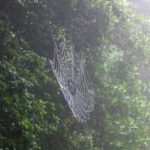 Like the spider that attaches its threads to sturdy supports and spins a web for itself, I too, would be taking support from apparently stronger objects/things/deities to form a web of delusion inside my head, which would not harm anyone but me if and when it got destroyed because of its inherent weakness. Just as a spider-web’s gluey attachment to the objects to which its silk threads cling is frail and weak, the hopes I would have on any other people, gods, deities or objects for solving my problems or providing laws for me to live successfully by, would be extremely feeble, even though these deities, like a spider web, might give the impression of being secure, safe “abodes” to the “spiders” sitting in their midst.

Here I would like to point out that seeking the help or support of others to achieve an end is not at all blameworthy or wrong in itself, as long as a believer has the staunch aqeedah in his heart that the source of all benefit and loss is solely Allah. Allah helps, protects and provides for His slaves on earth by different means. There is nothing wrong with seeking those means, as long as one believes, beyond any doubt in their heart, that the source of both – the means and the end – is Allah – our only ولى.

The parable of the spider weaving a weak home for itself is like that of a sick person who believes that a certain doctor they went to, or a medical procedure they underwent, was the source of their cure from an illness, instead of believing staunchly in Allah being the sole source of that cure, with all else being just the means. Or, like the simile of a woman who believes that the source of her provision is her or her spouse’s business or job, which, if it were to be lost, or if her husband were to die, would curtail her provision or her life itself. Or like the justice-seeking, wronged person who believes that the verdicts and laws of any thinker, organization, or man-made socioeconomic and legal system is more suitable than that revealed in the Quran by Allah, or that which was ordained by His Messenger [صلى الله عليه وسلم].

Such fallacious delusions are analogous to a spider’s web-weaving, because such concocted beliefs and false ideas are “spun” by innate human desires, or by erroneous thoughts whispered into the hearts by Shaitan, making their bearers disastrously secure in the delusion that what they believe is actually reality, just like the spider believes that its frail, thread-based abode is sturdy and safe from danger, right up to the point when it is washed or swept away.

Just as the spider’s web is the weakest of abodes, so are all the idols that are worshipped, or considered sources of support, help, provision or justice by people, utterly weak and fallible.

Now please ponder on this verse in light of the scientific facts about the process of a spider’s web-weaving/abode-building, and share your thoughts with us.