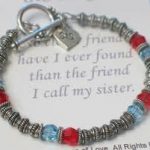 Nothing compares to the pleasure of bonding with your sisters. Romantic love is not the only joy de vivre.  It takes time spent with your sisters to feel the delight of simple, soul  connections. I am replenished, rejuvenated. The spontaneous burst of laughter, finishing each others thoughts and sentences, the ‘not’ needing to explain a phrase. Masha’Allah, after 4 whole years my gorgeous sisters and I were in one place.  We bemoaned how much like our mother we had become and then thanked Allah for a mother like her.  We spent lazy mornings in PJs with waffles and Washington blueberry sauce, exchanged recipes – ours, Ammi’s, our mothers-in-law’s, our cousins. We ate without abandon through boxes of gourmet cupcakes, Pacific salmon with almond-crusted asparagus and creamy butter chicken. We laughed, giggled and shopped like teenagers. We missed our only brother like crazy. Alhamdulillah for the many blessings. We celebrated one sister’s achievements, running an institute named after a mother of the believers (radhi Allahu ‘anha), the Ayesha School, with a potluck in a quaint house behind the Abu Baker Masjid.

We thought Aboo (our father) would have loved this – “pack up the car! instant picnic.” We marveled at the beauty of the Puget Sound, strolled Pike Place sampling Snoqualmie Valley honey, berries & Le Panier eclairs & of-course coffee. And then there were the tulips at Der Roosengarten. We were just in time for the Skagit Tulip Festival. SubhanAllahi wa bi hamdihi was on all our lips, “so we can have gardens like that in Jannah” said my daughter. Ameen, my daughter, Ameen. 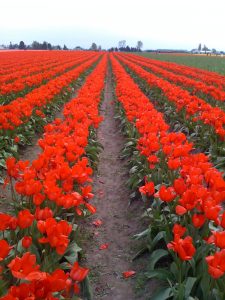 We know each other’s strengths, faults, weaknesses, positive energies, failures, tragedies, dramas, likes, pet peeves, shortcomings, victories. With each other we have to be real because we know; its amazing not to have to pretend.  We see how much we have grown spiritually and emotionally because we were there in the beginning.

When our souls were first created, theirs must have rested next to mine for Allah to choose them as my sisters. They are my childhood; they remind me of things long forgotten like an old family video but brighter, more colorful and from different angles. Sometimes you don’t even need words; a look, a frown, a smile gives away the emotions. She is what I could have been.

A sampling of memories of our triad – sisters are flowers from the same garden.  Our mother was left trianthous, our eldest sister passed away in childhood. May Allah (subhanahu wa ta’ala) reunite us in Jannah.

She sobbed in dua (prayer) for you when you were losing your baby at the emergency room. She held your hand during your C-section and welcomed your daughter with Takbeer.  She has become an amateur matchmaker in hopes that Allah will help her find the perfect match for you.

She secretly fasted on your roza khushai (first fast celebration) and stole your thunder. She stayed up all night to put henna on your hand for your shaadi (wedding) because you didn’t want it done by an impersonal professional. She urged you to wear abaya, “just do it, don’t wait,” she said.  She nursed your baby because she was crying, and you weren’t there.

She was your first baby before you ever bore any from your own womb, the first diaper you changed, the first nose you wiped. She held your dupatta (veil) as you walked up the aisle for your Nikkah. She took your kids to the zoo on Eid while you were away at Hajj. She didn’t need to tell you she loved her gift, you could see the same look of giddy satisfaction as when she got presents at birthdays past.

You keep your past by having sisters. As you get older, they’re the only ones who don’t get bored if you talk about your memories.
– Deborah Moggach

Cousins bickering over toys, over who loves each other more. We find each other in our children. A lift of an eyebrow, a throaty laugh, same toddler gibberish. My children need to see us loving each other so unconditionally, a model for what their future relationship should be like, God Willing. A day after we land back, my two year old says, “Mama remember when we went to Khala jaani’s house?  Can we go there again…TODAY?” I wish, sweetie, I wish…

The first pair of sisters that immediately comes to mind in Islamic history is  our mother Ayesha (radhi Allahu ‘anha) and her sister Asma bint Abu Bakr (radhi Allahu ‘anha). They were both Abu Bakr Siddiq’s (radhi Allahu ‘anha) daughters and also had a half-sister named Umm Kulthum.  Ayesha (radhi Allahu ‘anha) would often ask her sister, Asma, to nurse young children (mainly orphans) – this way she would become their mahram and would teach them.  Since Ayesha (radhi Allahu ‘anha) did not have children of her own, she adopted her nephew’s (Asma’s son’s name) as her kunya– Umm Abdullah.  How deep a bond between sisters to be known as the mother of your child.  I know sisters who have given up their children to their siblings who do not have biological children of their own, so they too may enjoy this great blessing.  Abdullah once said of her, “I have not seen two women more generous than my aunt Ayesha and my mother Asma.  But their generosity was expressed in different ways. My aunt would accumulate one thing after another until she had gathered what she felt was sufficient and then distributed it all to those in need. My mother, on the other hand, would not keep anything even for the morrow.”

Another model for sisterhood that we find in in the daughters of the Messenger of Allah’s daughters: Zaynab, Umm Kulthum, Ruqiyyah and Fatima az-Zahrah.

Mariam (radhi Allahu ‘anha)’s mother Hanna (Anne) also had a sister Aashya (Elizabeth). Maryam and her aunt were both gifted with the pure souls of Prophet hood in their wombs, Hazrat Eesa (‘alayhi salaam) and Hazrat Yahya (‘alayhi salaam). Hanna and her sister both chose to give up their children to the service of Masjid al Aqsa.

Our Mother Khadijah’ sister’s name was Hala. She named her child from her second husband, Hala, after her sister. Their voices sounded so much alike that the Messenger of Allah (sal Allahu ‘alayhi wa sallam) would recognize it from behind the door when Hala called out to him, years after our mother, Khadijah, passed away. Khadijah married her daughter Zaynab to her sister’s son, Abdul-As.

A khala (mother’s sister) is an eligible custodian of a child after the maternal/paternal grandmother if his or her mother passes away. In fact, in the Maliki fiqh the khala‘s right precedes the paternal grandmother’s.  We find the importance of this bond of the womb, from a hadith of the Messenger of Allah (sal Allahu ‘alayhi wa sallam).

This is further supported by a hadith related by Tirmidhi

The Messenger of Allah (sal Allahu ‘alayhi wa sallam) said, “Allah says: ‘I am Al-Rahman (the Most Merciful) and this rahm (tie of kinship) has a name that is derived from My name. Whoever upholds it, I will take care of him, and whoever severs it, I will cut him off.’” (Narrated by al-Tirmidhi, 1907; Abu Dawood, 1694). Her rights over you are that you love her for the sake of Allah, teach her Islam, give her sincere advice, that you do not back-bite about her in her absence, you conceal her sins and shortcomings, and that you are there for her  in her time of need.  If you love something for yourself then you love it for her as well (yeah – get two of that hijab next time you are shopping). Keep her secrets, don’t laugh at her or make fun of her. Wash and shroud her dead body, care for her orphaned children, pray for her and ask for her maghfirah.

May He who made us sisters, give us the ability to maintain the ties of kinship, to be the best sisters, aunts, and nieces that we can be. Ameen.

Fighting for Our Youth: A Case Study of a Muslim Youth Group