Friday was the last day of Hajj. Mina the tent city, which came to life only during the days of Hajj is now suddenly empty, again. The Hajj season is officially over.

While you read through this article, the hujjaj will be wrapping up their things and folding their mats and tents to head toward their hotels in Makkah or perhaps to the airport to return home. For some, they’re getting ready for the next leg of their spiritual journey, going to Madinah.

On the last day of Hajj, the hujjaj who stayed two days in Mina or chose to stay the extra day on Friday, were obligated to continue the same rites of Ayyam-ut-tashreeq, explained in a pervious post. They were required to throw stones at the three posts of jamarat, seven pebbles each, before they leave Mina.

The sight of an empty Mina is really depressing, especially after getting used to the hustle and bustle and the hectic schedule of Hajj and life in Mina. Now they’re all gone, the people whom they met for the first time in their lives and made friends with and perhaps this will be their last time to see them again.

During their final stay in Makkah, the hujjaj make sure nothing of their obligations is left without being fulfilled or compensated for. So if there was any violation committed during their Ihram or stay in Mina, they make sure to amend it in the proper way. In some cases, the hujjaj are required to pay ransom for some of these mistakes. The ransom can be paid in the form of fasting, feeding the poor or offering a sacrificial animal. Allah subhanahu wa ta’ala said:

“And complete the Hajj or ‘umra in the service of Allah. But if you are prevented (from completing it), send an offering for sacrifice, such as you may find, and do not shave your heads until the offering reaches the place of sacrifice. And if any of you is ill, or has an ailment in his scalp, (necessitating shaving), (he should) in compensation either fast, or feed the poor, or offer sacrifice;…” al-Baqara 2:196

And in another scenario in Hajj, Allah says:

“O you who believe! Kill not game while in the sacred precincts or in pilgrim garb. If any of you does so intentionally, the compensation is an offering, brought to the Ka’ba, of a domestic animal equivalent to the one he killed, as adjudged by two just men among you; or by way of atonement, the feeding of the indigent; or its equivalent in fasts: that he may taste of the penalty of his deed. Allah forgives what is past: for repetition Allah will exact from him the penalty. For Allah is Exalted, and Lord of Retribution.” al-Ma’edah 5:95 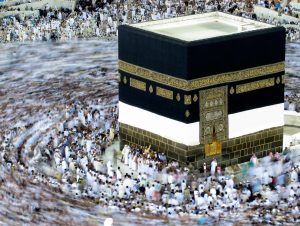 Once the hujjaj have taken care of all the essentials of Hajj, they prepare themselves for their departure from Makkah. The sunnah of the Messenger of Allah (salla Allahu alayhi wa sallam) is to perform Tawaf al-Wadaa’ or the Farewell Tawaf right before the departure from Makkah. It is considered wajib or obligatory to perform this Tawaf for those who are physically fit. In case of woman whose menstruating period already started, according to the majority of Muslim jurists she is not obligated to perform that Tawaf nor is she obligated to have someone do it on her behalf. This is according to hadith of Aisha (radiyallahu anha) who reported that Safiyyah the wife the Prophet had her period right before they were about to leave Makkah, and when the Messenger of Allah heard the news he said in awe and shock: “Is she going to hold us all back?” Speaking of the entire Hajj congregation, but then he asked if she has already done her Tawaf al-Ifaada, which is the major Tawaf of Hajj. Upon learning that she had already done it, he ordered all to depart (Bukhari and Muslim).

Some of the hujjaj who were unable to perform Tawaf al-Ifaada earlier due to their legal excuses, would do that Tawaf in place of Tawaf al-Wadaa’. They perform their Tawaf around the Ka’bah and then do the Sa’i between the hills of Safa and Marwa, if needed.

The best scenario for the hujjaj is to take care of their last minute shopping before they do their Tawaf, for it’s better to keep the last memories in Makkah around the Ka’bah instead of the market place. There is no harm in getting anything from the market on the way back to the hotel as long as the hujjaj are still in transit awaiting their final departure. If they decide to stay longer, such as spending the night in Makkah, in this case another Tawaf should be performed because the previous one is no longer considered a Farewell Tawaf anymore.

Many of the hujjaj depart from Makkah with sorrow and grief, and just as they arrived with tears and joy, they are now leaving with tears and a mixture of perplexing sadness and happiness. Nevertheless, they all leave with hope that their Hajj was Mabroor or faultless and that Allah has accepted their offerings during these days of great sacrifice. They all leave with hope that this experience was a true redemption from sin and an emancipation from the snares of this dunya.

And here are some signs, among others, of a successful Hajj experience:

A great feeling of comfort and relief.

Being grateful and full with gratitude.

Repenting to Allah and showing remorse.

Committing one’s life afterwards to the worship of Allah.

Overwhelming feeling of kindness and generosity.

To return back to normal life but with a completely different perspective.

May Allah accept the Hajj of hujjaj, make it Mabroor and faultless and bring them all back home safe and sound, with their sins forgiven just like the day when they were born. Ameen

The Month of Allah | Muharram