15th September 2010 – today marks a month since the occurrence of a heart-wrenching incident that took place in Sialkot, Pakistan; an incident that has the whole Pakistani nation aghast with shock and horror up till now.

It was the 4th day of the holy month of Ramadan when two teenaged brothers, Mugeeth and Muneeb, decided to leave the house to go play cricket after eating the pre-dawn meal, Suhoor i.e. they were fasting. En route to the ground on their motorbike, it is alleged that they happened to pass by an angry mob that had gathered in protest to a local burglary in which a fleeing dacoit had shot and killed an innocent man. The angry mob was in desperate search of the guilty dacoits. Someone from the crowd pointed at these two brothers and claimed that they were the dacoits. 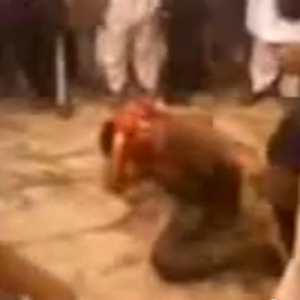 What followed was an atrocious “gang crime”, the absolutely shocking and decadent nature of which, cannot be adequately described in words.

The two brothers were beaten up by the area people in broad daylight, with metallic and wooden sticks, as the mob watched and some members of the passive “audience” decided to whip out their cell phones and make videos. The people beating them up included everyone from older men to minor boys, as the videos recorded by the witnesses standing nearby clearly show.

Some of the crowd can be seen urging the enraged perpetrators to continue beating them up, ignoring their pleas for mercy and help. The bloodied boys were completely at the mercy of the crowd, which included some policemen and also the area DPO.

As if this slander and subsequent cold-blooded murder of these two innocent boys was not enough, after they had died, their bodies were tied up, hung from poles in the open ground where a large crowd of the area people was still gathered, and later on paraded on a pickup truck for the entire city’s population to see.

I have personally watched the gruesome videos that are available on youtube before writing this. I can testify that indeed, the police were there when this 2-hour long incident took place in broad daylight, in addition to a large number of passive onlookers who let the horrific crime continue unabated. According to reports, Rescue 1122 had been summoned but it was unable to save the injured older brother Muneeb, who sustained his injuries long after his younger brother succumbed to them and died, from the mob that would just not let up beating him up with sticks and stones.

The different facets of this incident that come to light are indeed appalling to analyze:

What we need to remember is that public lynching and other such crimes should not, however atrocious they might be, entice us to give such free reign to our tongues that we start broadly cursing, abusing, and invoking Allah against all and sundry.

We have to keep one positive thing in mind: that the two boys can indeed be hoped to have died as martyrs, not just because they were fasting when they were killed, but because they were lynched by a barbaric mob for committing no crime at all. Also, as the neighbors, family members and others who knew them have testified, they were decent, pious boys from an honorable family who never did anyone any harm. One of them, the older one, was even a hafidh of Quran, as his mother has admitted to the media.

The evidence for the fact that we can hope their death to be considered martyrdom is this hadith of Sahih Al-Bukhari:

It was narrated that Anas ibn Malik said: The Prophet (صلى الله عليه وسلم) climbed up Uhud, accompanied by Abu Bakr, ‘Umar and ‘Uthman, and the mountain shook with them. He struck it with his foot and said: “Stand firm, O Uhud, for there is no one on you but a Prophet or a Siddeeq or two martyrs.” [Al-Bukhari 3483]

We know how the Caliphs `Umar and `Uthman were killed – unlawfully, for committing no crime; one of them by a mob of rioters. They were among the few companions who were given the glad tidings during their lives, of being admitted to Paradise in the Hereafter.

You may choose to watch the gruesome video of the lynching here, and the subsequent dishonoring of their bodies here, at your own discretion (youtube log in required). Faint-hearted and sensitive readers are requested not to watch these two videos. This is a real-life crime caught on tape; it can really affect you adversely.

When I first heard of this incident, I thought of their martyrdom and how they were indeed chosen by Allah for supreme honor in the Hereafter. However, what their families have gone through and the pain that they will continue to experience for years to come is unimaginable – it is indeed a major trial of their faith and steadfastness on being pleased with Allah’s decree. The women of the family have not kept silent and have spoken to the media openly.

I was reminded of Ibrahim [عليه السلام] as a young lad and how an angry, murderous mob comprising of his own father and community, first prepared a fire to burn him in, then deliberately threw him into it, just because he had dared to break their idols in their absence. Another incident that comes to mind is that of the the third Caliph of the Muslim ummah, Uthman Bin `Affan, who was besieged in his house by a mob of rioters and eventually got martyred because he refused to raise his sword against them, even to defend himself.

As for these two brothers, they laid down their lives in this gruesome incident that will serve as a graphic and painful reminder for us all – the Pakistani nation as well as the rest of the world – to the glaring truth: that when moral decadence reaches its lowest low, human beings become even worse than the lawless animals in a jungle.

May Allah be pleased with Muneeb and Mugeeth, and grant them martyrdom and supreme honor in the Hereafter. May He grant patience in its most superlative form, sabr jameel, to their grieving family. Ameen.

Please take a moment to pray for the boys and their bereaved family.

Ramadan and Eid Around the World: In Egypt for the First Time