Preface: Originally posted on my personal blog, I debated whether or not to put this (partially edited version) up on MuslimMatters. It’s a pretty introspective piece and I’m honest about the fact that, yes, I have a friend that I care about in the U.S. Army. I suspect I’m not alone. If this doesn’t sit well with you, I respect that. I hope the respect will be mutual, inshAllah. 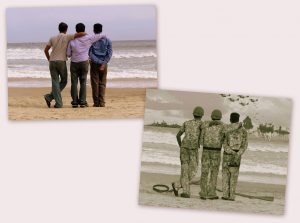 Looking back at it, I have to say I had a pretty blessed childhood. Sure, I went through all the trials that accompany adolescence, which at the time probably felt colossal. But in hindsight, I had all I could wish for: two great parents, a loving (if often annoying) sister, the greatest city in the world and, most importantly for any male coming of age, a group of loyal friends.

Like most people, I suspect, I had a number of acquaintances but only 3 or 4 core friends with whom I spent most of my time: Danny, Chris, Steve and Dave. Throw me in the mix (Joseph) and I guess we had the makings of a new gospel. Instead, we mostly just played videogames and street hockey. Over the years, we’d grow apart, grow back together, and along the way manage to grow up (to varying degrees).

Though we each began high school around the same period, this would be the last time we were all on the same page. Within a year or so after school started, Chris became a working man and, just in the past few months, got married and moved to Austin; Dan and Dave similarly got their GEDs and each remain in New York today pursuing careers as musicians; and, as for me, I left Brooklyn to find knowledge, came back to find work, and left again to find inspiration. Then there’s Steve.

Steve, and I say this lovingly, was a putz. Or perhaps goon is more apt? In any case, he wasn’t the most together guy. Still, he was our boy.

Imagine our surprise though when he told us that he joined the army.

Be All That You Can Steve

I say joined the army because Steve, in his infinite wisdom, didn’t come to us WHILE he was considering this life altering move, but only AFTER he had signed with the recruitment officer. Classic Steve. This all took place sometime during 2004, if I remember correctly, so this genius decided to join the U.S. Army in the middle of not one, but TWO foreign wars.

The whole scenario confounded Dan, Chris, Dave and I. Had it been out of some newfound patriotism that Steve decided to join the armed forces, perhaps we could’ve made some sense of the situation. Near as we could tell, however, Steve had been lured in by the recruiter’s sales pitch (a $10,000 signing bonus is tempting to a young adult…unless you actually sit down and do the math). So, when we all managed to get together for an ex post discussion of the matter, all we could do was what came naturally – crack jokes (many of them at Steve’s expense).

Steve had made his decision. We were comforted at the time though by the fact that he had signed on to be a cook (even though, so far as we knew, he could barely make a bowl of cereal). In any case, I couldn’t resist getting one more jab in as he was about to leave.

“If it hits the fan, Steve, don’t be a hero and reach for the paprika.” And with that, he was off.

In the years that followed Steve’s departure, my studies, college life and real life caused me to lose touch a bit with my buddies back home. Through occasional phone calls, however, I learned that Steve’s role in the army wasn’t exactly what he envisioned. As it turned out – surprise, surprise – the recruiter wasn’t entirely forthcoming and Steve was shipped off to combat duty in Iraq.

I believe he’s seen a few bases during his tenure with the army, but I’m pretty sure he’s spent the better part of these past half dozen years fighting along the Tigris and Euphrates. Despite being dealt a raw hand, Steve held his own and, wouldn’t you know it, even managed to build up some of that character and grit the army ads are always talking about.

Today, Steve is not only married, but the father of multiple children! This, mind you, is the same individual whose strange and spastic ways back in the day inspired numerous parody songs within our crew. Now here he is, raising a family and leading men into battle. It’s the latter of these newfound responsibilities that’s never sat well with me.

Two winters ago, I got to see Steve for the first time since his deployment. He still retained much of his lanky awkwardness, but was definitely changed – clean cut, confident. To my relief, he wasn’t brainwashed. In fact, he felt the war was just as unnecessary as I did. That belief was of little consequence, however, in the heat of battle.

A Dark Reality – And Bright Truth

Steve wasn’t callous enough to bring up the gritty details of his duties. He realized, I think, how touchy the subject would be – especially since I had drawn nearer to Islam in the intervening years (my religious identity had been nascent, at best, when Steve was still around). I sensed, too, that Steve similarly avoided the matter partly from an increased God-consciousness (surprising, given that Steve’s Christian background never really affected his outlook on life pre-army). Yet, despite our best efforts, the issue didn’t stay buried for long.

While Steve and I appreciated the magnitude of what he was doing, some of our friends equated his time in Iraq to a Call of Duty cut scene.

“Tell him how many confirmed kills you had,” one of our buddies urged Steve on with a satisfied elbow nudge.

Thirty-two Muslims dead at the hands of my childhood friend. Without knowing the circumstances of the combat or motives of the combatants, I still couldn’t help but loathe what Steve had accomplished. I believe he sensed my unease, and we let the issue drop.

I haven’t seen Steve since then, who’s still stationed in Iraq. My image of the kid I grew up with certainly changed the moment I learned firsthand the extent of his involvement in the war. I wasn’t quite sure how to process what I learned that day. Since then, Steve and I have only been in touch a handful of times – not because of any tension between us, just busy schedules. His most recent message, however, was as timely at it was edifying.

hey brother happy Ramadan i hope it brings your family peace and prosperity. ive had a unique experience being a non muslim in a muslim land during a holy time. not once but twice. and still i am amazed. the will of you and your fellow muslims is astounding. no matter whom we pray to i wish you and your family all the best. i miss you man.

Here’s a soldier in a war zone seeing humanity and strength in the faith professed by the those shooting at him, while simultaneously many Americans are vilifying and objectifying Muslims on account of a property dispute.

It brought home for me the only way I could reconcile wanting Steve to stay safe while hating the current consequences of his safety: I want my friend to come home.

I hope, and pray, that all soldiers return soon. In the meantime, may they gain perspective and understanding from their crumby situation. Ameen.